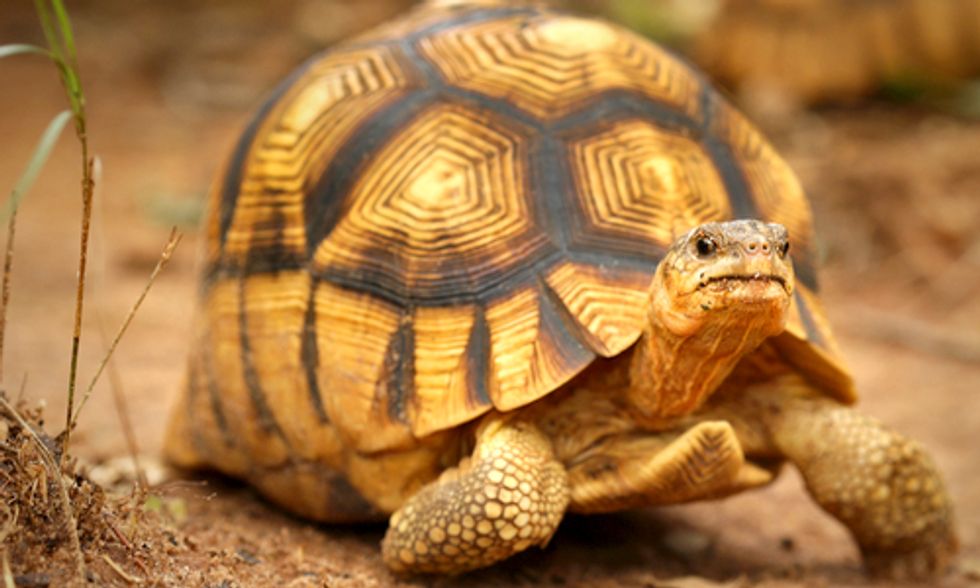 Conservation organizations fighting to save one of the world’s most threatened tortoises from poachers have resorted to a drastic measure—engraving identification codes onto the animals’ shells to reduce their black market value.

Although fully protected, Ploughshare Tortoises are prized for their beautiful high domed shells, but are being pushed closer to the brink of extinction due to high demand as unique and exotic pets. Engraving a tortoise’s shell makes it less desirable to traffickers and easier for enforcement agencies to trace.

Ploughshare Tortoises are prized for their beautiful high domed shells and are trafficked illegally. Conservation groups engrave the shell to make it less desirable to poachers. Photo credit: TRAFFIC

Found only in north-western Madagascar, the tortoise is critically endangered and only an estimated 400 adults remain in the wild. Numbers have been devastated through illegal collection and export to meet the international demand for the pet trade, especially in South-East Asia, where they are sold in markets particularly in Indonesia, Malaysia and Thailand.

This case exemplifies the audacity of smugglers, the urgency of the situation and the need for enforcement agencies to take the illegal trade in this species seriously. Based on seizures reported in the media, at least 86 Ploughshare Tortoises have been seized since 2010. More than 60 percent of these seizures occurred in Thailand while remaining seizures took place in Madagascar and Malaysia; with at least one of the shipments destined for Indonesia.

The Ploughshare is found only in north-western Madagascar and is critically endangered—only 400 adults remain in the wild. Photo credit:
TRAFFIC

Four organisations—Wildlife Reserves Singapore, TRAFFIC, Durrell Wildlife Conservation Trust and Turtle Conservancy—joined forces to hold a “Tattoo the Tortoise” event today, Dec. 16, at Singapore Zoo to raise awareness of the plight of the Ploughshare and to build support to fight trafficking in the species.

Singapore Zoo currently houses two Ploughshare Tortoises which were confiscated by the Agri-Food and Veterinary Authority of Singapore in 2009. The pair will be used to establish an “assurance colony” in Singapore. The top shell of each tortoise was engraved during this event—a first for South-East Asia.

The event included presentations by experts working on the conservation of these tortoises and an exhibition open to the public. These activities provide an opportunity for the public, governments and other relevant bodies to learn about the dire situation these animals face, and what they can do to save the Ploughshare Tortoises.