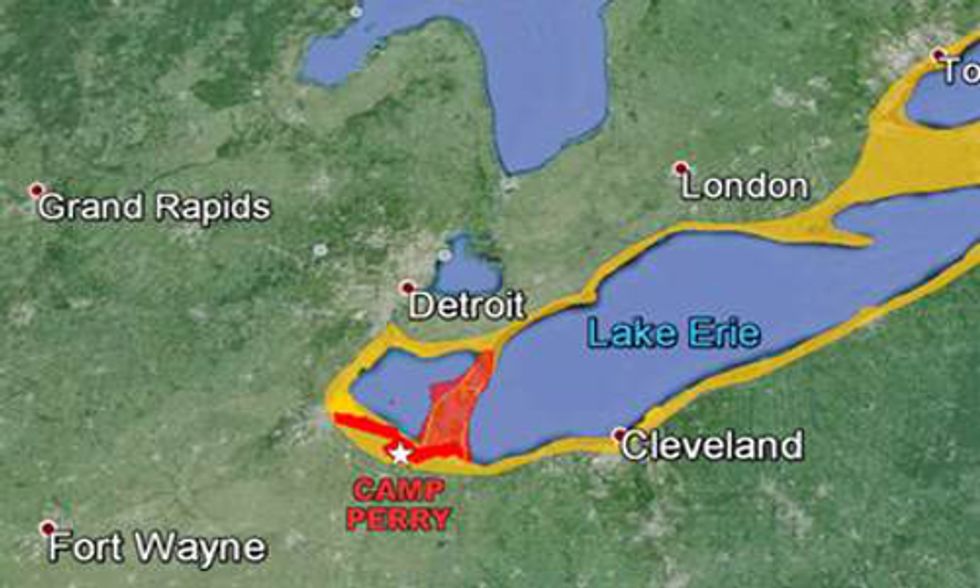 The Ohio National Guard facility at Camp Perry, near Port Clinton in northern Ohio, is the focus of possible legal action by American Bird Conservancy (ABC), a leading national bird conservation organization, and Ohio’s Black Swamp Bird Observatory (BSBO), which yesterday announced the intention to sue the Ohio National Guard in connection with violations of the federal Endangered Species Act and other federal laws concerning the planned installation of a wind turbine on the shores of Lake Erie.

Camp Perry, where wind development is currently in process, is in the "red zone" of ABC's Wind Development Bird Risk Map, indicating an extreme risk to birds. The red area that crosses Lake Erie is a high-density migration corridor.

The two groups announced their intention to sue via a letter sent by the Washington, D.C.-based public interest law firm of Meyer Glitzenstein & Crystal (MGC), stating that the environmental review process was unlawfully circumvented, and that the development is taking place in violation of the Endangered Species Act, the Migratory Bird Treaty Act, the Bald and Golden Eagle Protection Act and the National Environmental Policy Act.

“The proposed development of wind power at Camp Perry ignores the many concerns expressed by wildlife professionals in the U.S. Fish and Wildlife Service (FWS) and the Ohio Department of Natural Resources (ODNR),” said Dr. Michael Hutchins, national coordinator of ABC’s Bird Smart Wind Energy Campaign. “If completed, this turbine would sit in the middle of a major bird migration corridor directly adjacent to a national wildlife refuge. The FWS has concluded it is likely to kill threatened and endangered bird species such as the Piping Plover and Kirtland’s Warbler, as well as other federally protected birds. We are asking the developer to immediately halt construction and take the steps mandated by federal law to prevent the illegal killing of protected species.”

ABC and BSBO consider the placement of the Camp Perry facility to present an extremely high risk to migrating songbirds, especially the federally endangered Kirtland’s Warbler. This imperiled species was nearly extinct less than 40 years ago and, while rebounding due to costly and intensive management efforts, still numbers only in the low thousands. Additional birds at risk include other migrating songbirds, raptors, Bald Eagles and waterfowl.

According to Mark Shieldcastle, BSBO research director: “Long-term research indicates that some of the largest concentrations of migratory birds in North America occur in the Lake Erie coastal region, including Camp Perry. These species, along with one of the highest concentrations of nesting Bald Eagles in the lower 48 states, use the habitat precisely in the risk zone of turbines such as the one proposed. Long-term monitoring of the active eagle nest at the facility indicates extensive use of the area of the turbine by eagles.” Shieldcastle bases his statement on more than three decades of migratory bird research in the area, including as project leader for both wetland wildlife research and Bald Eagle recovery programs for the Ohio Division of Wildlife.

“The developers have misled the public about these federal and state concerns,” said Kimberly Kaufman, director of the BSBO. “This project is the vanguard of a major planned build-out of wind power in what is one of the nation’s greatest songbird migration bottlenecks and a key site for birding and bird tourism. It potentially sets a horrific precedent.”

ABC has created a Wind Development Bird Risk Map that shows the Lake Erie shoreline in Ohio is among the worst possible locations for a wind power project. The configuration of water and land serves to “funnel” large numbers of protected migratory birds through a small area; the birds aim to avoid a long lake crossing by hugging the shoreline or following the shortest cross-water route to the Pelee Peninsula to the north. This is also major stopover habitat, where migrating birds are not merely flying over, but landing and taking off—often during poor weather conditions.

According to Kenn Kaufman, internationally acclaimed author of bird field guides and a local resident, “This funneling effect and stopover behavior can be predicted to put migrating birds precisely in the vicinity of the Camp Perry turbine and other wind energy sites proposed for the area.”

Those concerns have been echoed by FWS, which in a letter to Camp Perry cautioned that there is a high probability of bird mortality caused by turbine strikes from the project and called for a formal Endangered Species Act consultation. That request was ignored by Camp Perry officials. Further, the ODNR cited 23 significant areas of deficiency in the original Environmental Assessment. ODNR also specifically raised concerns about impacts to Kirtland’s Warbler and eagles.

“Unfortunately, the problems with this project suggest that the current voluntary federal guidelines aimed at minimizing impacts to migratory birds are flawed. If we cannot even trust the government’s own agencies to follow them, then it is time for a change to a mandatory permitting system,” noted Dr. Hutchins.

Also of concern to local residents and the birding community is the fact that the area hosts one of the largest birding events in the U.S., helping to attract tens of thousands of people annually and injecting $37 million into the local economy.