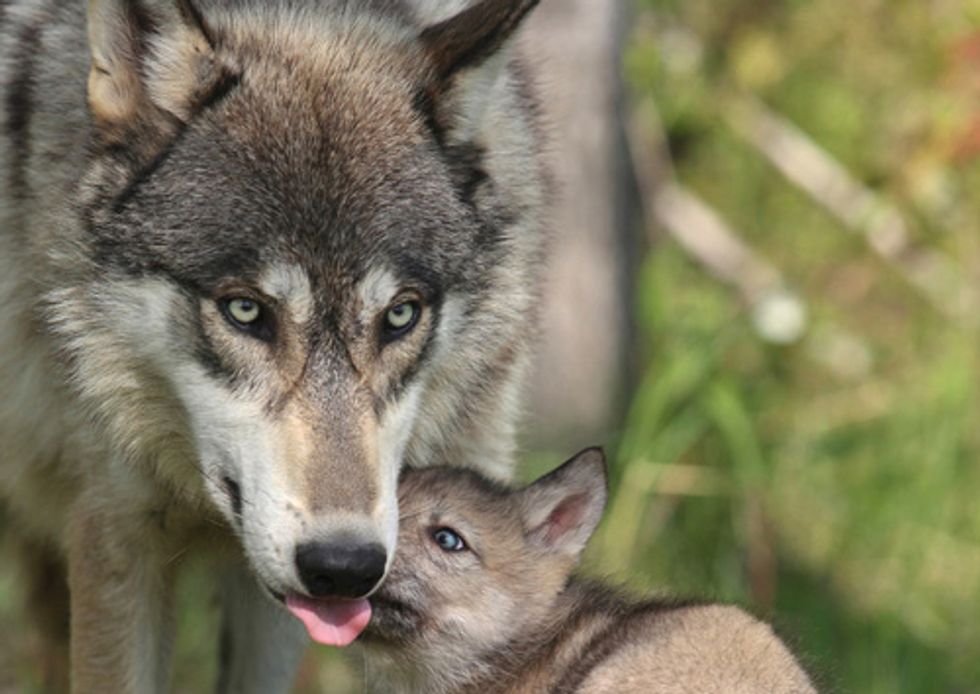 Conservation groups, represented by Earthjustice, served notice that they will file a court challenge to the federal government’s removal of Endangered Species Act protections for Wyoming wolves.

Conservation groups, represented by Earthjustice, served notice that they will file a court challenge to the federal government’s removal of Endangered Species Act (ESA) protections for Wyoming wolves. Earthjustice is representing Defenders of Wildlife, Center for Biological Diversity, Natural Resources Defense Council and Sierra Club in this action.

Yesterday’s announcement by the conservation groups comes on the heels of the U.S. Fish and Wildlife Service’s decision to turn wolf management in Wyoming over to state officials, despite the fact that Wyoming’s wolf management policies open the door to unlimited wolf killing throughout most of the state and provide inadequate protection for wolves even where killing is regulated. The Fish and Wildlife Service publicly announced the ESA delisting of wolves in Wyoming on Aug. 31, but the agency’s delisting rule was not officially published in the Federal Register until yesterday morning.

"Wyoming's wolf management plan is poor policy, weak in its protection of wolves and is based on flimsy science," said Franz Camenzind, a retired Ph.D. wildlife biologist who lives in the Jackson Hole area. "Wyoming's plan sets a very disturbing precedent for other states by abdicating management responsibility of a native wildlife species over nearly 90 percent of the state."

The conservation groups who plan to challenge the federal government’s abandonment of wolf protection in Wyoming offered the following statements on yesterday’s action:

“Wyoming’s anti‐wolf policies take the state backward, to the days when wolf massacres nearly wiped out wolves in the lower‐48 states. Our nation rejected such predator extermination efforts when we adopted the Endangered Species Act,” said Earthjustice attorney Jenny Harbine. “The U.S. Fish and Wildlife Service has turned its back on Wyoming wolves, but we intend to ask the federal courts to make sure that wolves on the border of Yellowstone—our nation’s first national park—have the protections they need to thrive.”

“We will not stand by while the Obama administration allows Wyoming to eradicate wolves through an extreme shoot‐on‐sight predator policy across most of the state,” said Mike Senatore, vice president of conservation law for Defenders of Wildlife. “It’s extremely disheartening to watch the Obama administration unravel one of our country’s great Endangered Species Act success stories by turning over the conservation of wolves to states such as Wyoming and Idaho that treat these animals like unwanted vermin.”

“Removal of Endangered Species Act protections for Wyoming’s wolves is a disaster for the state’s wolf population and for recovery of wolves to Colorado and other parts of the west,” said Noah Greenwald, endangered species director with the Center for Biological Diversity. “Like past versions of Wyoming’s wolf plan that were rejected by the Fish and Wildlife Service, the current plan fails to ensure the long-term survival and recovery of the state’s gray wolves. [Yesterday’s] decision to remove protections for Wyoming’s wolves fails to rely on best science and represents the worst kind of political intrusion by Secretary Salazar into management of an endangered species.”

“This plan allows Wyoming to manage wolves at the razor’s edge of an already low number of wolves,” said Sylvia Fallon, senior scientist at the Natural Resources Defense Council. “It fails to adequately regulate the kill‐on‐sight practices that drove wolves to endangerment in the first place. And it stands as yet another lost opportunity on the part of Fish and Wildlife Service to provide the leadership necessary to secure a legally and scientifically defensible delisting plan for wolves.”

“Wyoming’s plan is a wolf killing plan, not a management plan. It is essentially the same plan that has been rejected before because of the devastating impacts it would have on wolves in Wyoming and throughout the Northern Rockies. Allowing it to move forward now for political reasons could reverse one of the greatest endangered species recovery success stories of all time,” said Bonnie Rice of the Sierra Club’s Greater Yellowstone Resilient Habitats Campaign. “We need a return to the sound, science-based management practices that have for decades brought iconic animals back from the brink of extinction.

Last year, Congress gave hunters and trappers in Montana and Idaho the right to kill wolves that had been protected under the ESA, nullifying a court victory won by Earthjustice that would have prevented the hunts. Since then, management of wolves in the two states has grown increasingly hostile as the states have expanded their wolf quotas and hunting seasons. In the 2011‐2012 hunting season, hunters and trappers killed 545 wolves in Idaho and Montana. The two states have designed wolf hunting regulations for the 2012‐2013 season that will result in even greater wolf killing.

Even while approving state management in Montana and Idaho, the U.S. Fish and Wildlife Service in the past denied this authority to Wyoming due to its extreme anti‐wolf laws. Since then, Wyoming’s wolf management laws have only slightly changed, reducing the area where year‐long, unregulated wolf killing is permitted from 90 percent of the state to about 85 percent of the state. Wyoming retains unrestricted wolf killing even in that five percent of the state for much of the year. The conservation groups contend that Wyoming law remains inadequate to protect wolves.

Yesterday’s legal notice from the conservation groups follows years of legal work by Earthjustice attorneys to protect wolves in the Northern Rockies until their population could sufficiently recover from near extinction and state laws were in place to safeguard their recovery.

After being exterminated in the last century from the western U.S., including Wyoming, wolves have made a comeback in the Northern Rockies, which has helped reestablish ecological balance and boost the regional economy. Yet Wyoming’s wolf population, estimated at 328, is small relative to its neighbors in Idaho and Montana.

Wyoming law allows unlimited wolf killing in the vast majority of the state, including aerial gunning of wolves and even killing wolf pups in their dens. Even in the limited areas of the state where wolf killing is supposed to be regulated under Wyoming law, some people have discussed baiting wolves into conflict with domestic animals to justify reducing wolf numbers.