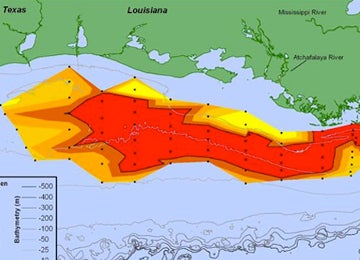 Imagine if all of the animals throughout the entire state of Connecticut left or died. This is what happens every year in the Gulf of Mexico. The size of the dead zone varies—sometimes it’s as big as New Jersey or only the size of Rhode Island, but the problem always persists. 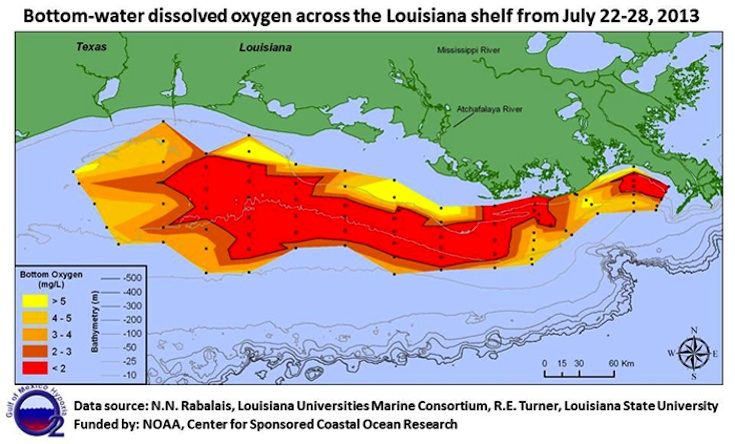 Researchers from the Louisiana Universities Marine Consortium just spent a week measuring dissolved oxygen concentrations off the coasts of Louisiana and Texas to determine how big the dead zone is this year. And they found that it is about 5,800 square miles, or roughly, the size of the state of Connecticut.

This area is called “the dead zone” because dissolved oxygen levels are too low to support life. Animals that can move out of the area, like fish and shrimp, will leave, and animals that can’t, like brittle stars and mussels, will become stressed and eventually die.

The dead zone forms every summer because nutrient-rich water from the Mississippi River basin flows into the Gulf and causes algal blooms. Nutrients, like nitrogen and phosphorus, are helpful when used to fertilize gardens and crops, but like most other things, the best rule for nutrients is moderation. While these nutrients are naturally occurring in the Gulf and all ecosystems, levels that are too high can cause problems. 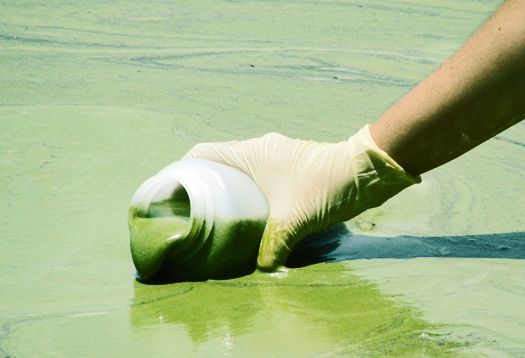 The Mississippi River basin drains 41 percent of the contiguous U.S. and as water runs off fields, yards and pavement, it collects nutrients. These nutrients are carried to the Gulf where they “fertilize” coastal waters and cause algal blooms. As algae die, they sink to the seafloor where they are decomposed by bacteria, a process that uses oxygen.

During most times of the year, bottom waters and surface waters mix frequently, so oxygen levels are replenished regularly. However, during the summer there is an abundance of warm fresh water in the Gulf due to seasonal warming and freshwater river outflows. This water is less dense than the cold salty water near the bottom of the seafloor.

The densities are different enough that the two layers of water will become separated (think oil and water) and prevent mixing of the oxygen-poor bottom waters with the oxygen-rich surface waters. This is called stratification. When stratification occurs, low-oxygen waters are trapped at the bottom, and as more algae are decomposed, the oxygen levels continue to drop until they get low enough to cause a dead zone.

While the dead zone off the coast of Louisiana is the largest and most recognized example of coastal hypoxia in the Gulf, this problem is a Gulf-wide issue. The Ocean Conservancy has mapped the documented cases of low-oxygen areas in the extensive report, Gulf of Mexico: A Marine and Coastal Atlas.

What is the best way to reduce the size of the dead zone? Reduce the amount of nutrients that reach the Gulf.

The two best ways to do this are: 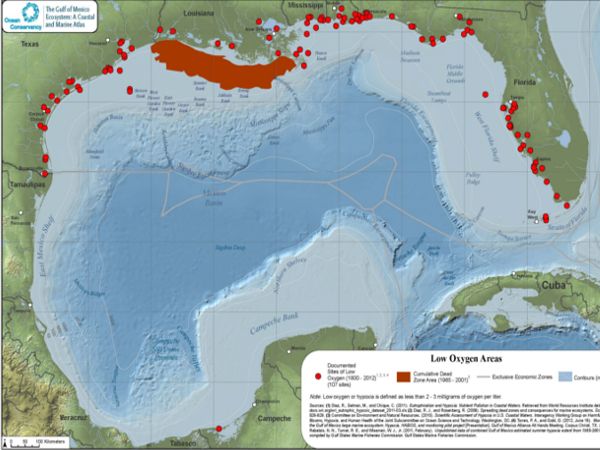 As consumers of agricultural goods, we can contribute to reducing nutrients by supporting farming practices that promote sustainable, responsible agriculture. For example, one practice called crop rotation can reduce fertilizer application by rotating plants like legumes that add nitrogen to the soil with plants like corn that take it up. And the practice of adding stream buffers to drainage ditches can capture nutrients before they enter waterways.

In our own yards, the best way to reduce excess nutrients is to use fertilizers carefully and slow storm water runoff by using techniques such as rain gardens.