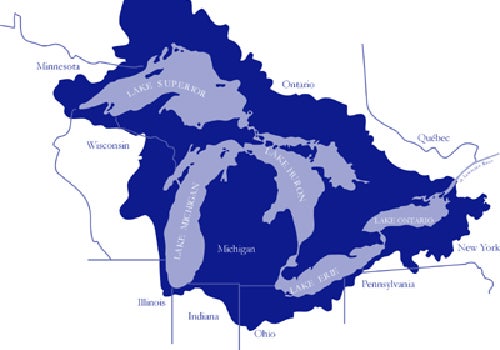 The Healing Our Waters-Great Lakes Coalition on June 20 announced its opposition to a U.S. House of Representatives funding bill that cuts Great Lakes programs that clean up toxic pollution, prevent sewage contamination and protect drinking water for more than 30 million people. The bill—the Fiscal Year 2013 Interior and Environment Appropriations Bill—was marked up by the House Subcommittee on the Interior, Environment and Related Agencies.

“This budget cuts programs that millions of people depend on every day for clean drinking water, jobs and way of life,” said Chad Lord, policy director of the Healing Our Waters-Great Lakes Coalition. “Restoration programs are producing results for people and communities—but there is more work to do. We’re counting on the Great Lakes Congressional delegation—which has long championed these important programs—to pass a budget that maintains restoration funding. Cutting funding will only make the problems worse and more costly to solve.”

The House budget bill slashes $50 million from the Great Lakes Restoration Initiative, a program which helps communities clean up toxic pollution, restore habitat, reduce runoff from farms and cities and control invasive species. The bill funds the program at $250 million for fiscal year 2013, a reduction of more than 16 percent from the fiscal year 2012 funding level of $300 million—and is almost half of the $475 million allocated in fiscal year 2010.

The bill also guts the Clean Water State Revolving Loan Fund, which helps communities across the nation fix sewers to prevent sewage overflows that contribute to beach closures. The bill includes $689 million for the program for fiscal year 2013, a reduction of $780 million (54 percent) from fiscal year 2012 funding levels of $1.4 billion.

The cuts heavily impact the Great Lakes states of Illinois, Indiana, Michigan, Minnesota, New York, Ohio, Pennsylvania and Wisconsin, which collectively stand to lose more than $285 million in federal Clean Water State Revolving Loan funds. “These cuts will slow efforts to restore the Great Lakes and protect the health of people in communities across the region,” said Lord. “We can do better—and need to do better to protect our environment and economy.”

In recent years, restoration programs have proven to be a shot in the arm to communities across the region, which are cleaning up toxic pollution to bolster property values and encourage business development; restoring wetlands and habitat to support the region’s outdoor recreation economy; and controlling invasive species to protect a recreational and commercial fishery valued at more than $7 billion. Read about successful projects here.

Despite the progress, there are signs that the Great Lakes still need help: Algae blooms are returning in Lake Erie, hurting tourism, small businesses and fishing, fish consumption advisories and beach closures persist, and new threats like the Asian carp are threatening to undermine the health of the Lakes.

The public wants the nation to continue its investment in Great Lakes programs. Polling conducted in May on behalf of the Healing Our Waters-Great Lakes Coalition shows that 72 percent of Ohio voters support continued funding for restoration programs—including 63 percent of Republicans, 72 percent of Independents and 79 percent of Democrats. Further, a majority of Ohio voters (54 percent) reject the idea that restoration programs should take a cut like other programs.

“People across the political spectrum care about the Great Lakes,” said Lord. “People understand how important the Lakes are to us culturally and economically.”

The Great Lakes supply more than 30 million people with drinking water and are the foundation of the region’s economy. More than 1.5 million jobs are directly connected to the Great Lakes, generating more than $62 billion in wages annually. Restoration programs, according to the Brookings Institution, provide $2 in benefit for every $1 investment. Recent studies suggest that Great Lakes restoration programs can provide as much as a 6-to-1 return on investment.

“For Republicans and Democrats looking to make prudent choices with taxpayer dollars,” said Lord, “Great Lakes restoration is one of the best investments on the dollar in the federal budget.  Let’s create some jobs by investing in these magnificent bodies of water.”

The Healing Our Waters-Great Lakes Coalition consists of more than 120 environmental, conservation, outdoor recreation organizations, zoos, aquariums and museums representing millions of people, whose common goal is to restore and protect the Great Lakes.