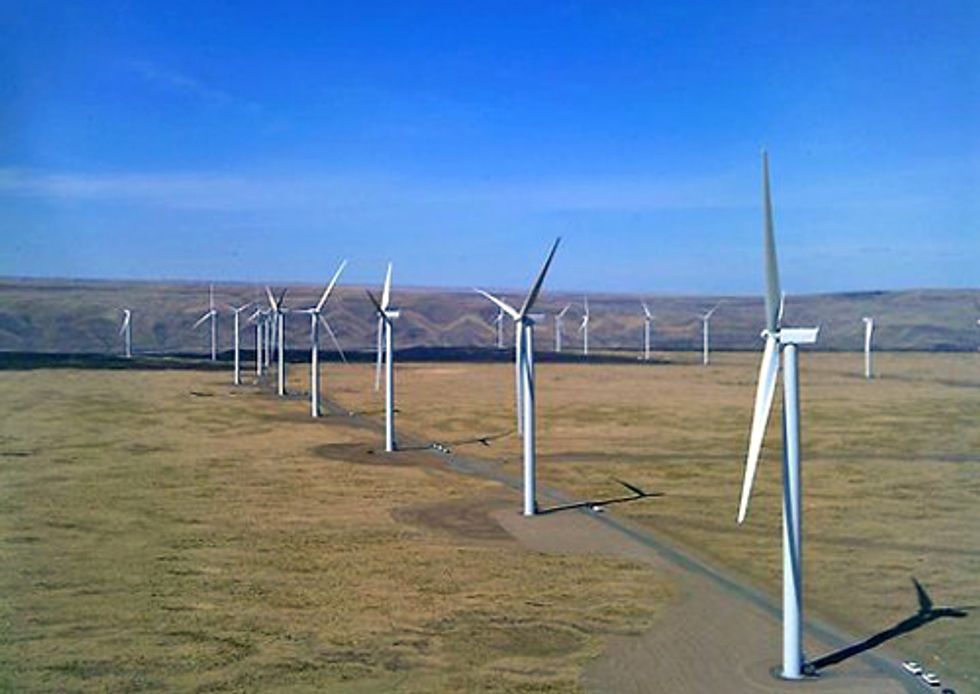 Did you notice that last weekend the largest onshore wind farm in America started operation in north-central Oregon? The 845 MW Shepherds Flat facility will generate an estimated 2 billion kWh each year—enough to power 235,000 homes. On top of that, this clean power will eliminate about 1.5 million metric tons of carbon pollution annually—the equivalent of taking approximately 260,000 cars off the road.

Who built Shepherds Flat? We, the people, did! Caithness Energy relied on more than a billion dollars in loans guaranteed by the Energy Department. With the project up and running, and with a long-term commitment from Southern California Edison to buy power, it looks like a good investment. Maybe that's why Google also kicked in $100 million.

Shepherds Flat is the kind of project we should be building across the U.S.—or at least in those parts, like the Eastern Columbia River Gorge, with abundant wind resources. Yet the Republican Party opposes even extending the Production Tax Credit that wind power has had for decades. Right now, they would probably sooner move Burning Man to the National Mall than help finance more success stories like Shepherds Flat.

Remember red states and blue states? It turns out that it's the red ones that have the most to gain by investing in renewable energy. For one thing, many of them are rich in renewable resources—olar in the Southwest and wind in the Midwest. This isn't just hypothetical. According to a new report from DBL Investors, of the 10 states with the fastest growth in clean-tech jobs, only two (Hawaii and New York) are considered traditionally Democratic.

In fact, when you look at the total number of clean-tech jobs per state, rock-red Texas comes in third. That's because both Governor Rick Perry and his predecessor, George W. Bush (not exactly card-carrying enviros) pushed for wind energy incentives in their state. And it worked. In 2010, Texas got eight percent of its energy from wind.

Governors Bush and Perry are not the only Republicans who've refused to pretend that renewable energy isn't good for their states' economies. Particularly in the Midwest, Republican leaders like Kansas Governor Sam Brownback are up in arms about their party's opposition to wind energy—not to mention the thousands of jobs at stake if the Production Tax Credit expires.

So why has the national GOP adopted its topsy-turvy worldview? For the answer, you have to look toward a different kind of green—the unprecedented hundreds of millions of dollars that Big Oil and Big Coal are spending to make sure that everyone in America knows the name of Solyndra (even if they aren't sure exactly what happened there) but as few as possible hear about successes like Shepherds Flat.

In the long run, of course, the dirty energy advocates will fail because they're swimming (as hard as they can) against the tide of history. But we can't afford to wait for reason to triumph over ad dollars. What can you do right now? Tell Congress to renew the Production Tax Credit before we lose even more wind-energy jobs.