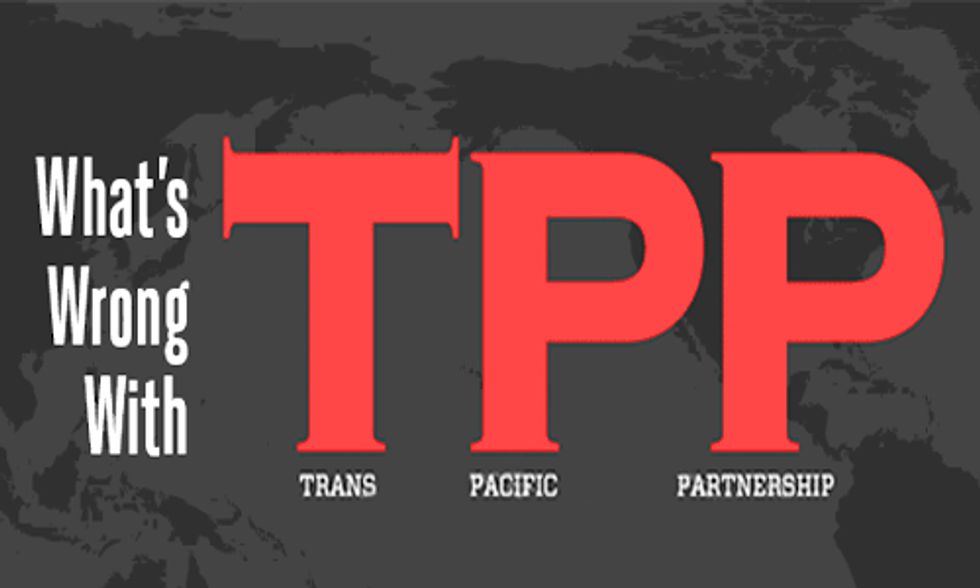 Yesterday, Congress pulled a rusty, old tool from the bottom of its toolbox. Senate Finance Committee Chairman Max Baucus (D-MT) and Rep. Camp (R-MI) introduced the Bipartisan Congressional Trade Priorities Act of 2014, otherwise known as "fast track," which could facilitate passage of deeply flawed trade agreements such as the Trans-Pacific Partnership (TPP) trade pact with limited public and Congressional input. If fast-track legislation is approved by Congress, the President would be able sign the TPP and then send it to Congress for a straight up-or-down vote—with no room for amendments and limited floor debate. If that sounds backward, it's because it is.

The TPP agreement could devastate communities, our climate and our environment. It would open the floodgates for the expansion of natural gas exports and fracking across the U.S. Graphic courtesy of the Electronic Frontier Foundation

First, fast track is an outdated and inappropriate mechanism. It was first passed in 1974 when trade pacts focused on traditional trade issues, like tariffs and quotas. Today, trade pacts like the TPP cover a broad range of issues including the environment, investment, labor, government procurement, consumer protections and many more things we face in our everyday lives. It is therefore critical that Congress maintain its constitutional authority to oversee trade policy and ensure that trade pacts protect communities, workers and the environment before the pacts get finalized.

Second, fast track is undemocratic. After congressional approval, the President could submit signed trade pacts to Congress for an up-or-down vote within 90 days with all amendments forbidden and a maximum of 20 hours of debate. Even more atrocious is that it would actually allow the President to write legislation that would change U.S. laws to make them conform to the terms of the secretly negotiated trade agreement.

In other words, fast-track authority eliminates a critical constitutional check-and-balance structure that aids most other democratic processes. By stripping Congress of its ability to fully debate and amend the language of today's all-encompassing trade pacts, fast-track authority renders Congress unable to ensure that trade negotiations result in agreements that benefit communities and the environment.

Third, it's a risky endeavor that could help rubberstamp very harmful trade pacts such as the TPP. The TPP agreement could devastate communities, our climate and our environment. It would elevate corporations to the level of nations, thus allowing foreign companies to directly sue governments in private trade tribunals over laws and policies that corporations allege reduce their profits. It would also open the floodgates for the expansion of natural gas exports and, therefore, fracking across the U.S.

And the real kicker is that—despite these any many other consequences—there has been virtually no opportunity for public discussion of the trade pact, as no draft text has been publicly revealed. So Congress is actually voting on whether to quickly pass trade agreements it's never even seen!

Now is the time we need a full discussion about the true costs of the TPP and other trade pacts—not a process to rush flawed deals through the finish line.

The bottom line is that fast track would set us up for failure. It's critical that Congress has the ability to effectively oversee trade negotiations and ensure that the contents of our trade agreements protect our workers, communities and environment in the U.S. and abroad. The public and members of Congress have effectively been left in the dark for too long. Now it's up to Congress to take the reins and oppose fast track. On behalf of the Sierra Club and our 2.1 million members and supports, I urge members to oppose this fast-track bill and retain their right to ensure that the U.S. trades responsibly.