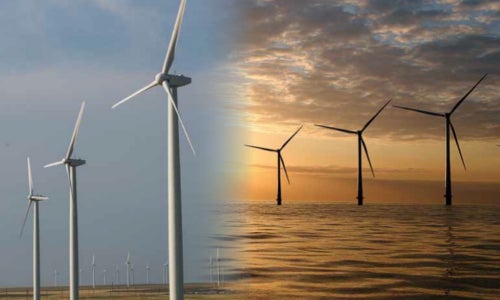 As Environment America prepared to unveil its report More Wind, Less Warming: How American Wind Energy’s Rapid Growth Can Help Solve Global Warming at a press conference today, the U.S. House of Representatives showed that it continues to resist a clean energy future.

Wednesday evening the House passed H.R. 5771, which extended clean energy credits only until the end of 2014. Today senators Ed Markey of Massachusetts and Tom Udall of New Mexico joined Tom Kiernan, CEO of the American Wind Energy Association, and Anna Aurilio of Environment America at the Senate Visitors Center to talk about the report and the carbon reduction benefits of encouraging the growth of wind power through renewable energy tax credits and urge Congress to extend the credits through 2015. 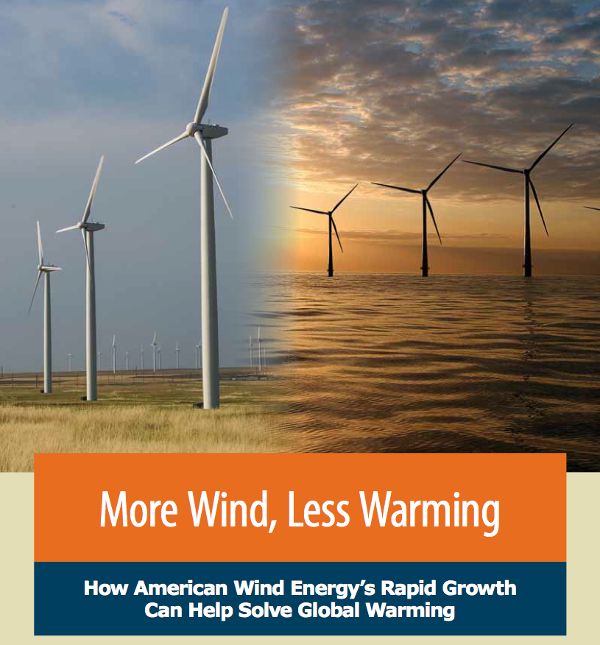 Wind could be the key to a clean energy future in the U.S. if Congress doesn’t block it. Image credit: Environment America

“The House just delivered a blow to wind power by adopting a meaningless three-week extension of clean energy tax credits,” said Aurilio. “Now it’s up to the Senate to push for a two-year renewal of these incentives, so that Americans can reap the benefits of and cleaner air. Speeding the development of pollution-free wind energy will slow global warming. But Congress needs to invest now in healthy air and a healthy planet.”

“Congress needs to provide stability so that American workers can make more of our own energy here at home and reduce carbon pollution as rapidly and cheaply as possible,” added Kiernan. “We need to get out of short-term thinking, including three-week extensions of the policy that is critical to building more wind energy, the Production Tax Credit. That’s why we are urging the Senate today to stand up for renewable energy, vote for the EXPIRE Act and extend the PTC at least through 2015, before considering a phase-out that would provide a glide path for the industry to keep scaling up.”

At the press conference, Udall urged his colleagues to do the right thing, citing the impacts he sees in his home state.

“New Mexico is at the eye of the storm when it comes to the impacts of climate change,” he said. “But while global warming is a threat we must fight, it’s also a tremendous opportunity to invest in clean energy jobs of the future. Wind has huge potential—not only is it carbon free, it’s abundant in New Mexico and it uses almost no water. Now is the time for Congress to make a commitment to fight climate change and help create jobs of the future by extending the wind production tax credit—not just for one year but long enough for this important industry to meet its full potential.”

More Wind, Less Warming points to the dramatic increase in wind-generated power in the U.S. and says that by 2030, the country could be generating 30 percent of its electricity from wind while cutting power plant pollution by 40 percent over 2005 levels in the same time period. That exceeds the 20 percent that a recent Greenpeace/Global Wind Energy Council report projected wind could be providing of the world’s power by that same deadline.

“The U.S. generates 24 times more electricity from wind power than we did in 2001, providing clean, fossil fuel-free energy that helps the nation do its part in the fight against global warming,” it says. “In 2013 alone, wind power averted 132 million metric tons of carbon dioxide emissions—as much as would be produced by 34 typical coal-fired power plants,” adding, “But with the United States and the world needing to move toward a future of 100 percent clean energy in order to prevent the worst impacts of global warming, America must do much more.”

Currently, wind generates about 4 percent of electrical power in the U.S. But the report points to nine states—Iowa, South Dakota, Kansas, Idaho, Minnesota, North Dakota, Oklahoma, Colorado and Oregon—that currently produce more than 12 percent of their electricity with wind, and two states—Iowa and South Dakota—in which wind already provides more than a quarter of their power.

There is enough potential wind energy to power the U.S. ten times over, the report says, but tapping offshore wind power will be key to reaching this goal. It cites the success of operational wind farms in Europe as an indicator of what this could mean for the U.S. in terms of producing clean energy. 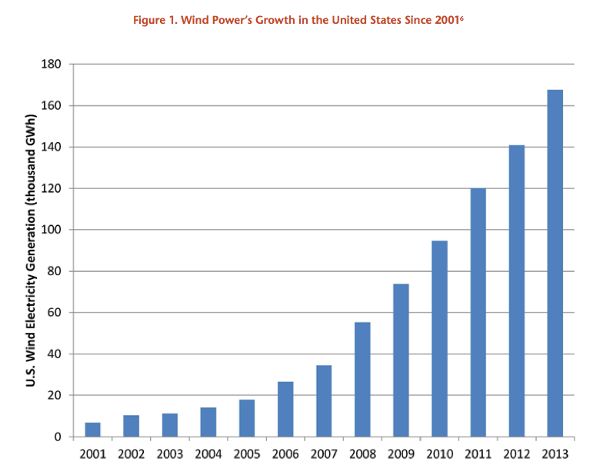 Wind energy has grown dramatically in the last decade, thanks to clean energy standards and policies. Image credit: Environment America

But, it says, “America is unlikely to achieve a 30 percent wind energy goal without strong policy action. Much of the nation’s recent growth in wind energy has been driven by policies such as state renewable electricity standards. Continuing and expanding those policies will be necessary to keep wind energy growing quickly.”

To get there, it urges the federal government to adopt the U.S. Environmental Agency (EPA) Clean Power Plan, proposed by President Obama in June, to reduce greenhouse gases produced by power plants 30 percent by 2030, to join with state governments in setting ambitious goals for the expansion of wind power, to expedite development of offshore wind with responsible environmental protections, and to renew and extend the Production Tax Credit and Investment Tax Credit to continue to drive the development of wind power and launch a U.S. offshore wind industry.

“When we support clean energy development, we’re promoting job creation that will help all of creation,” said Markey. “That’s because good clean energy policy is good climate policy and helps us be the leader in developing the technologies that power our economy and protect our environment. America’s wind energy industry is the future of our economy, and we need to invest in the fuels of the future, not the industries of the past.”