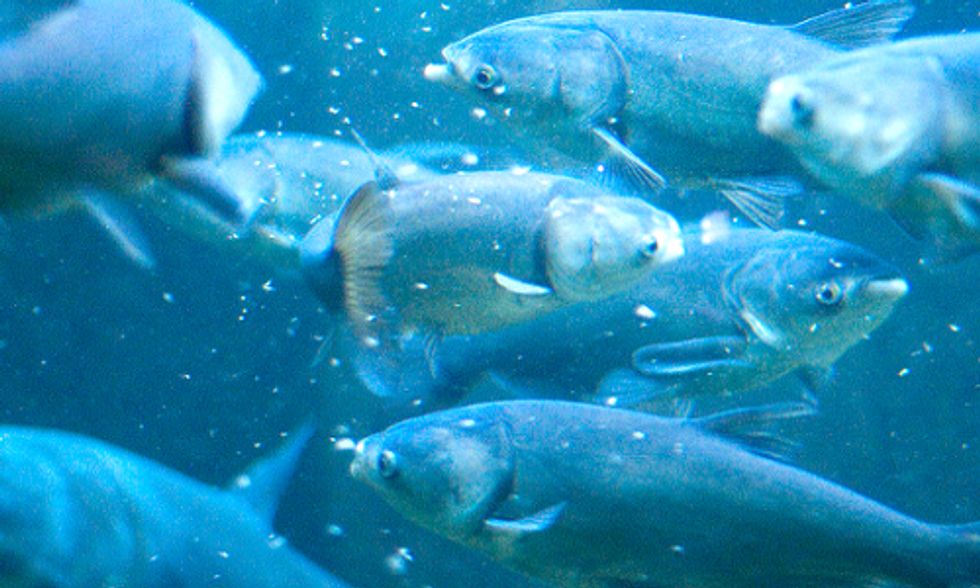 The U.S. Army Corps of Engineers has identified physically separating the Mississippi River and Great Lakes watersheds as the most effective way to prevent aquatic invasive species like Asian carp from moving between the two iconic waters.

Conservation groups today responded to a congressionally mandated study released Monday that outlines eight ways to prevent the transfer of invasive organisms between the two water bodies via Chicago-area canals built more than 100 years ago to connect the two systems. Of all the options studied, the groups agreed that only one—physical separation—is effective at stopping the transfer of the various invasive fish, parasites, grasses, algae and other organisms.

Scientists agree that the entry of the bighead and silver carp into the Great Lakes could upend the lakes’ ecology and the region’s $7 billion fishing industry.

"The U.S. Army Corps of Engineers study leaves no doubt that the most effective way to stop invasive species from wreaking environmental and economic harm on the Great Lakes and Mississippi River communities is through the construction of a physical barrier," said Joel Brammeier, president and CEO of the Alliance for the Great Lakes. "This paves the way for Congress and our region to move from study to action on a permanent solution that will protect the environment, jobs and way of life for millions of people."

The report comes soon after the Army Corps admitted in a report that a series of electrical barriers designed to repel the advancing Asian carp can be breached in a variety of ways, leaving Lake Michigan and the other Great Lakes vulnerable to the destructive non-native fish.

“All evidence points to one conclusion: physical separation is the only defensible solution to the epidemic of invasive species which pose a threat to people, wildlife and our economy,” said Robert Hirschfeld, water policy specialist, Prairie Rivers Network. “It’s time to get away from Band-Aid approaches and toward a long-term, comprehensive and permanent solution. This report can help us do that.”

The Army Corps findings mesh with overwhelming public support for physically separating the two systems. The public has clamored for a long-term solution to the Asian carp crisis ever since environmental DNA of the fish was discovered past the electric fence in 2009.

“More than 25,000 people, many organizations and nearly 90 communities in the Great Lakes region concerned about an Asian carp invasion have communicated to decision makers how we want the Great Lakes separated from the Mississippi River,” states Cheryl Kallio, associate director for Freshwater Future. “We are pleased to learn the Army Corps' report identifies how this can be done and confirms that separation is the most protective option."

The Army Corps study pegs the cost of separating the Great Lakes and Mississippi River systems in the billions, a cost that is in-line with large-scale city infrastructure projects in cities across the region. Building a physical barrier would also mean restoring and revitalizing part of the Chicago River and the area’s drinking water and wastewater systems. It would also help address flooding.

“This is not a Chicago problem, an Illinois problem, or a regional problem. It is a national issue, that will require appropriate resources for a solution,” said Henry Henderson, Natural Resources Defense Council Midwest director. “But the scale of the response creates a tremendous opportunity to revitalize Chicago’s failing waterways while taking essential action to protect the Great Lakes. Those don’t come often, as evidenced by the sorry state of both the river systems and the lake. This is a chance to do better.”

With the release of the study, the region’s focus now turns to putting words into action—while there’s still time to act.

“The report provides a roadmap for elected officials to move forward to protect the Great Lakes and Mississippi River communities,” said Marc Smith, senior policy manager with the National Wildlife Federation. “We look forward to working with Congress to take the next steps to implement the permanent long-term solution. The cost of inaction will be devastating to our environment, economy and quality of life.”

Ordered by Congress in 2007, the Great Lakes-Mississippi River Interbasin Study comes two years after an independent analysis by the Great Lakes Commission and Great Lakes and St. Lawrence Cities Initiative found separating the two iconic waters was both feasible and affordable.

"We are pleased the corps has concluded that restoring the historic divide between Lake Michigan and the Illinois-Mississippi River is the most effective option for halting aquatic invaders," said Jack Darin, director of the Sierra Club, Illinois Chapter. "We know this can't be done overnight, but now Illinois leaders can begin designing separation solutions that pay huge dividends for the Chicago region—modernized freight transportation, a much cleaner Chicago River, and new solutions to flooding problems that have plagued neighborhoods for decades."

"This will not only keep Asian Carp and other aquatic invaders out of Lake Michigan, but also protect the Illinois and Mississippi Rivers from other alien species that can currently enter them from the Great Lakes," Darin said.

Scientists agree that the entry of the bighead and silver carp into the Great Lakes could upend the lakes’ ecology and the region’s $7 billion fishing industry. The Chicago Waterways System, which feeds into Lake Michigan, has been identified as the most likely route for the carp to enter the Great Lakes.

"It’s now time to act," said Ambs. "Delay will only make the problem more complicated and expensive to solve.”