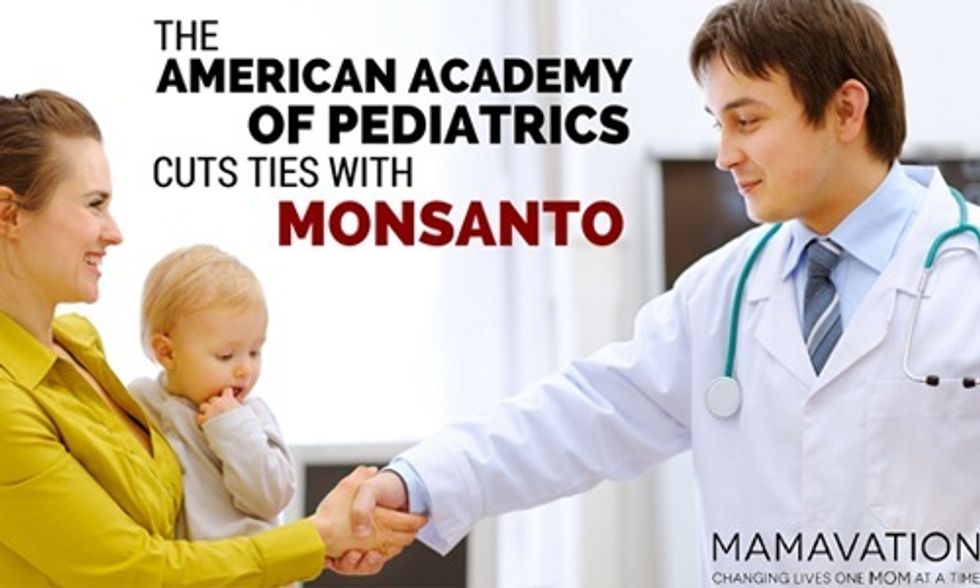 EcoWatch can exclusively confirm that the American Academy of Pediatrics (AAP) has ended its corporate partnership with Monsanto following the efforts of a group with surprising clout: Mom bloggers.

It appears that the severing between the divisive biotech company and the pediatricians association was spearheaded by Mamavation founder and "food activist" Leah Segedie, who confronted the AAP's public affairs team after learning about this "unholy alliance," according to a Mamavation blog post which first announced news of the split.

"I reached out to the AAP behind the scenes to discuss the negative impacts a company like Monsanto could have on their image," Segedie told EcoWatch via email. "It was a very logical decision for them. I think it may have felt like breaking up with a bad boyfriend that never calls."

A few months after Segedie first made contact, the AAP's public affairs team informed her that the organizations had decided to cut ties.

EcoWatch contacted the AAP and confirmed that the academy will not renew its corporate partnership with Monsanto. According to a source at the organization familiar with the decision, the AAP regularly reviews its partnerships to make sure these companies have values that "align with what the Academy believes is in the best interest of children’s health."

However one might feel about Monsanto's products and its practices, the company has certainly been facing a spate of terrible press. Six months ago, the World Health Organization's cancer arm famously listed glyphosate, the toxic main ingredient in its flagship herbicide Roundup, as a possible carcinogen (Monsanto says it's safe and demands a retraction); it was found guilty in the chemical poisoning of a French farmer (Monsanto plans to appeal); and now 19 countries of the Europe Union have decided to ban the company's GMO-crops out of public health and environmental concerns (Monsanto says it respects these decisions but claims these nations are ignoring science).

As for why Segedie feels Monsanto and the AAP should not be aligned, she explained, "I believe the trust of mothers is paramount to the AAP. Partnering with a company that makes poisons for a living isn't consistent with their mission, especially when that company is the maker of DDT, PCBs, Agent Orange, glyphosate and GMOs."

"They simply do not have a track record consistent with trust, especially when it comes to the most vulnerable part of our population—children," she continued. "I'm sure mothers in Anniston, Alabama would especially agree after the $700 million lawsuit settlement from poisoning their town. For that reason, I felt a partnership with Monsanto would be damaging to their reputation and may derail their efforts to build trust with mothers in an age of social transparency."

The source at the AAP explained to us that the decision to end ties with Monsanto, like with Coca-Cola, was part of an ongoing and regular review of the AAP's corporate partnerships. The source added that these decisions commonly happen on both sides of these types of agreements.

Furthermore, the source continued, the AAP's board of directors and CEO have listened carefully to their members and regularly assess their partnerships with funders to make sure the company's values align with what the Academy believes is in the best interest of children’s health.

Incidentally, the AAP recently ended its relationship with Coke following a New York Times report that revealed that the soda giant has given nearly $3 million to the Academy over the past six years, and paid for scientific research that played down the role of sugary drinks in obesity.

It's unknown what influence, if any at all, Monsanto had over the AAP, but the company does belong to the President's Circle—an exclusive group that also includes Pampers, Pfizer, Nestle and, yes, Coca-Cola—for donating at least $50,000 to the academy.

In reaction to the split, Segedie said that the AAP cutting ties with Monsanto was a wise move for the academy.

"Not only are they making a statement about the potential health impacts of glyphosate to children with this move, but they are demonstrating to moms this is a new era," she said. "From now on, I have a feeling they will be weighing each sponsorship differently to ensure the partnership is consistent with their values instead of just swapping cash for a marketing halo."