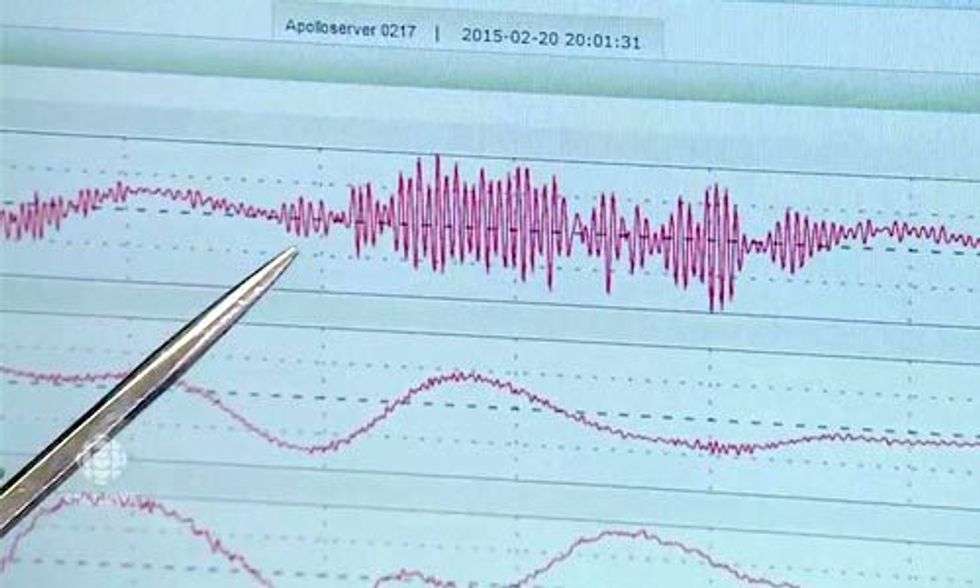 Fluid injection from hydraulic fracturing, or fracking, triggered a 4.6-magnitude earthquake that struck northeast British Columbia (BC) over the summer, the Canadian province's energy regulator has confirmed. It's the largest fracking-caused earthquake in the province to date, according to The Canadian Press.

Or, more significantly, it could very likely be the largest fracking-caused earthquake in the world.

"This seismic event was caused by hydraulic fracturing," Ken Paulson, CEO of the BC Oil and Gas Commission, said in a statement.

Fracking, which has helped drive U.S.' gas prices below $2 a gallon, involves shooting large quantities of water and chemicals at high pressure to release gas and oil from layers of subterranean shale.

The earthquake struck this past August about 110 kilometers northwest of Fort St. John in BC. Its epicenter was three kilometers from a fracking site operated by Progress Energy, prompting the natural gas production company to temporarily halt operations after the quake hit.

The company said in a statement that it's taking the incident very seriously and it has 17 monitoring stations in its operating area to accurately detect seismic activity.

Progress Energy also has the dubious honor of holding the previous record for the largest known fracking-caused quake in BC with a 4.4-magnitude tremor in 2014.

A couple of substantial earthequakes have been recorded in northern BC and Alberta. They are among the biggest in the world related to fracking. The quakes registered around 4.5 magnitube but caused no damage or injury. Photo credit: CBC

As CBC News noted, the 4.6 August quake may likely be the largest in the world caused by fracking. That's because after a 4.4 struck Alberta in Jan. 2015, scientists told the publication at the time it was already the world's largest quake caused by fracking.

Honn Kao, a research scientist with Geological Survey of Canada, told CBC News after the 4.6 hit, "If this is proven to be linked to hydraulic fracturing, this would be a world record in terms of size."

A study in Seismological Research Letters found that fracking was the likely culprit of hundreds of small tremors in Ohio during 2013; another Ohio-based study that came out in 2015 pinpointed fracking as the cause of a 3.0 magnitude earthquake near Poland Township. In 2011, fracking was associated with a 3.8 magnitude earthquake in British Columbia, Canada; and that same year, in Blackpool, England, two earthquakes were directly linked to fracking operations. Fracking has also been linked to an earthquake that was felt in Garvin County, Oklahoma in 2011.

Paulson said in his statement that fewer than one percent of fracking operations trigger seismic activity, and those quakes tend to be low magnitude and cause little damage.

Still, as Geological Survey of Canada seismologist John Cassidy told The Globe and Mail, "more and bigger" earthquakes triggered by gas extraction could be on the horizon.

A study from Dr. Cassidy and his colleagues found that northeast BC recorded 24 earthquakes in 2002-03 before fracking kicked off. In 2010-11, that number jumped to 189 earthquakes during the peak of fracking activity in the Horn River Basin.

This trend mirrors the alarming uptick of earthquakes striking Oklahoma. Before 2009, Oklahoma had two earthquakes of magnitude 3.0 or greater each year, but now there are two a day, giving it the distinction of the earthquake capital of the U.S., if not the world.

Although fracking isn't the direct cause of Oklahoma's earthquake swarm, it is related to the process. The scientific consensus is that the injection of large volumes of toxic wastewater left over from oil drilling and fracking operations into underground wells has triggered the state’s now daily earthquakes.