Confessions of a Pot Hunter 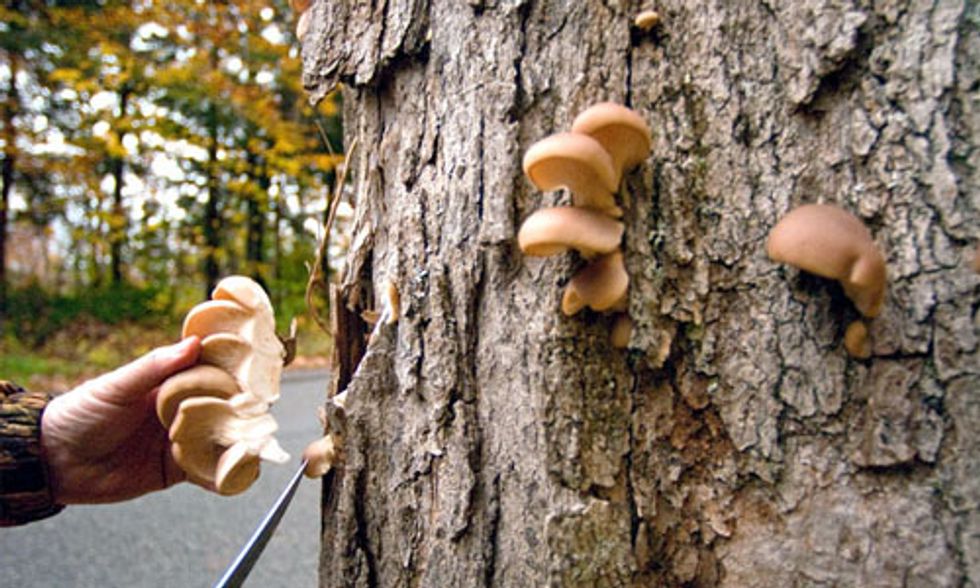 Of all my natural history obsessions, mycology is probably the least pure. Unlike related pursuits, I allow myself to be prejudiced by paying attention only to certain charismatic species. And this time of year, with the doors of winter coming down exactly when oyster mushrooms bloom luxuriously on roadside sugar maples and hen-of-the-woods are growing on oak in clusters that can weigh in above 100 pounds, I lose my interest in taxonomy entirely.

The pejorative for people like me among serious mycologists is ‘pot hunter,’ having nothing to do with a certain illegal drug or the vile habit of looting ancient ruins in the Southwest, but rather describing a person interested largely in filling a skillet or soup pot with edible, delicious and often medicinal wild mushrooms.

In my own defense, my brain is already pretty full with the names, growth habits and behavior of everything from birds to wildflowers and trees. I can ID northeastern trees of all kinds and in all seasons by their bark, tell almost all of our birds apart by ear and accurately survey the Atlantic coast’s underwater gardens from behind the lens of a dive mask.

But mushrooms provide a whole new challenge, a stunning diversity and distribution which remains about as uncharted as the sea itself—it’s estimated that we’ve only described about 10 percent of the fungal kingdom. Their way of life is largely mysterious and new amazements are constantly unearthed, like the finding that some fungi actively pursue and eat animals, and by extension, so do trees like white pine that collaborate symbiotically with those fungi.

As a field, mycology presents probably the best avenue, even better than entomology, for a citizen scientist to make a contribution to biology (and perhaps name a novel species after his or her mom). The best way to get started is to locate a local mycology society and join one of their upcoming forays, but more generally, citizen science itself is of growing importance, as Sharman Apt Russell points out in Orion magazine:

“The sheer number of citizen scientists, combined with new technology, is changing how certain research gets done. Over a half million people have participated in Galaxy Zoo, an online program in which volunteers catalogue the shape of galaxies. A quarter million play the video game Foldit, helping biochemists synthesize new proteins. In the S’Cool Project, school-aged citizen scientists report their observations of clouds to help validate the accuracy of NASA satellites, timing their cloud-watching to the very moment a weather instrument is passing over and measuring the same clouds. Two hundred thousand volunteers help the Cornell Lab of Ornithology track birds, and these birders are working hard; a million observations are reported each month on the lab’s online checklist.”

(And, it must be said, this is an essay during which the author actually increases society’s knowledge of tiger beetles through a simple observational experiment).

As I find more time, I’ll delve deeper into mycology and for many reasons, including the fact that many species are anti-viral, anti-fungal, anti-tumor and overall offer a boost to the immune system of anything that devours them, like people. Some of these species are even able to be harvested while our world is devoured by deep snow, so their detection and harvest provides a healthy side pursuit while out tracking animals deep into the winter.

So to all my fellow pot hunters, I wish you a fine end to your season (or beginning, hopefully, there on the western side of the country), and offer you a mild challenge to learn more of the ancillary, if less edible members of the tribe. It will do us all well.