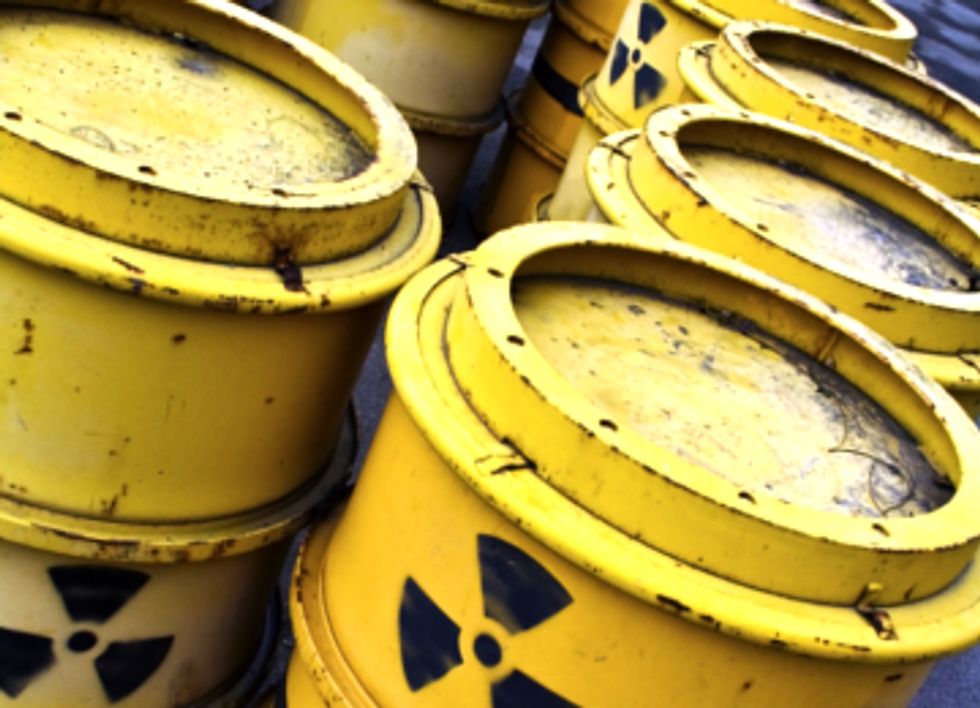 Amid all the push back to fracking, most of the attention has focused on what drillers put into the ground. The amount of water used. The chemicals that make up energy companies' secret mix. Whether these dangerous chemicals will contaminate our drinking water. But one of the biggest problems of fracking, indeed, the Achilles heel of this innovative drilling technique that is giving fossil fuels a second lease on life, is the waste that comes out of the ground.

How will we handle the massive amounts of toxic waste that each well produces when fracking is used? Will we dump the millions of gallons of wastewater produced from each well into rivers, pass it through sewage treatment plants, allow it to evaporate in open-faced pits, inject it into the ground at special disposal sites?

One of the reasons these questions are so urgent is that this wastewater is often radioactive. When it was revealed in February 2011 that Pennsylvania was not only sending millions of gallons of this waste, sometimes with radium levels 3,000 times the safe level—through sewage treatment plants incapable of correcting radioactivity—which then discharged into rivers, state officials panicked and denied there was cause for concern.

This January, the Pennsylvania Department of Environmental Protection (DEP) announced that it would undertake a “comprehensive” study of radiation from oil and gas development in the state, home to the most actively drilled parts of the Marcellus shale. At the same time, the agency re-publicized results from tests downstream from wastewater treatment plants, which until 2011 had taken Marcellus wastewater carrying naturally occurring radioactive materials like radium and uranium.

“Most results showed no detectable levels of radioactivity, and the levels that were detectable did not exceed safe drinking water standards,” the agency said in its January statement.

But it turns out those results weren’t the whole story when it comes to the handling of radioactive materials from the state’s fracking boom.

In May, the U.S. Environmental Protection Agency (EPA) announced it has reached a settlement with an industrial waste treatment plant which had been discharging natural gas wastewater into a Pennsylvania creek without properly treating it. Environmental regulators discovered high levels of radium around the plant’s discharge pipe. The plant was fined over $80,000 and the operator agreed to make up to $30 million in upgrades before accepting any more Marcellus shale wastewater.

The industrial wastewater plant, Pennsylvania Brine Treatment Josephine, was first studied by Conrad Volz and a team of students at the University of Pittsburgh's Graduate School of Public Health, who found high levels of contaminants associated with drilling wastewater in Blacklick Creek, part of the Allegheny River watershed, where the plant discharged. Professor Volz’s team did not test for radioactivity, however. In April 2011, the Pennsylvania DEP asked drillers to voluntarily stop trucking wastewater to other plants that discharged into the state’s rivers and streams.

There's a saying among environmental regulators that "dilution is the solution to pollution" because when contaminants are watered down, levels of toxic materials can fall below safety thresholds. Wastewater from treatment plants is discharged into rivers and streams, so many shale gas boosters argued that even if treatment plants could not remove radioactive materials, the fast-moving water could dilute any resulting contamination. But the tests around the Josephine plant showed that dilution was not sufficient—levels of radium 226 over 65 feet downstream were 66 percent higher than the drinking water standard.

The levels of radioactivity found at the Josephine plant were not high enough to cause any health threat to passersby or to workers, but those levels are high enough that if the radium entered a person's body—whether through an open wound or through drinking contaminated water—there could be a health hazard. Radium also bioaccumulates in fish, meaning that fish in the creek who ingested the radioactive metal could carry higher levels than were in the water.

In February of 2011, several months before those tests were taken, Pennsylvania had drawn national attention for allowing plants that discharged into drinking water sources like rivers and streams to take Marcellus wastewater—which carries higher levels of radioactive materials than waste from other oil and gas formations—without testing at any point to make sure that drinking water standards were not exceeded. Desmog has previously reported on the threat from radionuclides in shale gas waste.

A different round of tests of Pennsylvania rivers near treatment plants had been seized on by former state environmental officials and trumpeted as an indication that wastewater was being properly handled and that state regulations were sufficient to police the industry. But the multi-year Clean Water Act investigation of the Josephine plant, conducted under the watchful eye of the feds, turned up a markedly different result.

Pennsylvania state regulators’ long-run difficulty policing the industry is particularly troubling because right now, the agency charged with protecting the environment in Pennsylvania is in turmoil. The DEP in this state—ground zero for the shale gas boom—is being run, part-time, by a person with no environmental background who is pulling double-duty as the governor’s deputy chief of staff.

Of course, this interim appointment was made because the former secretary, Michael Krancer, stepped down while under investigation by the state’s auditor general for how his office handled water contamination testing related to shale gas.

All of this calls into question the ability of states to regulate fracking booms effectively.

The hazards from shale gas drilling are complex. Another concern related to the high levels of radium in shale wastewater is the radon produced alongside the natural gas. Radon, a highly carcinogenic gas, is produced when radium undergoes radioactive decay and does not burn so it could be released into houses and workplaces by gas-fired appliances.

Earlier this month, kitchen workers in New York City organized a public forum on the gas and the possible risks for the health of New Yorkers if a new pipeline, designed to ship Marcellus gas to major metropolises in the region, is constructed.

Gov. Cuomo (D-NY) very recently announced that he plans to make a decision on the state’s drilling moratorium soon. New York’s current assessment of the dangers from radon is thin, experts have alleged, pointing out that only a few paragraphs are devoted to the lethal gas.

Plans are underway to construct a pipeline that would carry Marcellus gas to the nation's biggest city, New York City. But if that happens, some experts warn of a potential public health crisis. The problem centers around the way that radon breaks down. Radon has a half life of only 3.8 days, meaning that if the gas takes about a week to travel from the wellhead to the consumer, radons levels will have fallen off by 75 percent. But the Spectra pipeline would take Pennsylvania Marcellus gas to New York in less than a day, giving the radon very little time to decay.

New York’s current plan is to test for radon once drilling goes forward, “in order to verify that they do not pose an unanticipated health risk to end-users of the gas,” Elizabeth Glass Geltman of CUNY School of Public Health told a crowded room at the public forum this month. “If you wait for that to happen, the infrastructure will be in place and the argument will be that we can’t change the infrastructure,” she warned.

The science on radon in the gas is evolving—the United State Geological Service (USGS) sampled a tiny handful of wells in a preliminary analysis and the levels they found in that sample were on the low end of the estimates made by experts. But that study only looked at three Marcellus wells, and the USGS said there was a need for further testing. The levels the USGS found were as high as 20 times the levels EPA considers safe for indoor air, so dilution should be plenty to take care of any possible health concerns, but some experts believe other Marcellus wells may carry much higher levels of radon—and have calculated that it could pose a serious public health threat.

In the meantime, some in New York are pressing for change through the legislature. A state bill would require monitoring for radon in all natural gas (not just Marcellus gas). But in neighboring Pennsylvania, the state only plans radon testing “as appropriate” as part of its ongoing radioactivity study.

Time will tell how thorough those tests will be.