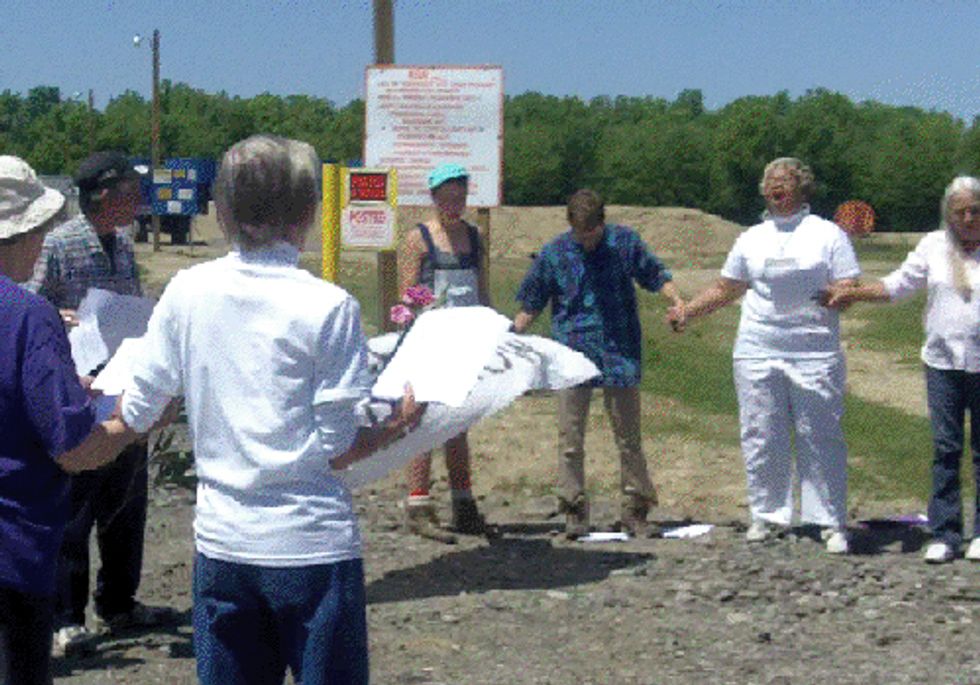 About 20 residents of Trumbull County, OH and surrounding areas gathered in prayer May 19 at a newly operating fracking wastewater injection well in Vienna Township.

According to event organizers from Ohio Fracktion, the service was designed “to pay respects to those who have died of cancer, who are experiencing neurological damage, who have chronic lesions on their skin, who have lost the ability to have children, and whose water has been poisoned by drilling chemicals or are forced to breathe the toxic airborne byproducts of hydrofracking.” This gathering was held in solidarity with a national Day of Direct Action Against Extraction, and one of a series of events building momentum for the largest action against fracking in the country’s history, scheduled for June 17 in Columbus, OH.

Reverend Monica Beasley-Martin of Liberty Township delivered a sermon at the well, leading residents in prayer and song. The Reverend spoke to humankind's Biblical responsibility to act as guardians of the earth, and decried fracking and other forms of extraction: “We are allowing such things as tar sands extraction, off shore drilling, mountain top removal, and hydraulic fracturing, which is becoming increasingly popular locally, to destroy both the earth God created and one another.”

The Vienna well is one of more than 170 injection wells in Ohio receiving toxic fracking wastewater from as far away as Texas. Five injection wells in the Youngstown area have been shut down in the wake of a dozen earthquakes that were caused by injection at D&L’s Ohio Works Drive Well, including a 4.0 New Year’s Eve tremor.  The Ohio Division of Natural Resources (ODNR) concluded that injection of fracking waste was the cause of these quakes. Reverend Beasley-Martin spoke to the earthquakes in her sermon: “The definition of insanity is to continue doing the same things, over and over, and over again, while expecting different results. What have these earthquakes taught the Ohio Department of Natural Resources? Apparently, absolutely nothing, because here we stand, at the site of yet another injection well, that ODNR insanely granted permission to be built.”

Fracking has been linked to cases of water contamination in towns across the country including Dimock, PA and Pavillion, WY, and methane emissions from drilling were the cause of a 2007 home explosion in Bainbridge, OH. The gas industry is exempted from the Clean Water Act and Safer Drinking Water Act, and as a result, many of the chemicals used in drilling are unknown. On May 15, the Ohio State Senate approved industry-backed legislation that would gag doctors from sharing information about patients’ exposure to hydrofracking chemicals.

Residents who attended the service explained that they were concerned about impending development of fracking and injection wells near their homes and are committed to taking action to stop fracking. “We are here because we refuse to be a sacrifice zone,” said John Williams, 55, of McDonald, OH. “Companies like BP and Chesapeake depend on treating Ohio as their personal dump to keep their toxic operations running. It's time for all of us to stand up and say no to poisoned water, polluted air and man-made earthquakes.”