These Companies Support Climate Action, So Why Are They Funding Opposition to It? 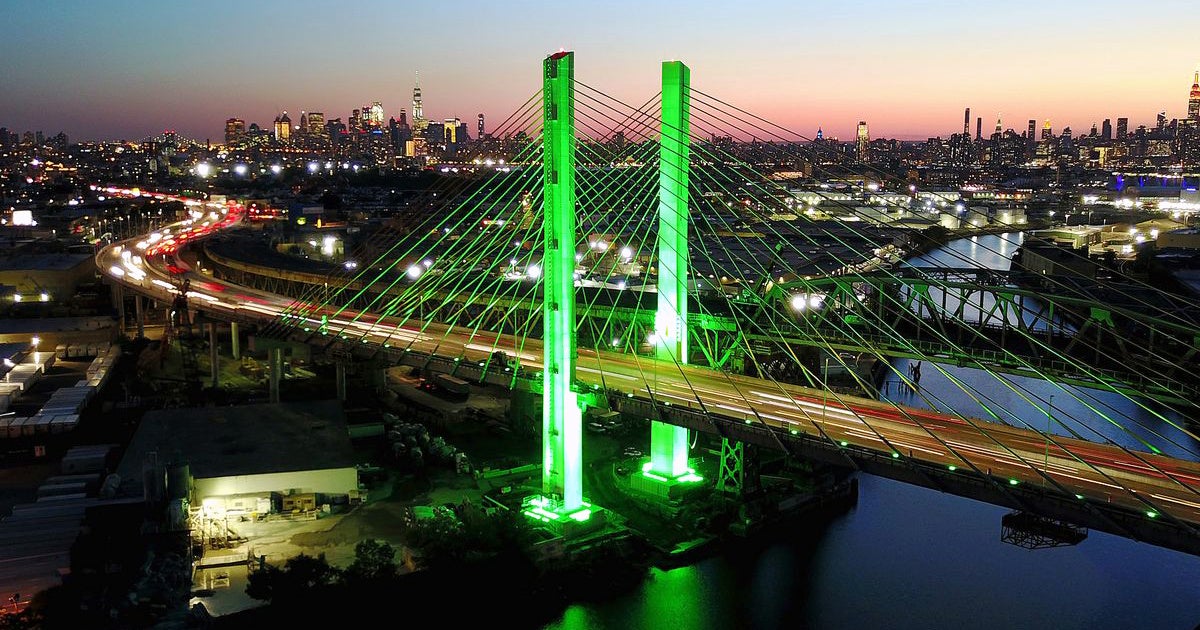 The international climate-fighting pact would create jobs, Google said. Leaving the deal known as the Paris accord would be bad for business, top executives from Bank of America and Coca-Cola argued. When President Donald Trump committed to yanking the U.S. out anyway, PayPal and Western Union countered “We are still in.”

These corporate titans and at least 22 others were among those who sought to preserve the U.S.’ role in the landmark Paris agreement ratified by about 160 countries. So why exactly would these 27 business powerhouses also support a GOP group that’s fought to undo a key Obama-era domestic climate initiative?

The answer is, well, complicated. The overwhelming majority of these companies have no overt incentive to undermine the U.S. climate effort. One leading solar company, in fact, had a driving financial imperative to cheer it on. These companies’ donations of more than $3 million to the Republican Attorneys General Association over the past three-and-a-half years speaks instead to the difficulties for corporations trying to navigate the political system in a country that’s polarized—particularly on climate change.

In giving to the GOP group, many of the big businesses said they were simply following a time-honored corporate tradition of donating to both parties—though most of these companies donated more to the Republican group than its Democratic counterpart. And they nodded at the political reality: A business needs to engage with elected officials on both sides of the aisle to influence policy, they said.

“This is a function of our democratic system,” Verizon subsidiary Oath said in a statement, speaking on behalf of one company on the list that it recently acquired, Yahoo.

But campaign finance experts countered that business officials can influence policy without writing a check to decision-makers like attorneys general—advocating their policy positions through lobbyists, for example. Because these businesses have said climate action is a priority, making political contributions that can work against that goal puts their reputations or even revenues at risk, these experts said.

“I don’t doubt that their public statements about the Paris climate agreement are sincere but it matters that when it actually comes down to how they spend their money, they’re giving to politicians that have almost the exact opposite goal,” said Daniel Weiner, senior counsel for the Brennan Center for Justice’s Democracy Program, which advocates for campaign finance reform. “It doesn’t mean that they’re actually lying, but it does lead one to wonder how strong their commitment to fight global warming actually is.”

The job of state attorney general has in recent years become increasingly high-profile and partisan. The GOP group, also known as RAGA, and the competing Democratic Attorneys General Association didn’t even exist until 1999 and 2002, respectively. Now, both are sharply focused on election fundraising to increase their parties’ control of top state prosecutor jobs.

Attorneys general have flexed their muscles in a variety of ways, most recently when the Trump administration said it was partly threats of litigation from GOP AGs that caused the president to halt a program protecting from deportation certain immigrants brought to the country as children. A coalition of Democratic AGs then promptly sued.

But it’s the domestic Clean Power Plan that has received an outsize share of energy from Republican attorneys general. RAGA has called the rule “unlawful” and a prime example of the federal Environmental Protection Agency exerting authority that it doesn’t have to carry out a political agenda against fossil fuels. The GOP group has warned that it would kill jobs, raise electricity prices and put in jeopardy the power grid’s reliability. (These arguments were disputed by the Obama administration).

RAGA, which did not respond to requests for comment, isn’t the only Republican fundraising group whose elected officials have doubts about global warming or the necessity of combating it through federal action. But the attorneys general association has stood out for making the power plan specifically its Enemy No. 1. The victory that tops RAGA’s list of accomplishments on its website: Convincing the U.S. Supreme Court in 2016 “to halt implementation of Obama’s signature climate change initiative.”

The Republican attorneys general were likely crucial in securing the Supreme Court decision to keep the rule from taking effect while a lower court considered its legality because they “gave the opposition to the plan a legitimacy it wouldn’t otherwise have had,” said Daniel Farber, a law professor with the University of California, Berkeley. That pause left the still-in-limbo plan more vulnerable to the new administration, which is now determining its next steps after Trump vowed to dismantle it.

“As we’ve seen with Obamacare,” Farber said by email, referring to health care reform efforts, “once something has gone into effect, it becomes a lot harder to undo it.”

These companies recently advocated for the U.S. to stay in an international climate change-fighting pact known as the Paris accord. Still, they donated from 2014 to 2017 to the Republican Attorneys General Association as it organized against the Clean Power Plan, the domestic effort to reduce the power sector’s planet-warming emissions. Here’s what these companies contributed to RAGA and its Democratic counterpart during that period. See the companies’ comments here. 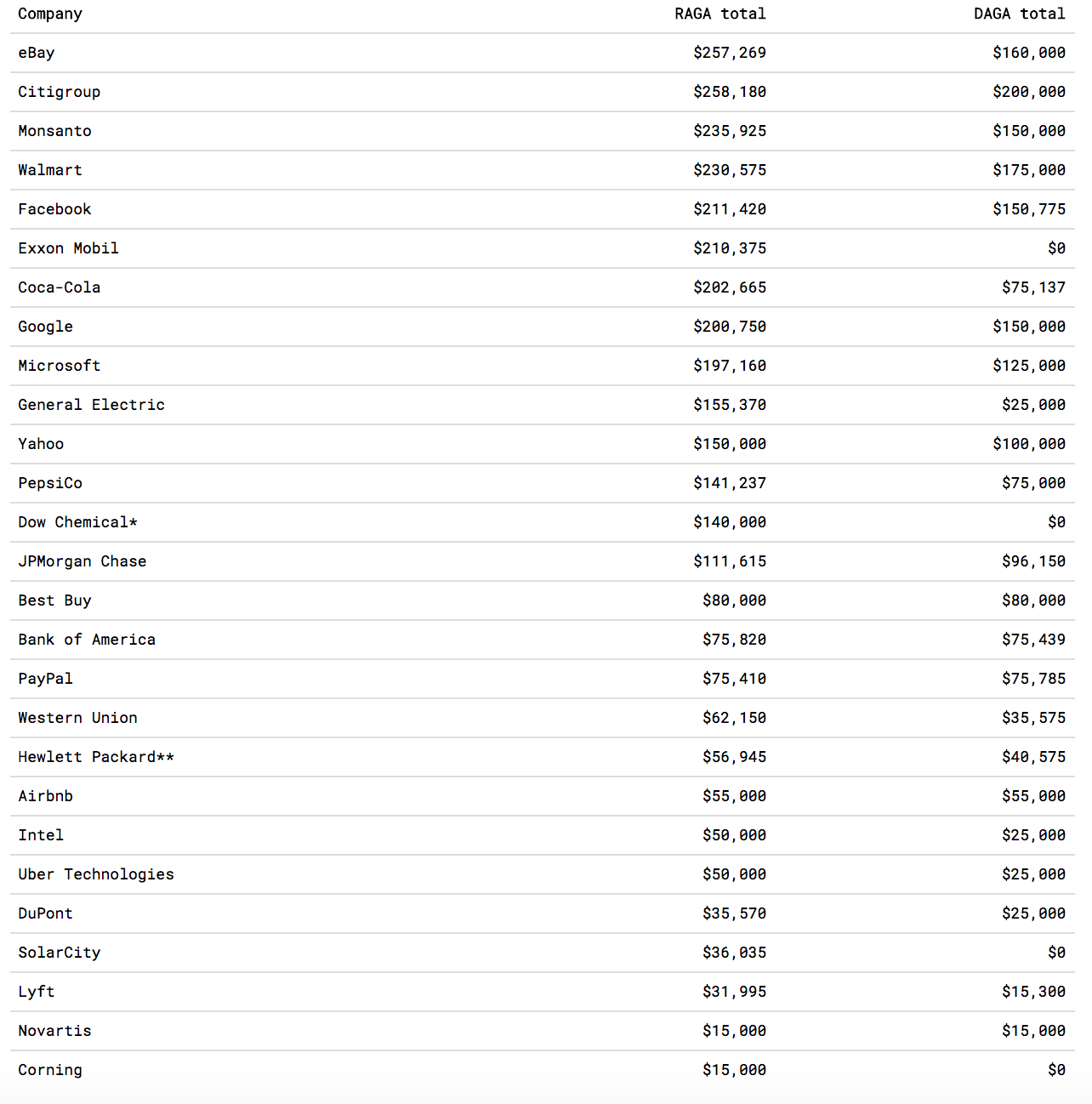 * Contributions for Dow Chemical and Corning each include a $15,000 donation by their former joint venture, Dow Corning, before it was reorganized

Some political contributors couldn’t be happier. Though RAGA has said it reached its conclusion that the power plan was an unconstitutional overreach on its own, separate from political contributions, coal conglomerate Murray Energy was among those that donated to the group, then urged legal action, Bloomberg News reported.

The 27 companies that spoke out against leaving the Paris accord and then supported RAGA are another matter.

Only two pushed back in some way against the Obama administration Clean Power Plan fought by RAGA—Exxon Mobil, which panned it, and General Electric, which advocated for several changes while it was still a proposal. Far more were active on the other side, urging officials to support the rule—or even, in the case of Google and Microsoft, filing arguments in court to try to counteract the lawsuit by the attorneys general whose political group they’d helped fund.

The most striking example? SolarCity, the nation’s largest residential solar-panel provider. Its investors were certain the Obama power plan would be good for business—and its absence was bad news. The company’s stock nose-dived 26 percent the morning after the Supreme Court paused the rule.

So why did it do that? SolarCity declined to comment. Several others didn’t respond, including Bank of America and Google. But other companies, such as PayPal, echoed a common theme: the need to support or work with candidates and organizations on both sides of the aisle that deal with issues central to their business.

During the timeframe that the 27 companies donated about $3.3 million to the Republican group, 23 of them collectively gave about $1.9 million to the parallel Democratic organization.

Some companies, including JPMorgan Chase, told the Center for Public Integrity that their contributions to RAGA are “dues” or that they are “members”—as if the political group with a mission of getting officials elected is no different than a trade association. Western Union said its membership in both attorneys general groups allows it to “properly educate” state prosecutors and support other initiatives in individual states.

Indeed, RAGA has pitched itself that way (and still does) to would-be contributors, laying out the “membership benefits”—access—for various amounts of money, according to internal documents obtained by The New York Times. The Democratic group has done the same, the newspaper reported in a 2014 investigation.

Sean Rankin, executive director of the Democratic Attorneys General Association, said the money flowing to its attorneys general isn’t changing their stance on issues. But they see an existential need to catch up with their Republican counterparts’ fundraising. The attorneys general for twenty states and the District of Columbia are Democrats, down from 32 in 2010.

Between 2014 and mid-2017 alone, RAGA raised nearly three times as much as the Democratic group from all sources.

“The money is significant,” Rankin said. “It was money that played a role to put more Republican AGs into office.”

For Coca-Cola, which gave just more than $200,000 to the Republican group and about $75,000 to the Democratic group between 2014 and mid-2017, political donations aren’t earmarked to support all the policy positions held by recipients. “Our goal is not perfect philosophical alignment,” the company said.

“We recognize that it is impractical and unrealistic to expect that we or our stockholders and stakeholders will agree with every issue that a politician or trade association may support, particularly given our strategy of bipartisan giving,” William Moss, a spokesman for Intel, wrote in an email.

Risks to the Bottom Line

But the implicit dilemma is that political spending is an action, even when companies split their contributions to the country’s two major parties down the middle, said Ann Skeet, director of leadership ethics at Santa Clara University’s Markkula Center for Applied Ethics.

“There’s actually policy implications that go with the money that they spend,” Skeet said.

The Conference Board, a business membership and research association, warns companies flat out in its corporate political activity handbook that that they “must be mindful of the risks” to their reputation or bottom line if they belong to trade groups opposing their positions on major issues. Bruce F. Freed, a co-author of that report—which cites climate change as a potent example of priority clash—said the same point is true of corporate political giving to any group. Freed is president of the Washington watchdog Center for Political Accountability.

Target, which is not one of the 27 companies on the Center for Public Integrity’s list, could tell them a thing or two about PR problems. The company, which built a reputation for gay-friendly policies, faced boycotts in 2010 after contributing $150,000 to a super PAC backing a candidate who opposed gay marriage. The company apologized after initially saying the donation fit into Target’s strategy of giving to pro-business candidates “on both sides of the aisle.”

“There are real consequences,” said Freed, “when there is a disconnect.”