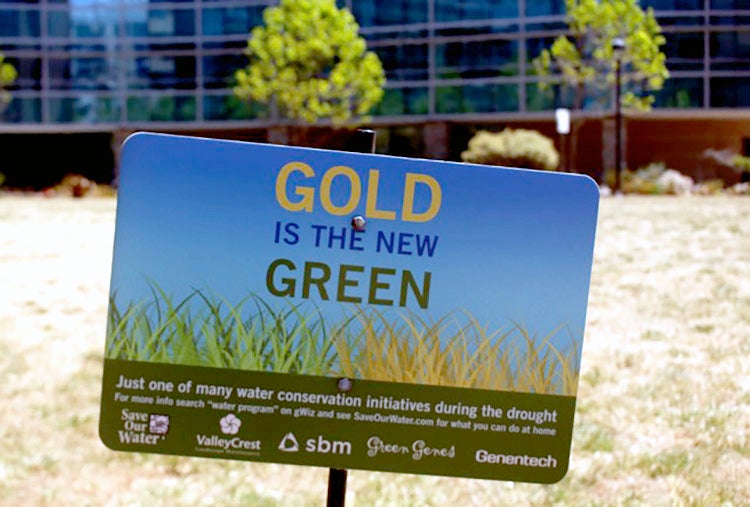 Located at depths up to 10,000 feet below the surface, the newly identified groundwater in the state’s Central Valley is likely to be salty and may have been contaminated by oil and gas drilling. Pumping and cleaning the water from such extreme depths could also be costly—more costly than turning to water sources we know we can “tap,” like treated wastewater.

Everyday an estimated 1.5 billion gallons of treated water are flushed into the ocean in California. But what if these billions of gallons of wastewater collected from kitchens, bathrooms and laundry rooms—and treated by municipal wastewater facilities—were further purified and put to use to supplement California’s water supplies?

Recycled wastewater, highly purified, is a resource the state should be tapping. And some California companies are already doing it.

Take Sierra Nevada, the nation’s third largest craft brewer. Headquartered in Chico, California, the company has long been ahead of the curve when it comes to sustainability, setting and achieving goals for waste, energy, water and transportation.

Solar covers every inch of the brewery’s roof, providing 20 percent of its energy and combined heat and power provide much of the rest. Among its many other initiatives, 99.8 percent of its waste is diverted from the landfill and its onsite composting facility recycles spent hops, grains and food scraps to fertilize the garden that supplies fresh produce for its onsite restaurant. 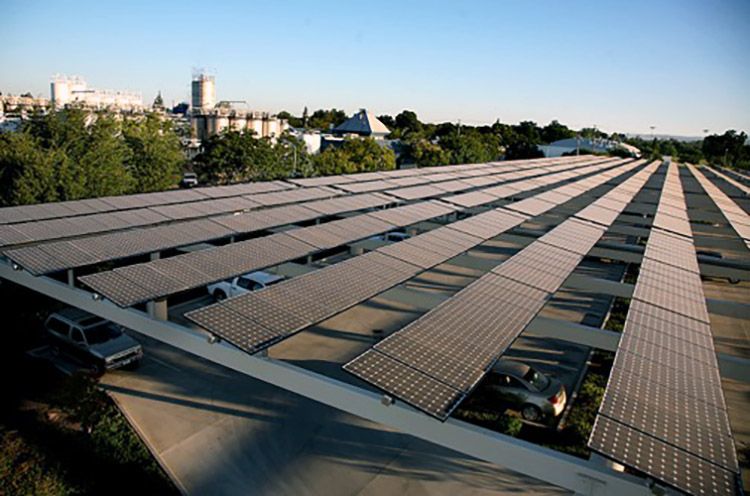 Solar covers every inch of Sierra Nevada’s brewery in Chico, California. Now the sustainably-oriented business plans to recycle and reuse its brewery process water to cut its water use in the drought-stricken state.

“It’s how Ken [Sierra Nevada’s CEO] wants to run the business,” said Cheri Chastain, the company’s sustainability manager. “There’s a lot you can do on the sustainability front that has a reasonable payback with a moderate ROI.” 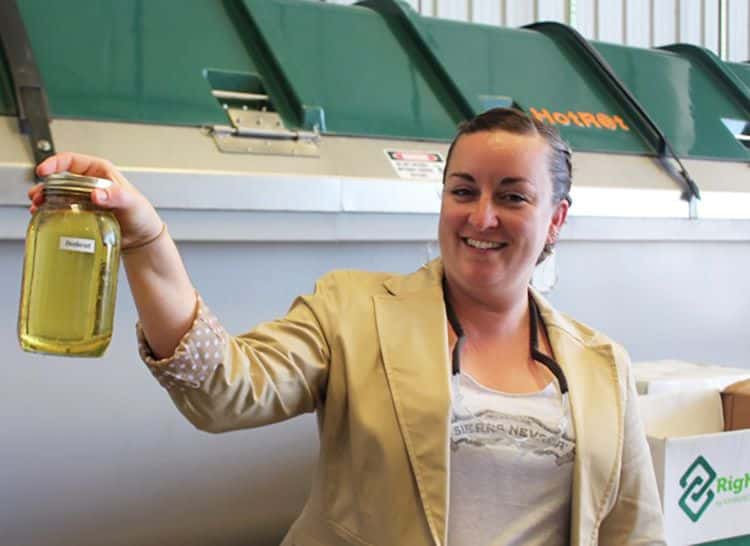 Cheri Chastain, Sierra Nevada’s sustainability manager, says, “There’s a lot you can do on the sustainability front that has a reasonable payback with a moderate ROI.”

Now the brewery plans to recycle an estimated 75,000 gallons of process water that it produces daily at its California brewery and reuse that water for its cooling towers and boilers. Eventually Sierra Nevada would like to use the remainder of the treated process water to recharge groundwater aquifers in Chico, thereby helping all water users in the basin, but that will take a slew of approvals from local and state authorities.

Craft breweries use a lot of water, anywhere from 3 to 7 gallons for every gallon of beer produced and Sierra Nevada’s plans will help the company achieve deeper water savings. Already it’s been able to improve its water efficiency through small steps, such as by fine tuning rinses and fixing leaks and simply through economies of scale as the beer company has grown larger. It now uses 4.25 gallons of water for every gallon of beer it produces, a statistic that makes Chastain proud.

But as Sierra Nevada projects future growth in a water-constrained state, it recognizes the need to become more self-sufficient regarding water.

Genentech, a biotechnology company, based in South San Francisco, has reached a similar conclusion. Water is a critical ingredient for production and for the precision cleaning that’s required in the manufacturing of life-saving medicines. And in California, ensuring a consistent supply of high quality water is becoming increasingly more difficult. 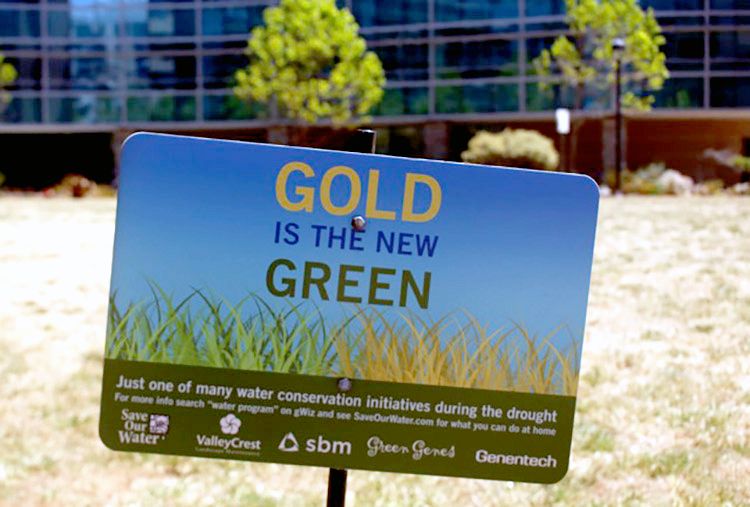 Genentech has implemented a suite of water saving initiatives since 2009, such as for outdoor water use and now plans to install a centralized gray water recycling system that could help the company’s South San Francisco campus achieve close to 20 percent savings in absolute water use.

It’s been implementing a suite of initiatives to increase its water efficiency since 2009, cutting water use over five years by a whopping 87 percent per unit of product at its South San Francisco facility. But to get to absolute water reductions, the company needs to take bolder steps.

One such step the company is planning is the installation of a centralized gray water system that could cut its water use by approximately 60 million gallons of water per year. The system would recycle process water for reuse in cooling, irrigation and toilets.

Then there’s Fetzer Vineyards, a Mendocino County winery, which has taken an entirely different approach to recycling its wastewater. Fetzer is building an innovative biological wastewater treatment system that will use the digestive power of red worms and microbes to recycle 100 percent of its wastewater.

That’s right—worms! And billions of them. 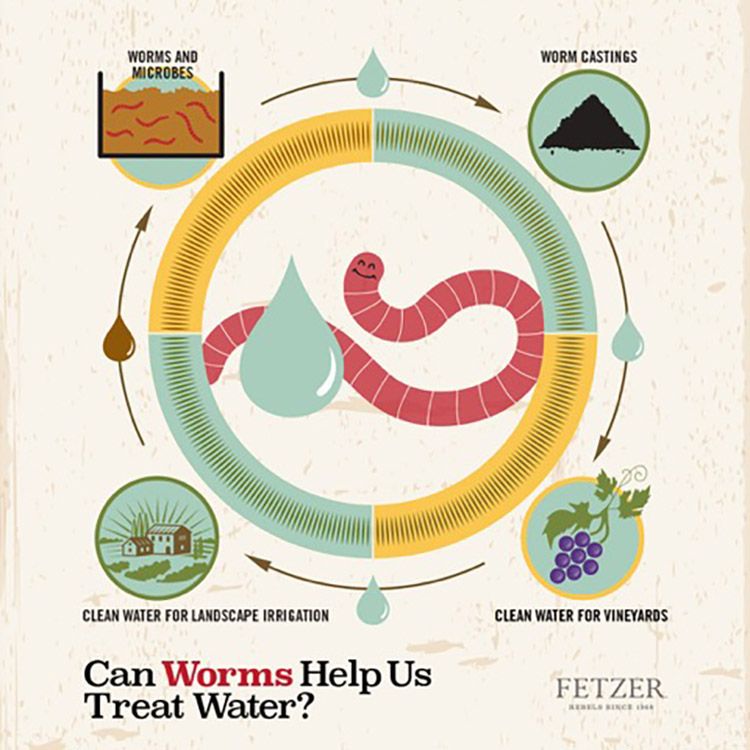 Fetzer Vineyards estimates the system will treat 15 million gallons of water annually, which the winery will re-use for vineyard and landscape irrigation. The system accrues energy savings up to 85 percent over current wastewater treatment technologies and produces worm castings, which enhance fertilizer applied to vineyards.

Fetzer Vineyards has already reduced water used in its winery by employing a cleaning product that saves 200,000 gallons annually, but the new wastewater treatment system takes its water efficiency up a notch.

These three companies, which are doing their part to create a more sustainable water future in California, share a few commonalities. First, their leadership recognizes the value of embedding sustainability across all aspects of their operations and decision-making.

Second, they have all joined Ceres’ Connect the Drops campaign, an effort to elevate the voice of business leaders in advocating sustainable water policies in California. Each of the campaign’s two-dozen members are implementing their own initiatives to preserve the state’s precious water supplies while lending their voices to critical conversations ongoing in Sacramento about the state’s water future.

One such conversation involves clarifying the rules and regulations that will make it easier for companies and municipalities to recycle their wastewater and achieve big water savings.

“Connect the Drops is about connecting like-minded companies,” said Chastain. “And it’s about bringing our voice to legislative decisions. The more we can do that the more successful we’re going to be.”

And the more likely we won’t need to pay greater sums of money to tap the deep, possibly contaminated groundwater resources that Stanford researchers announced to the world last week.