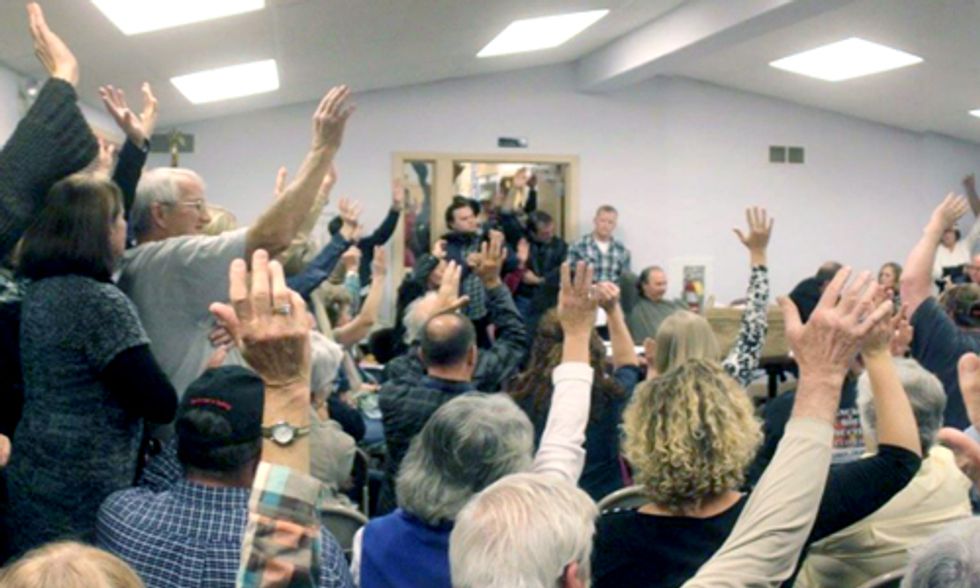 Across the country, battles are raging as communities attempt to protect the air, soil and water within their borders and the safety of their residents. These battles are taking the form of debates about whether state regulations can or should erase local home rule.

Colorado and Texas are engaged in such high-profile battles after voters in communities like Denton, Texas and Boulder, Longmont and Fort Collins, Colorado, passed fracking bans. That has opened up ongoing maneuvers and lawsuits as state governments work with oil and gas companies to uphold the exploration and extraction interests of the latter despite citizen concerns about environmental pollution, noise, traffic and infrastructure stress.

But with communities and citizens becoming more and more determined to have their say, fossil fuel interests put out one blaze only to find a dozen more flaring up. Many of those communities are using a strategy developed by the Pennsylvania-based Community Environmental Legal Defense Fund (CELDF) to address environmental issues: a community bill of rights. Now oil and gas companies are working to suppress those bills of rights.

They were successful in Ohio last week where a judge in Cuyahoga County (Cleveland) struck down the community bill of rights passed by suburban Broadview Heights voters by a 2-1 margin n November 2012 to keep additional drilling operations out of their community. The decision is considered significant because it's the first community bill of rights in Ohio to get a legal review. Judge Michael Astrab found it in conflict with state law. Many other Ohio cities have passed or attempted to pass such bills of rights, including Youngstown and Kent where they were defeated and Columbus, where activists are working to put a city charter amendment on the ballot. Oberlin and Athens have passed them.

According to the Akron Beacon-Journal, "Astrab said the city’s community bill of rights conflicts with state law that gives the Ohio Department of Natural Resources sole authority to regulate drillers since 2004."

Broadview Heights resident Tish O'Dell of Mothers Against Drilling in Our Neighborhoods (MADION), said, "We now see that at least one Court is not prepared to uphold our right to protect our health and safety. Instead, the court prohibited our city from protecting us. If no branch of our government is going to protect us from these corporate harms, then our government has ceased to be legitimate.”

Out in Oregon, citizens are fighting the same battle in a different way: they want to put it in their constitution so a judge can't overturn it. The Oregon Community Rights Network (OCRN) is working to collect signatures to get a constitutional amendment on the ballot in November 2016 that would protect the right of communities to make decisions about what goes on inside their borders and the legality of those decisions even if they conflict with corporate interests.

“It is clear that the current legal structure allows corporations to treat our communities as property," said Eron King, board president of OCRN. "We—the people –have become mere tenants of the corporations. It’s time we change that by changing our constitution to reflect that our right to local, community self-government is above corporate control.”

Among the issues OCRN cites as areas where corporations' rights can erase those of the community are growing GMOs, transporting oil and gas, spraying pesticides and building natural gas pipelines.

On the other side of the country in Lancaster County, Pennsylvania, pipelines are the issue as citizens in Martic Township mobilize under the banner of Martic SOUL (Save Our Unspoiled Land) to prevent a natural gas pipeline from passing through their community.

"In October 2014, Martic Township Supervisors announced their opposition against the construction of the proposed Atlantic Sunrise Project," the group Lancaster Against Pipelines posted on its website. "Following this announcement, residents in Martic as well as Conestoga Townships, requested that the supervisors pass an ordinance for a Community Bill of Rights. This Community Bill of Rights proposed the ban of construction of natural gas pipelines within the respective townships and the rights to local governance, sustainable energy, clean air, clean water among other things. The proposed ordinance was shot down, in both townships."

The group is running seven anti-pipeline candidates in a May election for members of the local Government Study Commission and has turned to CELDF to help it with a Community Bill of Rights to protect home rule.

In an editorial posted at Lancaster Online, Martic resident and activist Emily Weinstock-Collins announced the launch of Home Rule in Martic Township and support for these candidates, writing, "We are dedicated to protecting our residents and securing the future of Martic Township; home rule is our next step toward achieving these goals. True democracy gives power to the people, not to the highest bidder.  Home rule is a step towards that democracy."

Citizen activists in New Hampshire take a dim view of a pipeline that would cut through their towns carrying natural gas for export. Image credit: NH Pipeline Awareness

A pipeline is also outraging citizens in southern New Hampshire, where communities are mobilizing against a large-scale natural gas pipeline, the Northeast Energy Direct (NED), that would cut through their towns. Three of the five towns impacted have already voted to take action against pipeline company Kinder-Morgan with the other two set to vote this week, following extensive community protests.

"For too long, decisions related to energy have been controlled by corporations and individuals motivated by financial and political interests rather than by the public good," New Hampshire Pipeline Awareness.org posted. "This project is more of the same. The prospective benefit to the fossil fuel industry is clear, but the alleged public need has not been demonstrated."

"One thing I love about New Hampshire is that we are politically devoted to local control,” said Medicine Story, a Wampanoag Indian and longtime resident of Greenville, one of the impacted communities, told the Monadnock Ledger-Transcript. “If this pipeline was something that most people in the area wanted, then that’s what everyone would work toward. Clearly, that isn’t the case here.”