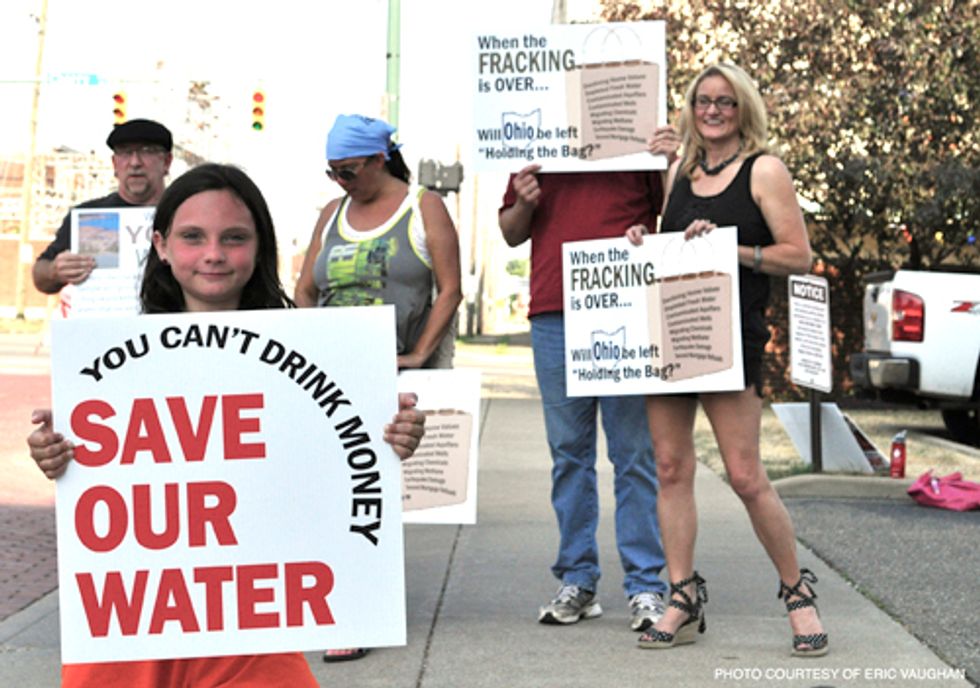 Mourning the death of the oil and gas worker, protestors marched in a silent vigil to Canton City Hall, where they testified in opposition to the Mayor’s plan before the Canton City Council.

Earlier this year in Healy's State of the City address, he dubbed Canton the “Utica Capital,” clearly demonstrating his support for the controversial practice of shale gas drilling. But a growing number of residents and concerned council members are now working to block his efforts to drill on city-owned property.

Kristine Vaughan, local coordinator for Food & Water Watch, said, “We are asking city council to uphold its responsibility to protect the health, safety and welfare of Canton residents and water customers. Risking permanent contamination of our city water supply for a short-term gain hardly seems logical. I’m certain that neither Mayor Healy nor city council wants to jeopardize the health of their constituents for a budget band-aid.”

Mayor Healy’s budget proposal to lease city-owned land would reportedly generate a one-time payment of $500,000 which would be used to address a projected $3.7 million deficit in 2013. At a July 2 council hearing on the topic of leasing, council members expressed concerns about water contamination, some saying Canton should protect water at all costs.

“Too many communities in Ohio are looking at the potential for a big windfall from the new shale gas drilling as an answer to their economic woes. The reality is that putting faith in a boom and bust venture could leave Canton in a bigger financial mess than what they are currently facing, with increased burden on infrastructure and potential for earthquakes,” said Alison Auciello, organizer for Food & Water Watch.

Reuters recently cited Chesapeake Energy’s own economic problems, reporting, “beset by growing governance and financial problems, and a sharp slump in natural gas prices, the No. 2 U.S. gas driller is reducing by half the ranks of its agents, known in the industry as landmen.”

In May, EcoWatch provided exclusive information about the Chief Executive of Chesapeake Energy Aubrey McClendon and his deceptive ways, leading to Chesapeake emerging as one of the natural gas companies least trusted by the environmental community.

“Canton simply cannot afford to take this risk right now when so many questions are left unanswered about fracking. The practice should be banned to protect us from the associated dangers, especially in light of this morning’s terrible tragedy in Bolivar Township,” said Eric Vaughan, a Canton water customer.