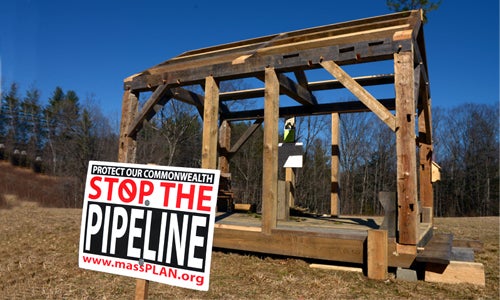 You wouldn’t suspect that a guy who builds things for a living would become the architect of a hugely popular symbol against the building of something else, but Will Elwell and his community of Ashfield, Massachusetts, have stumbled on just such a symbol. They are against the building of the Northeast Energy Direct pipeline, which energy company Kinder Morgan subsidiary Tennessee Gas Pipeline Company wants to trench through New York and Massachusetts to carry gas from the fracking fields of Pennsylvania to the coast. 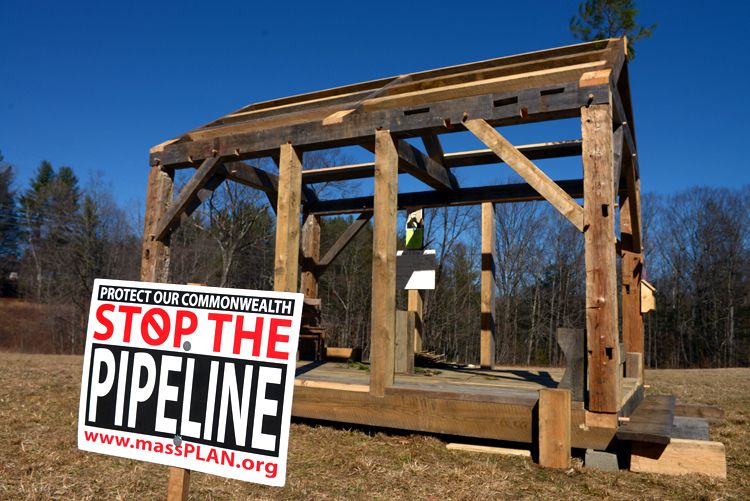 Residents of this proud New England town (where also I live) and many others around it strongly object to the notion of a corporation “taking” private and public land for this giant project, including state forestland and parcels conserved in perpetuity by land trusts, and have repeatedly denied company requests to survey their properties and farms, which has slowed the proposal’s progress. Meanwhile citizen groups are preparing for civil disobedience alongside an effective grassroots education campaign that has won the support of many local, state and federal politicians.

That emphasis on civil disobedience, and wondering what more he could do for the cause, is what really rang a bell in Will Elwell’s head. A skilled timber framer, he offered to create a direct reference to beloved Massachusetts figure and father of this style of resistance, Henry David Thoreau, by erecting a replica of the great writer’s cabin on the hayfield of his neighbor, which itself is directly in the path of the proposed pipeline. Some of the beams were even salvaged from an 1800s-era Massachusetts barn, making the historic figure and new structure contemporaries of sorts.

As noted widely in the progressive press (Democracy Now and Common Dreams) and international media (RT), an enthusiastic group of 30 neighbors, activists and even local politicians turned out to help Elwell raise the beams on a recent weekday, culminating in a picturesque symbol of defiance. In the coming weeks, a roof, walls, and wood stove will be added, but for now, the key components are a sign board and journal that visitors have been using daily to share their frustrations, fears and hopes for the future of this place without a pipeline.

“I wanted to do something that would show my discontent with the proposed pipeline,” Elwell told me, “but in a creative and beautiful way. And I wanted to occupy the proposed pipeline pathway and stop the project. This is an important and tangible symbol, and represents a place of resistance which many, many, people can now identify and help occupy.”

Here's the replica of Thoreau's cabin being built in the path of Kinder-Morgan's #fracked gas pipeline. Beautiful! pic.twitter.com/1ORbNOEDXa

As far as ideas to rally around go, it’s certainly an effective one. But how practical it is in real pipeline-pausing terms is a bigger question. One way that Elwell has answered that was by getting a building permit:

“A building permit is not required for any outbuilding that is less than 200 square feet, but we wanted it to be registered and on record, because in order to move or demolish it, that would require its own permit. That would help raise awareness of the intent, and we could prepare to occupy the cabin (before its possible demolition).”

Fellow Ashfield pipeline resistance organizer Jim Cutler hopes to use the cabin as a rallying point for further activism and envisions it as a space that will host speakers that are eloquent on the issues.

Elwell thinks this one cabin is not a big enough symbol, however, and hopes to see more of these local rallying points pop up along the pipeline’s possible path. “I would like to see a structure at every intersection along the proposed route,” he said.