3 Communities Who Stood Up to Big Oil and Won 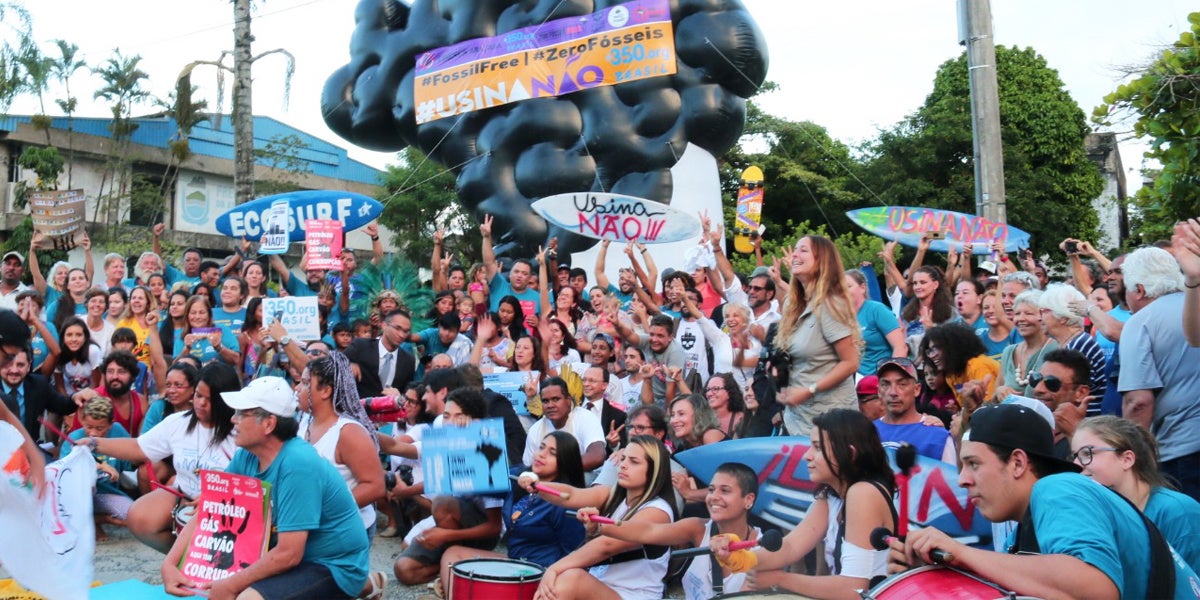 Groups of citizens have been organizing worldwide to fight against fossil fuel industry’s negative impacts on their lives. These impacts are either direct—through expropriations of land and development of infrastructure against the will of the population—or indirect—through their role in the sharp increase of climate-altering emissions threatening health and livelihoods worldwide.

These movements are often born spontaneously in response to a present challenge or threat. Through grassroot organizing, the impact of a handful of determined citizens can grow dramatically and has, in many instances, forced fossil fuel companies to abandon projects, deal with less and less private investments or defend themselves in courts.

Here are three stories from the Philippines, Brazil and the U.S. that show how small groups of determined people have taken on large corporations and shifted the local economic and political context.

The videos have been produced by 350.org as part of the Fossil Free campaign.

Since 2015, citizens of Atimonan, Quezon province, in the Philippines, have been opposing the construction of a 1,200-megawatt coal-fired power plant.

Despite the determination of government authorities at national and provincial level to move forward with the project, the citizens of Atimonan and of the whole province have organized rallies in front of one of the banks funding the project, disrupted a meeting of the provincial board and overall voiced their concern and opposition.

Father Puno, of the Our Lady of the Angels parish in Atimonan, has been one of the most vocal regarding the potentially nefarious impacts of the future power plant, organizing a prayer-vigil attended by more than 1,500 people.

While opposing coal as an energy source, local parishioners have also discovered solar power and decided to install solar panels on the roof of the church, turning their stewardship for natural resources and people’s health into a message in support of a fast and just 100 percent renewable energy transition for all.

The citizens of Peruíbe, in the Southeast region of Brazil, have been actively resisting the development of a new thermoelectric power plant, which would have been one of the largest of its kind. Citizens have organized themselves, putting pressure on city councilors to approve an amendment to the municipal law that would prevent other large polluting projects from being built in the city.

After a complicated legislative process, which lasted months, the city council finally approved unanimously the amendment.

Peruíbe has clean and sustainable energy to spare and holds unquestionable tourist potential. The region is one of the last reserves of continuous Brazilian Atlantic rain forest in the world, and more than half of the city’s territory is in a preservation area.

The controversial industrial project, estimated at R$ 5 billion, was proposed by Gastrading Comércio de Energia, and it would have generated up to 1.7 gigawatts of energy.

In January 2018 the Mayor of New York Bill de Blasio made two important announcements. The first one was that the city would divest its assets from fossil fuel companies.

The second one was that the city had filed a lawsuit in federal courts against the five fossil fuel companies identified as the most responsible for global warming: ExxonMobil, BP, Conoco Phillips, Shell and Chevron.

These announcements came after years of grassroots organizing and it was celebrated as a victory by the many citizen groups that had been mobilizing to push the city to take this decision.

The divestment movement in New York dates back years, driven among other things by the impacts that Hurricane Sandy had on New York and its citizens: more than 100 dead in New York and surrounding areas; an estimated damage of more than $40bn; 100,000 houses damaged of which 2,000 rendered uninhabitable.

The awareness that climate change had played a major role in creating the conditions for Hurricane Sandy to develop and grow in strength convinced many New Yorkers to hit the streets asking the city not to give a penny more to dirty energy.