The U.S. Food and Drug Administration (FDA) has extended the comment period to Nov. 22 for its proposed produce and preventive-control rules that are part of the Food Safety Modernization Act (FSMA).

The agency decided to extend the deadline because the web page where comments were being collected had bouts of being offline, out-of-service or not accepting comments. Many members of the National Sustainable Agriculture Coalition (NSAC), for example, reported difficulty accessing the comments website. 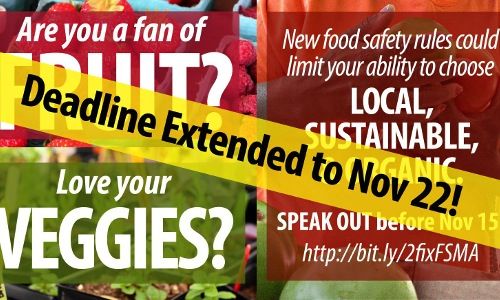 Despite these problems, the federal government has received more than 11,500 comments on the produce rule and more than 5,240 on preventive controls for processing foods, Food Safety News reported.

“The extension is good news,” organic grower Anne Schwartz, owner of Blue Heron Farm in northwest Washington state, told Food Safety News. “It was difficult to navigate around the website, and there are a lot of confusing and complicated issues.”

Schwartz added that the extension will benefit mid-sized and smaller growers, who now have time to pay attention to the issue. “Unlike the larger farms, they don’t have any staff to work on this during the growing season,” she said.

These mid-sized and smaller growers have expressed concern about the new rules, saying the supply of organic, local produce will be greatly reduced and many small farms will go out of business if the FSMA goes into effect as currently written.

Small-scale growers say the food safety rules are designed with larger, more complex and tightly-coupled food systems in mind without regard to how they would impact smaller producers.

“FDA’s food safety regulations will impact the agricultural landscape for decades to come,” said Brian Snyder, executive director of NSAC member-organization Pennsylvania Association for Sustainable Agriculture and co-chair of NSAC’s Food System Integrity Committee. “At stake in these regulations is nothing less than the ability of family farmers and local food businesses to supply burgeoning consumer demand for fresh fruits and vegetables, as well as value-added products like artisan cheese and other preserved farm products.”

FSMA was signed into law in 2011 to preserve the safety of the U.S. food supply and was the largest overhaul in federal food safety regulation since 1938. The law introduced new regulations for produce farms and facilities that processed food for human consumption.

The rules are meant to prevent food-borne illnesses, which have affected one in six Americans a year over the last decade, by preventing or quickly identifying food-borne pathogens before they contaminate the food supply.

Information about the proposed regulations, who is affected, and what the top issues are, as well as instructions for how to submit comments to FDA are available at NSAC’s FSMA Action Center.