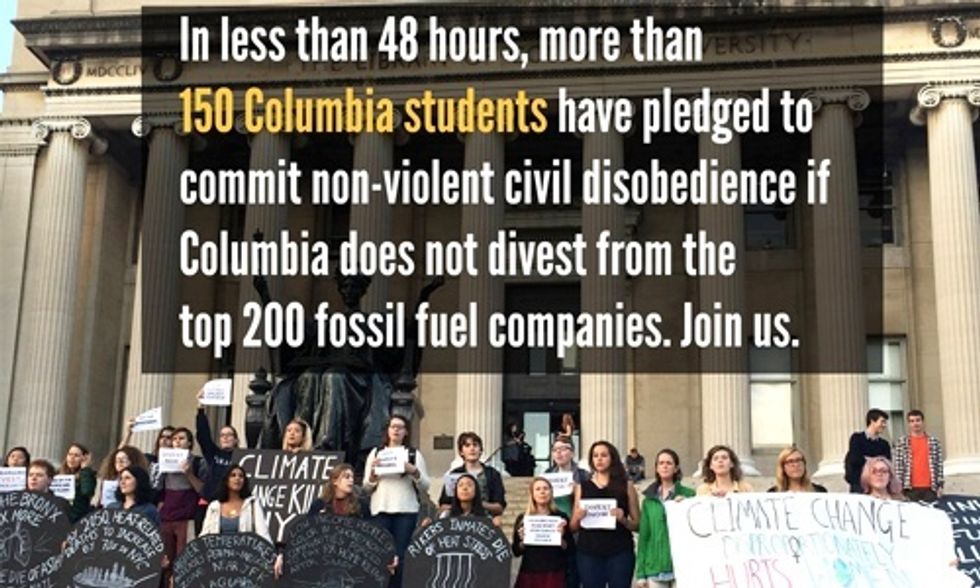 More than 150 students at Columbia University have pledged to engage in civil disobedience unless the university fully divests its $9.2 billion endowment from the top 200 publicly traded fossil fuel companies.

Posted by Columbia Divest for Climate Justice on Wednesday, October 14, 2015

The pledge, initiated by Columbia Divest for Climate Justice (CDCJ), assures students’ commitment to participate in nonviolent direct action—anything from hunger striking to sitting-in. As stated in the pledge, these commitments express intention “to protest Columbia University profiting off of and therefore condoning, a business model that endangers public health, exacerbates climatic and political instability and disproportionately harms people of color and low-income communities around the world.”

For nearly four years, CDCJ has been calling on Columbia’s Board of Trustees and President, Lee Bollinger, to stand on the right side of history and divest—but the board and its subcommittee on socially responsible investing have failed to listen to the demands of the student body. CDCJ’s pledge is an effort to break through this administrative deadlock and to demonstrate students’ commitment to escalation if the university does not divest soon. It is inspired by a similar pledge launched last week by Fossil Free Stanford.

CDCJ’s ask—for Columbia to freeze new fossil fuel investments and to fully divest its direct and indirect holdings from the top 200 oil, gas and coal companies, which hold the majority of the world’s proven fossil fuel reserves—has already been endorsed by more than 1,600 student petition signatures and 340 faculty members.

Climate change kills 400,000 people every year, and Columbia profits off this climate violence. Today we stood up to say no more. #DivestNow

Posted by Columbia Divest for Climate Justice on Wednesday, October 14, 2015

Within the first 48 hours of the pledge’s release, more than 100 students signed on.

“The fact that so many students are willing to participate in civil disobedience is a telling sign that students both care about climate justice and are ready for Columbia to take bold action on climate issues,” said Iliana Salazar-Dodge, a Columbia senior and organizer with CDCJ. “Students realize that Columbia is profiting off of the devastation of vulnerable communities. Responses to this pledge indicate that students are tired of being ignored and silenced. Columbia has the choice to wait and follow in other institutions or be a leader in the climate movement.”

The socially responsible investment committee is scheduled to meet in November and the trustees have their next meeting in early December, during the COP-21 climate talk in Paris. CDCJ organizers will continue to put pressure on administrators with the intent of accelerating the decision-making process.

“The risk of civil disobedience is nothing compared to the risk that climate change poses to front-line communities around the globe,” said Charles Harper, a Columbia engineering sophomore and new member of CDCJ. “Unless we take a stand now, we will lock-in irreversible warming and climate chaos for generations to come.”