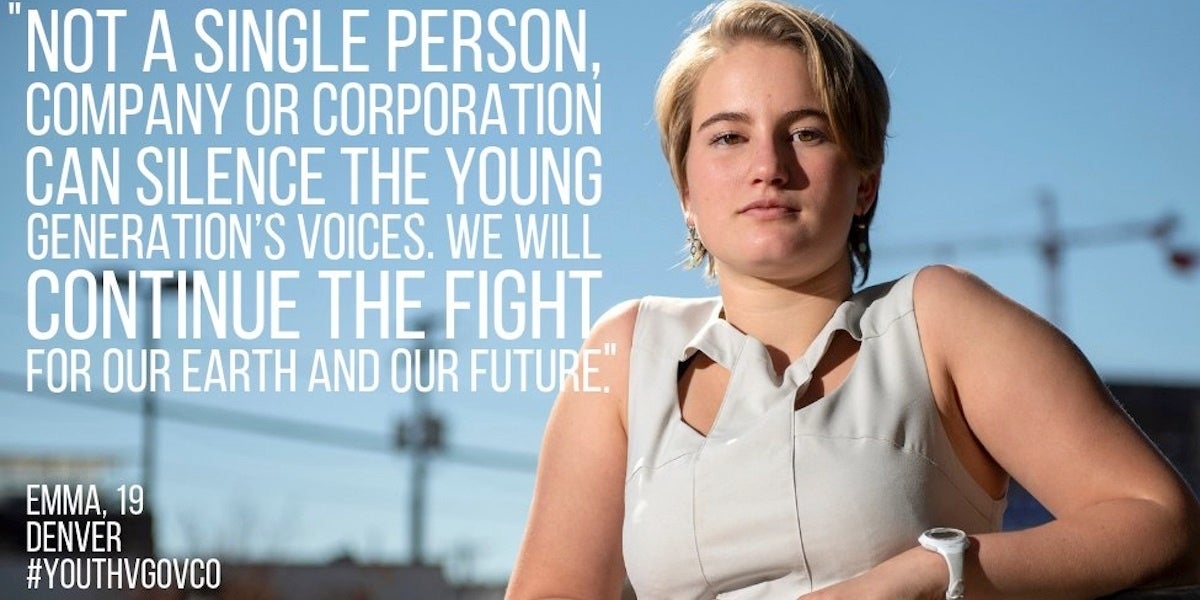 Colorado’s
oil and gas industry breathed a sigh of relief on Monday after the state’s highest court overturned a lower court decision that said state regulators must consider public health and the environment in permitting oil and gas production.

The unanimous ruling was a disappointment for the teenage plaintiffs, including high-profile climate activist
Xiuhtezcatl Martinez, who led the closely watched lawsuit against the Colorado Oil and Gas Conservation Commission (COGCC).

“To know that the judges in the highest court of my state believe that the interests of the oil and gas industry come before the public health, safety and welfare of my fellow Coloradans is shameful,” the 18-year-old from Boulder said in a
press release.

“But,” Martinez added, “I want you all to know that this fight for climate justice is far from over. My fellow plaintiffs, youth around the world, and I will continue to stand up for our right to a healthy future.”

The lawsuit—backed by Our Children’s Trust, the same non-profit supporting the young plaintiffs in the landmark federal lawsuit Juliana v. United States—was originally filed in November 2013 on behalf of seven young Coloradans who are all members of the Boulder-based youth group Earth Guardians.

They demanded that the COGCC refuse oil and gas development permits “unless the best available science demonstrates, and an independent, third-party organization confirms, that drilling can occur in a manner that does not cumulatively, with other actions, impair Colorado’s atmosphere, water, wildlife, and land resources, does not adversely impact human health, and does not contribute to
climate change.”

Ultimately, as
the Colorado Sun noted, the activists were hoping to stamp out Colorado’s oil and gas activities and prompt a “state-wide ban on fracking,” as then-13-year-old Martinez explained.

“[T]he pertinent provisions make clear that the Commission is required (1) to foster the development of oil and gas resources, protecting and enforcing the rights of owners and producers, and (2) in doing so, to prevent and mitigate significant adverse environmental impacts to the extent necessary to protect public health, safety, and welfare, but only after taking into consideration cost-effectiveness and technical feasibility.”

Basically, the ruling upholds the “Colorado way of doing business,” Dan Haley, president and CEO of the Colorado Oil and Gas Association, said as quoted by The Denver Post.

He added that under state law, the COGCC’s regulations for the oil and natural gas industry are the most extensive and stringent in the country.

For fracking opponents, it’s the law itself that’s the problem. Julia Olson, the executive director of Our Children’s Trust and co-counsel for the youth plaintiffs, stated that the Supreme Court’s interpretation of the state’s Oil and Gas Conservation Act makes it clear that the rule should be “amended or set aside as unconstitutional” as it allows “unfettered discretion to promote Colorado’s dangerous and pervasive oil and gas development at the expense of the people.”

Undeterred by the ruling, State House Speaker KC Becker said she will work to change Colorado law so the fossil fuel industry will do more to protect public health and the environment, as reported by Colorado Public Radio.

“It puts the decision back into the hands of lawmakers to take action and we are committed to addressing this concern this legislative session,” Becker also tweeted.

In an online statement, new Gov. Jared Polis—who wants to transition Colorado to 100 percent renewable energy by 2040—said he was “disappointed” by the court’s ruling.

He noted, “it only highlights the need to work with the Legislature and the Colorado Oil & Gas Conservation Commission to more safely develop our state’s natural resources and protect our citizens from harm.”

“The last couple years have proven that youth have the opportunity to be heard in the courts and the community. Not a single person, company or corporation can silence the young generation’s voices,” Emma Bray, 19-year-old plaintiff from Denver, said in a press release. “We will continue the fight for our Earth and our future, despite the mountains we need to climb and the setbacks that we will overcome. Regardless of the court’s decision in our case, the fight will continue.”