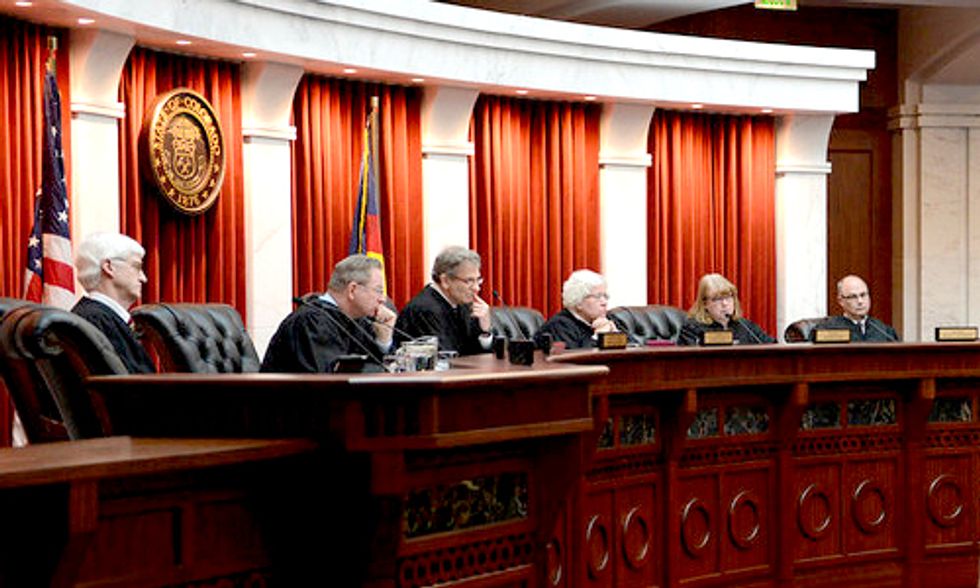 Today, the Colorado Supreme Court struck down the rights of Coloradans to protect their health, safety and wellbeing from fracking through the use of local bans. The justices denied residents their “right of enjoying and defending their lives and liberties; and of seeking and obtaining their safety and happiness" as outlined in the Colorado Constitution, by determining that oil and gas development is pre-empted by the state.

This decision overturns the democratically enacted measure to ban fracking passed overwhelmingly by Longmont residents in 2012 and strips all Coloradans of their Constitutional right to say “no" to fracking in their communities in order to prevent problems inherent in fracking, including air pollution, health complications, water contamination and reduced property values.

"It is beyond comprehension that the Colorado Supreme Court still fails to recognize the rights of people to live in a safe and healthy environment," Kaye Fissinger, president of Our Longmont, said. "The state has declared that fostering oil and gas development is in its interest. That the court apparently equates a government interest superior to human rights is a severe slap in the face. Our country's founding fathers are most certainly turning over in their graves."

In 2012, residents in Longmont passed a city charter amendment, Measure 300, which banned fracking and the disposal of its waste products, including injection wells within city limits, to protect homes, schools and public parks. The local ban passed with an overwhelming 60 percent majority despite being outspent 30-1 by the oil and gas industry. Gov. Hickenlooper and the oil and gas industry sued Longmont over this democratically enacted measure.

“Today's decision deals a devastating blow not just to Longmont residents, but to all Coloradans who have been stripped of a democratic process that should allow us the right to protect our health, safety and property from the impacts of this dangerous industrial activity," Lauren Petrie, Rocky Mountain region director with Food & Water Watch, said.

“Straight out of Orwell's Animal Farm, the Colorado Supreme Court just decided that the oil and gas industry is 'more equal' than other industries," Earthworks energy program director Bruce Baizel said. “Turning democracy on its head, today's ruling prohibits local communities from deciding whether and how to balance their health against the fracking industry's profits."

Physicians, Scientists & Engineers for Healthy Energy conducted an analysis of peer-reviewed studies on the impacts of fracking and shale gas development. It found that 21 of 25 papers published on the health impacts show potential risks or actual adverse outcomes, including increased incidence of cancer and birth defects associated with living in close proximity to oil and gas wells. The group's survey also showed that 33 of 48 water quality studies find either the potential for, a positive association with or direct evidence of water contamination. In addition, 30 of 34 focused on air quality found elevated levels of air pollution and that children are especially vulnerable to exposure to such pollution, according to the scientists.

As these inherent harms of fracking become ever-clearer, Gov. Hickenlooper's failed task force—formed in 2014 as a way to keep several anti-fracking measures off the ballot—has left municipalities frustrated as proposals to drill continue to encroach closer to homes and schools. In Adams County, a recent proposal to drill several new mega-facilities could place fracking wells within 100 feet from homes and a middle school. The governor's task force has failed to provide Coloradans with a way to protect their homes, families and futures from this dangerous, industrial activity.

“As a retired RN I am horrified that we continue to allow this toxic industry to operate next to our homes and schools," Karen Dike of the Sierra Club Rocky Mountain Chapter said. “The Colorado Supreme Court ruling discounts the inherent rights of the people of this state to have clean air to breath, fresh water to drink, land free of contamination and safe places to live, go to school and work. The ruling places profit of corporations before people and will allow the continuing toxic onslaught of this dangerous industry."