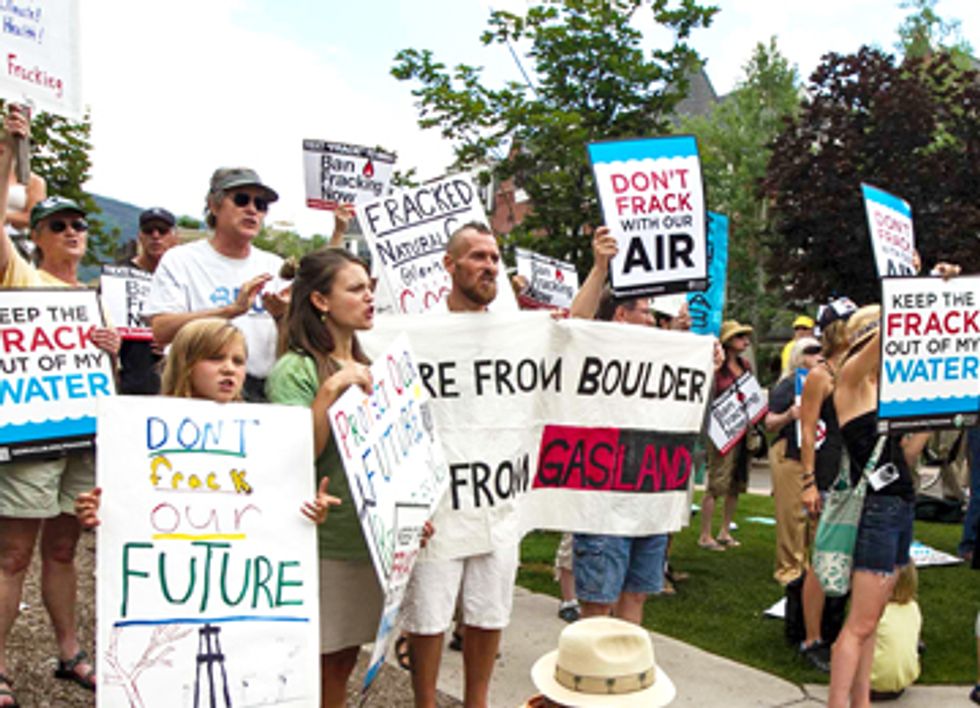 Hundreds of Coloradans from across the state gathered outside the Democratic Governors Association (DGA) meeting on Saturday at the St. Regis Resort in Aspen, CO, to tell Gov. Hickenlooper and other governors from across the country to say no to fracking and yes to a renewable energy future. The demonstration outside the DGA’s “Summer Policy Conference” was organized by Protect Our Colorado, a statewide coalition dedicated to protecting Colorado from fracking, and allies. The groups sought to ensure that these important state leaders and presidential hopefuls know that support for horizontal drilling and hydraulic fracturing, also known as fracking, is unpopular with voters and to urge them to chart a course for a renewable energy future.

“Fracking is proving to be an unacceptable risk to our families’ health and safety, water, air and climate,” said 350 Colorado Director Micah Parkin. “Research is increasingly showing this technology to be unsafe—using hundreds of chemicals known to be toxic, carcinogenic and endocrine-disrupting, permanently polluting groundwater and leaking methane at a rate that is significantly exacerbating the climate crisis. We believe that our leaders should use the precautionary principle and put a moratorium on fracking until it can be proven safe and allow communities to ban it without fear of lawsuits.”

More than a dozen organizations, representing tens of thousands of members in Colorado and hundreds of thousands from across the U.S., have joined in solidarity with the groundswell of citizens nationwide speaking out against fracking (hydraulic fracturing and all the hazardous activities it entails, including wastewater disposal and unconventional drilling techniques). Group leaders said the growth of this movement clearly indicates that this will be a deciding issue in the race for the White House, which many of the governors attending the DGA are likely eyeing.

In Colorado alone, dozens of local governments in the last year have considered bans or moratoria to safeguard their residents’ property values, health, safety and environment from fracking. This opposition has bridged political divisions and geographic areas of the state. From the Western Slope to the Front Range, communities are demanding moratoria or bans on fracking and calling for renewable energy.

"Governor Hickenlooper has ignored, discredited and sued Coloradans who are working to protect their health, safety, families and property from fracking,” said Sam Schabacher with Food & Water Watch. ”With his most recent suit to overturn a democratic vote to prohibit fracking next to homes and schools in Longmont, we have seen that he is squarely on the side of the oil and gas industry—not the millions of Coloradans who cherish our state."

Citizens of Longmont voted overwhelmingly last November to prohibit fracking next to homes, schools and a public reservoir. They did so despite threats from Gov. Hickenlooper to sue their community if the measure passed and hundreds of thousands of dollars spent by the oil and gas industry on campaign advertising that local activists said was aimed to sow fear.

Longmont is not alone. Citizens in Fort Collins, Broomfield, Lafayette, Loveland and dozens of other communities are also launching attempts to stop fracking, such as local ballot initiatives for fracking moratoria and bans.

What accounts for this proliferation of citizen involvement in fracking? Participants said that Coloradans have been left with no recourse as Gov. Hickenlooper has ignored citizens concerns, served as a spokesman for the oil and gas industry and threatened lawsuits against local governments that consider modest steps to prevent fracking near homes and schools. They assert that both federal and state regulations of the industry are proving dismally ineffective, with the oil and gas industry exempt from major provisions of seven federal environmental laws including the Clean Water Act and Clean Air Act (due, in part, to what is referred to as the “Halliburton Loophole” in the 2005 Energy Policy Act, promoted by former Vice President Dick Cheney), and the Colorado Oil and Gas Conservation Commission currently retaining only 17 inspectors responsible for over 50,000 active wells in the state.

"At this crossroads moment for Colorado we are calling on Governor Hickenlooper to direct us toward an energy future that doesn't risk our health or vital water resources,” said Allison Wolff, co-founder of Frack Free Colorado. “Billions of dollars are being spent on infrastructure to export fracked gas, while experts agree that clean, renewable energy solutions could meet 100 percent our power needs today."

In addition to protesters with signs and banners reading “Good Governors Don’t Frack Their People,” “Natural Gas Cooks the Climate,” “Don’t Frack Our Future” and “Renewables Now”, the action also featured the Earth Guardians youth group who acted as “Mile High Oil and Gas Association” in a satirical public theater piece performed during the protest. The youth posed as various humorously-named oil and gas companies under a banner that read “Good enough for the Governor. Good enough for you.” and held a mock “fracking fluid” expo, with a very convincing “Guv. Hicknlooper” taste-testing the youth’s various pretend fracking fluid cool-aid formulas and learning from the youth about the dangers of fracking.

“Fracking is endangering our chance of inheriting a habitable planet,” said Xiuhtezcatl Roske-Martinez, a 13-year-old leader of the Earth Guardians. “The facts are right before your eyes, and it has been proven again and again that there is no safe fracking,” said Roske-Martinez. “The decisions, Mr. Hickenlooper, that you and the other Governors make today will determine the kind of Colorado that children will be left with tomorrow.”