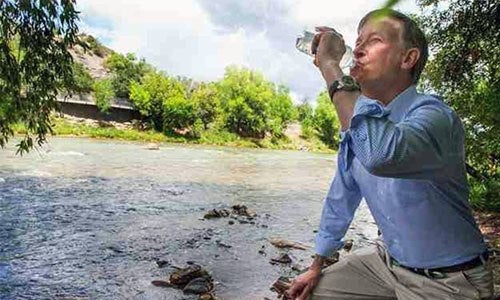 Colorado Gov. John Hickenlooper was at the Animas River in Durango, Colorado yesterday, dealing with the ongoing chaos of the acid-mine pollution caused by the U.S. Environmental Protection Agency’s (EPA) mistake at the Gold Strike Mine that turned the river a ghoulish orange-yellow color. Gov. Hickenlooper—always a media showboat—decided he was going to drink water out of the Animas River to prove a point that it was safe and as reported by the Durango Herald newspaper he did just that.

The Durango Herald also reported that Gov.Hickenlooper used an iodine tablet in the river water to kill bacteria. However, as a river advocate in Colorado, I would like to assert that Colorado’s rivers and streams are a dangerous concoction of pollution including waste from livestock, wildlife, human sewage treatment plants as well as acid-mine drainage and other nasty toxins and so the Governor’s behavior—while very media worthy—should not be repeated by the public. As the story reports, the EPA so far refuses to “open” the river to public recreation and rightly so. Acid mine drainage can be invisible as can many pollutants in our nation’s lakes, rivers and streams.

Gov. Hickenlooper became famous in 2011 for telling a U.S. Senate Subcommittee that he drank Halliburton’s “green” fracking fluid, a behavior that got him the nickname, “Frackenlooper.”

Acid mine drainage is very serious, as are many of the serious health consequences of ingesting water out of rivers and streams in Colorado and across the nation. Gov. Hickenlooper is famous for making Colorado “open for business,” but I highly encourage the public not to make your intestinal tract “open for business” by mimicking the Governor’s behavior. Wait for the EPA and public health officials to open the river for recreation and then get out on the water again. But don’t drink the water!