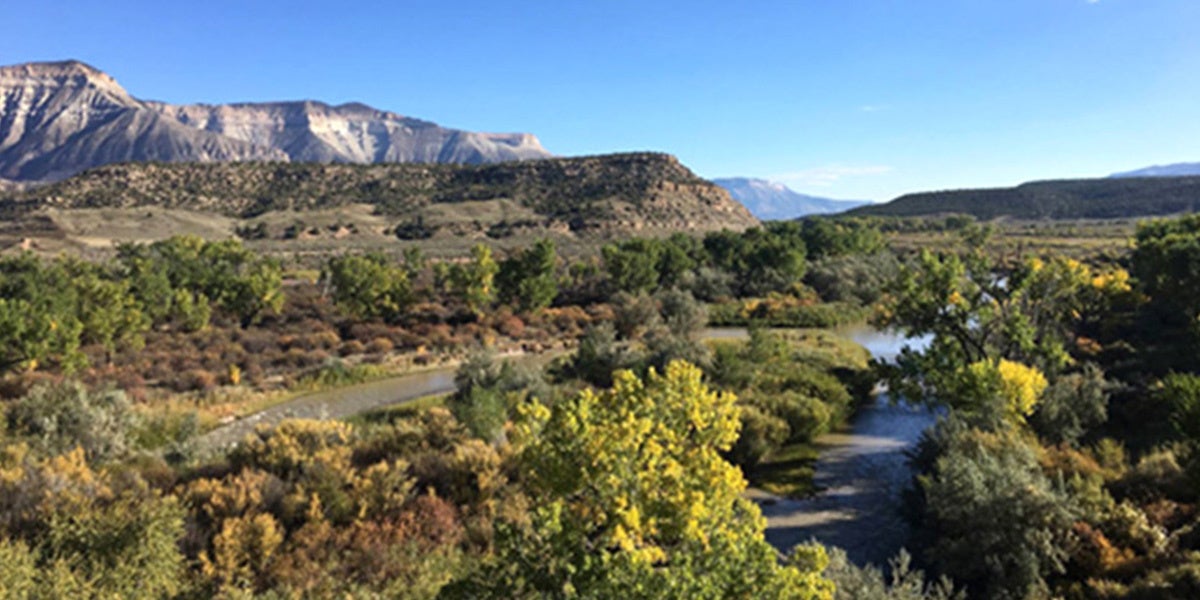 Conservation groups on Thursday sued Interior Secretary Ryan Zinke and the Bureau of Land Management for approving new leases to allow fracking on more than 45,000 acres in western Colorado, including within communities and within a half-mile of a K-12 public school, without analyzing or disclosing environmental and public health threats as required by federal law.

“Fracking is a filthy, dangerous business, and dodging environmental analysis puts people and public lands at risk,” said Diana Dascalu-Joffe, a senior attorney at the Center for Biological Diversity. “The Trump administration is trying to ignore science, public health and climate change threats to enrich corporate polluters, but it can’t shrug off the law.”

The lawsuit, filed in U.S. District Court in Denver, challenges leases in and around the towns of De Beque, Molina and Mesa on the western slope of the Rocky Mountains. Fracking would be allowed near three state parks—James M. Robb-Colorado River, Vega and Highline, a migratory bird hot spot and the site of the “18 Hours of Fruita” mountain bike race. Leases also have been offered within a half-mile of a K-12 public school in De Beque and beneath Vega Reservoir, important for wildlife, recreation, irrigation and hydroelectric power.

“Not only did the Bureau of Land Management move forward with these lease sales without looking at the climate effects of fracking, the agency also failed to examine its likely public health risks,” said Kyle Tisdel with the Western Environmental Law Center. “In addition, the agency failed to analyze or acknowledge the enormous water depletion drilling will impose on the Colorado River, already in low-flow conditions. BLM is simply drilling in the dark on these lease sales.”

These areas would face toxic air pollution, industrialization and potential spills and groundwater contamination from fracking operations. The BLM is using a shortcut called a “determination of NEPA adequacy” to bypass analysis of fracking harms required under the National Environmental Policy Act. This cursory review, used with increasing frequency under the Trump administration, presumes that leasing complies with broad resource-management plans and delays site-specific review until drilling permits are requested, thereby ignoring NEPA’s requirement to disclose impacts at the earliest possible time. The BLM routinely bypasses that promised review at the drilling stage and says that it can’t block drilling once land has been leased to industry.

“BLM has reverted to a lease before you look policy that marginalizes the public, ignores environmental impacts, and violates the law—all for the benefit of oil and gas companies,” said Wilderness Workshop‘s Peter Hart. “We asked BLM to consider the impacts of these decisions and our requests were denied. Now we’re asking a federal court to order the agency to comply with its legal obligations.”

“Once again, Ryan Zinke’s efforts to please corporate polluters are leaving American communities to suffer the consequences,” said Sierra Club associate attorney Marta Darby. “Zinke wants to limit public input and hide the environmental and public health threats of this huge expansion of fracking in Colorado, but he is not above the law. We will continue to fight to ensure our communities are protected from the dangers of fracking.”

The areas to be fracked include habitat for rare wildlife like peregrine falcon, spotted leopard lizard and burrowing owl. It also includes critical habitat for threatened and endangered species, including the Colorado pikeminnow and two flowers, the Parachute beardtongue and DeBeque phacelia. Fracking, which can use more than 20 million gallons of water per well, would threaten the pikeminnow and the Colorado River with spills and water depletions at a time when climate-driven drought is already reducing river flows throughout the Colorado River Basin.

“The water of the Colorado River Basin is essential for the 40 million people relying it. The system is already strained from climate change and overuse,” said Sarah Stock, program director with Living Rivers Colorado Riverkeeper. “The last thing we need right now is to add more water hungry, polluting industry without the proper regulatory framework or public process in place to protect this priceless resource.”

The administration’s oil and gas leasing shell game is consistent with Trump’s new “energy dominance” edict and policies directing the BLM to avoid NEPA analysis by prioritizing the use of DNAs when issuing oil and gas leases. The policy also limits or removes public notice and gives the public only 10 days to raise concerns.

Dascalu-Joffe and Kyle Tisdel of the Western Environmental Law Center are representing the Center for Biological Diversity, Wilderness Workshop, Living Rivers Colorado Riverkeeper and Sierra Club in the lawsuit.