‘Don’t Let BIG $ Rig Our Democracy’: Vote No on Amendment 71 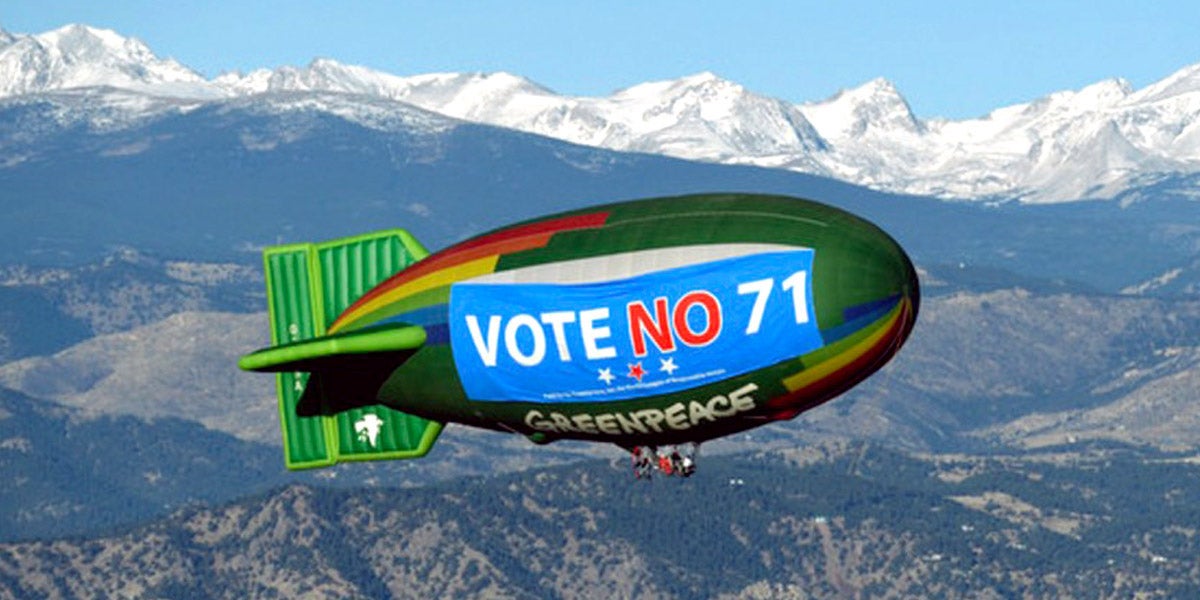 Greenpeace flew its thermal airship this morning over the Denver and Boulder area urging Coloradans to vote no on Amendment 71 or “Raise the Bar,” which benefits wealthy interests while shutting those without significant funds out of the ballot initiative process. “Raise the Bar” is largely funded and promoted by the oil and gas industry and is opposed by a broad and unlikely coalition. 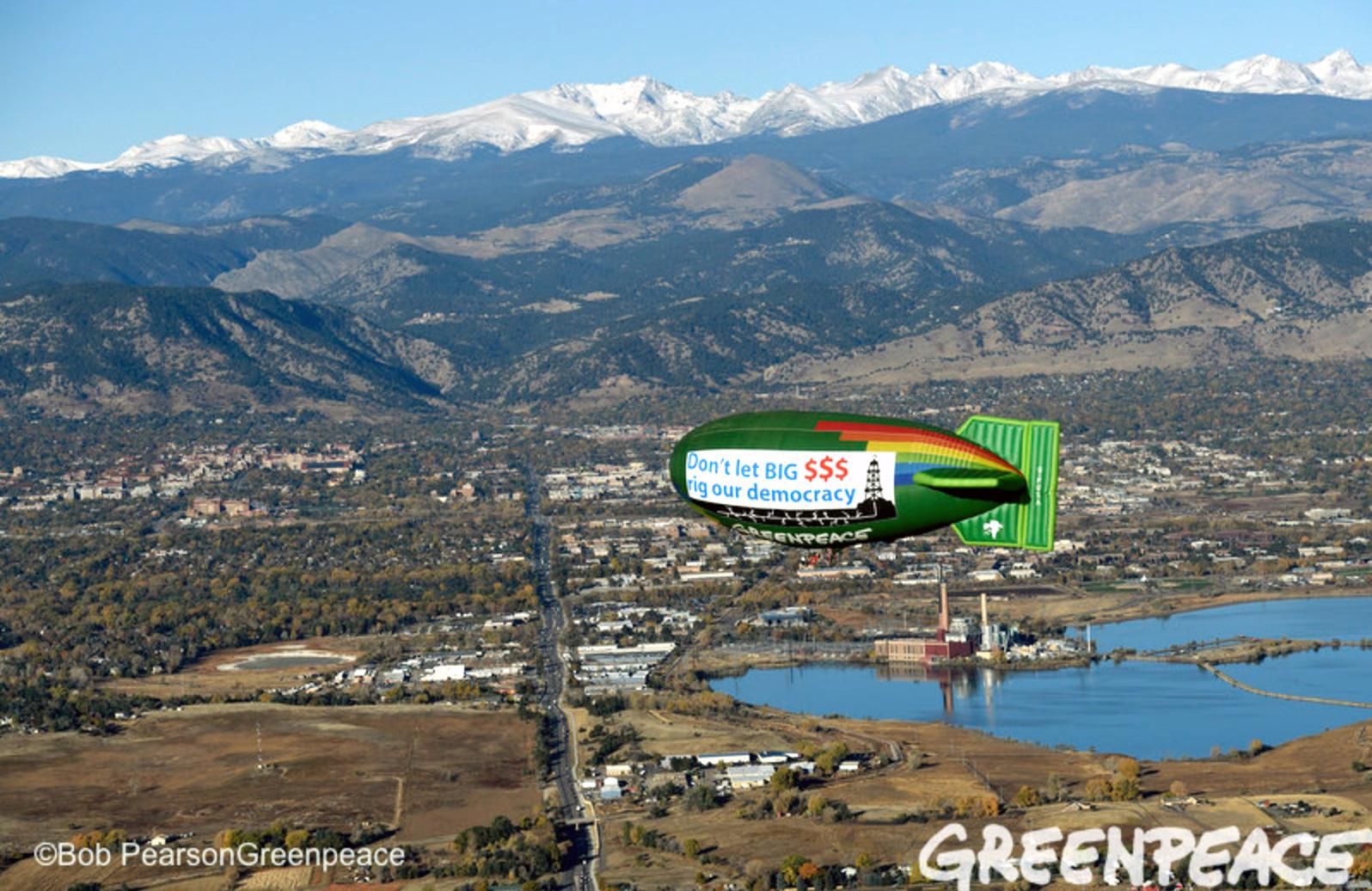 The Greenpeace Thermal Airship A.E. Bates takes to the skies over Boulder on Oct. 20 urging Coloradans to Vote No Initiative 71 or Raise the Bar, which would place a cumbersome burden on citizens wishing to participate in the ballot initiative process. Bob Pearson / Greenpeace

The airship messages read “Vote no 71” on one side and “Don’t let BIG $ rig our democracy” on the other.

“Big corporations and industries hungry for more political power are trying to rig our democracy. If Amendment 71 passes, it will become much more difficult for everyday Coloradans to put forward ballot initiatives on everything from education to healthcare to protecting the natural beauty of our state,” said Diana Best, a Denver-based senior campaigner for Greenpeace USA’s Climate and Energy team.

“The oil and gas industry and other wealthy interests, who are bankrolling Amendment 71, are hoping to take people’s voices out of our democracy, but Coloradans won’t easily be silenced.”

Amendment 71 would change the way Colorado’s ballot process has functioned for the last 100 years, requiring 2 percent approval in each of the 35 state Senate districts for an initiative to qualify for the ballot and raising the minimum voter approval to 55 percent of votes cast. The Denver Post, which has come out in opposition to 71, estimates that it takes about $1 million for an initiative to make it on the Colorado ballot. “Raise the Bar” would increase that amount significantly, creating a barrier to entry that keeps most Coloradans shut out of the process. 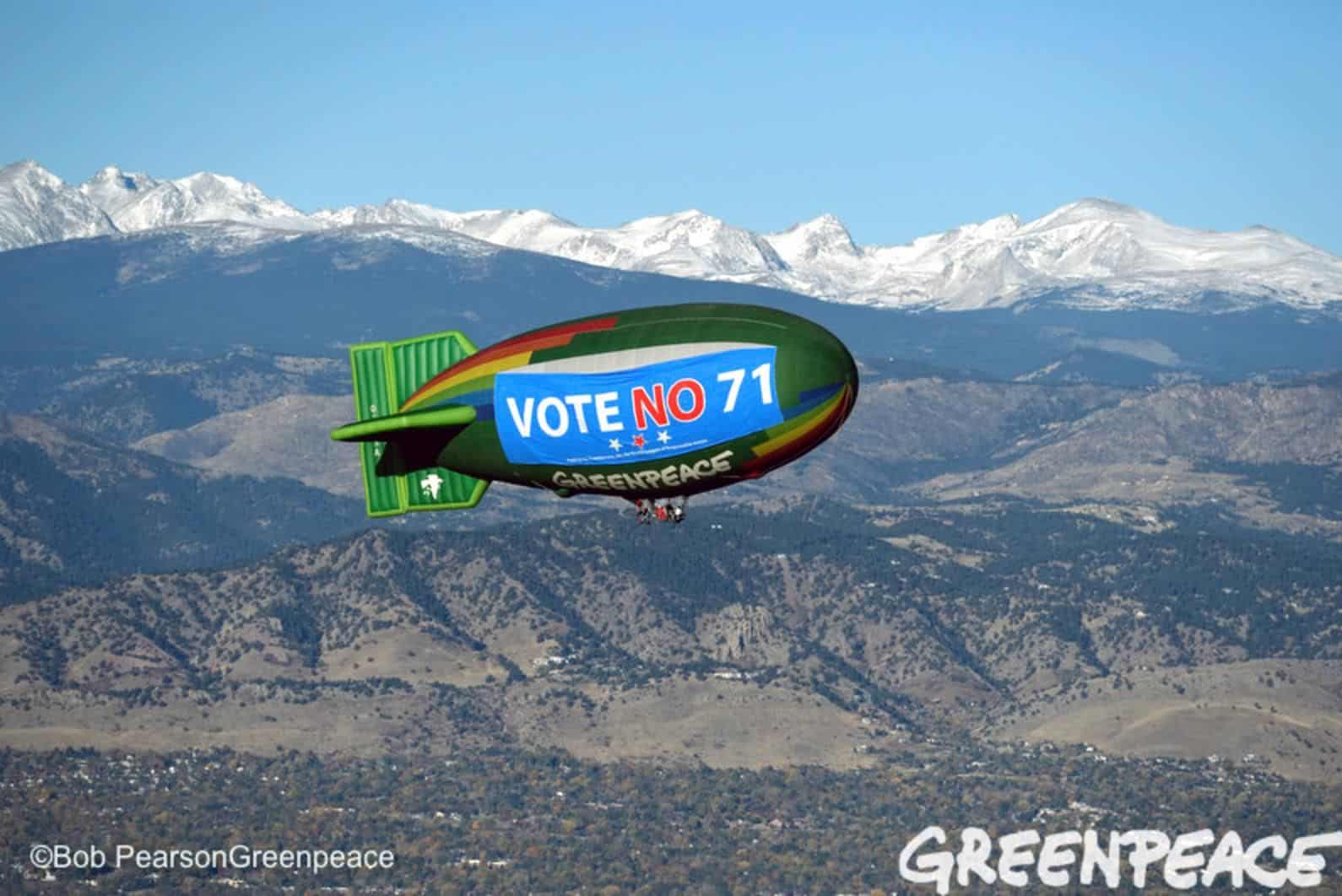 The airship messages read “Vote no 71” on one side and “Don’t let BIG $ rig our democracy” on the other.Bob Pearson / Greenpeace

“Colorado voters have seen how big money can drown out of the voices of the people in the political process,” said Common Cause Colorado Executive Director Elena Nunez.

“When that happens, the ballot initiative process is an opportunity for the people to address important issues. We should be making it easier for people to have their voices heard, not putting the constitution off limits to all but the wealthiest special interests.”

Amendment 71 was written by Vital for Colorado, a front group for the oil and gas industry with ties to the billionaire Koch Brothers, Americans for Prosperity, Anadarko Petroleum Corporation, Noble Energy and the Colorado Oil and Gas Association.

Greenpeace’s 135-foot long thermal airship, named the “A.E. Bates” in honor of a dedicated volunteer, is one of the only aircraft of its kind in the U.S. The airship will continue to fly with this message throughout the next week in Denver, Boulder and Fort Collins, weather permitting.