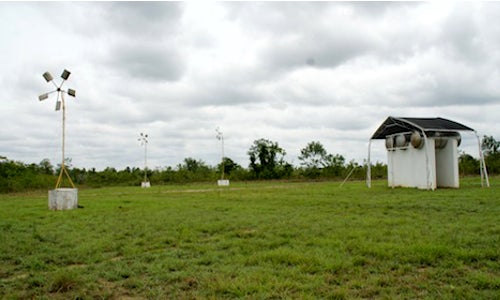 The plains of eastern Colombia are a tough land—the haunt of drug trafficking, guerilla warfare, and paramilitary groups; a place where the soil is so poor everyone said nothing could grow. Paolo Lugari, the founder of the 200-person community of Gaviotas, believed otherwise. In the face of adversity, he built a thriving, self-sustaining community.

Forty years ago, Lugari visited this bleak, barren land, written off by agronomists as the equivalent of a tropical desert, and decided he would make a community that would be not only habitable, but also prolific and sustainable.

Lugari brought a group of engineers, dreamers, street kids, and local Guahibo Indians together to come up with technologies to help them live sustainably in this desolate area of Colombia. And through trial and error, they succeeded. They manufacture their own solar hot water collectors, windmills, and an efficient water pump called a “sleeve pump.” They produce all their own electricity and food, and earn an income through sale of their renewable energy technologies, sustainable forest products, and pure water. 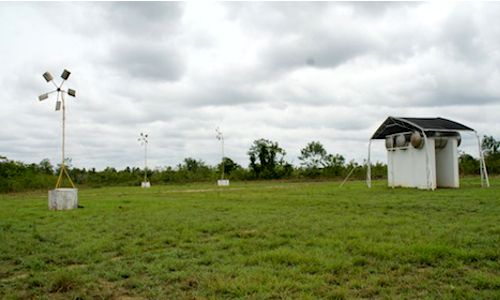 When asked how they achieved what some deemed impossible, Lugari says he approaches every challenge without any fixed ideas, and their philosophy of AVV, alli vamos viendo, which loosely translates into “just see what happens.”

Gaviotans manufactured solar hot water panels to produce hot water for the hospital in the community. Over the years they improved the design so the collectors are now extremely efficient, and bring hot water to people in the city, even in overcast, cloudy weather. Currently, more than 31,000 of the solar hot water collectors are in use throughout Colombia, including in Bogotá, a great example of technology being transferred from the rural areas to the city.

Every house in Gaviotas gets its electricity from the low-head micro-hydro plant, which produces between 15 and 20 kilowatts, with a one-meter drop. This is plenty of electricity for the low energy use of rural Colombian homes. Gaviotan-produced biodiesel runs all of the engines in the community, which in this carless community means tractors, work trucks, and electric generators.

They also discovered pure water only 40 meters below their soil. They decided to take advantage of thisby developing a water bottling plant, in recognition of a high rate gastrointestinal illness in the area from drinking water of poor quality. Needing to pump water from a depth of over 120 feet, they took ideas from Holland, Australia, Africa, and NASA, and designed a windmill that pumps thousands of gallons per day, even at a wind speed of under four mph. The windmills pump the water from the underground aquifer into a storage tank, where it is gravity fed to a bottling plant, and distributed free to local residents, in hopes of lowering the rate of gastrointestinal diseases. 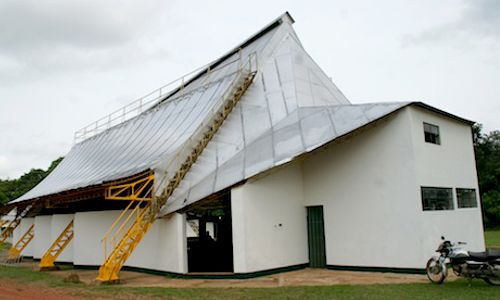 The Gaviotas philosophy of being as self-sufficient as possible and not using imported technology keeps solar PV mainly out of the picture, and the majority of the bottling plant is run on biodiesel and micro-hydro electricity. But some of the labs necessary to analyze the water run their equipment from a three kW PV system. To keep the plant cool, ventilation ducts run underground, capturing the wind from the northwest, and drawing it through the plant, where the air naturally vents out of the double-plated self-cooling roof. The roof is made of two sheets of corrugated metal, bonded together to create honey-combed air chambers.

Other buildings in Gaviotas showcase innovative architectural features as well. The multipurpose hall, which serves as the meeting place, church, conference center, and game room, sports a roof in the shape of a parabola, designed so that no matter where the sun’s rays are throughout the day, they are reflected off the roof, keeping the interior cooler than the humid, suffocating heat of the savannah. The walls of the hall, as with all the buildings in Gaviotas, are built out of brick-sized pressed blocks made from a mixture of native soil and a small amount of cement. These are hand-made in Gaviotas with a CINVA press, a manual press developed in Colombia and first tested in the community of Gaviotas. The thermal mass of the pressed blocks also aids in keeping the interior of the buildings and homes cool. 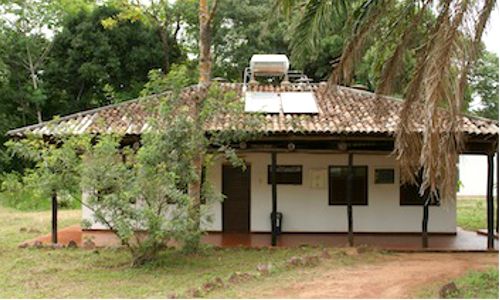 Turning a desert into a forest

While the renewable energy technologies developed in Gaviotas are impressive, Lugari believes that technology can only do so much. “Preserving and increasing biomass is the only thing that will save humanity,” according to Lugari. “There’s nothing more important than planting a tree.” And if anyone knows about planting trees, it’s the folks of Gaviotas.

Since the founding of the community they have planted 8 million trees on 20,000 acres, resulting in 10 percent more precipitation and numerous other unplanned economic benefits. How they got a forest to grow in a place where everyone said the soil was too poor to grow anything is due to a small fungus, mycorrhiza. According to Lugari, who believes that “life is more sustained by the things you don’t see,” this fungus is the smallest, yet most important, part of Gaviotas. Originally donated from Venezuela, this fungus that allows trees to absorb nutrients from the acidic soil, reproduces naturally in Gaviotas, allowing the forest to flourish. This is why Lugari is fond of saying, “there are no poor soils, only poor brains.”

The Gaviotans plant tropical pine trees, whose resin is their main income source. To plant so many trees in a relatively short amount of time, Gaviotan engineers designed an extremely efficient tree planter. Using parts and ideas from technology developed and used in Venezuela, the state of Georgia, and Gaviotas, they developed a double-row planter powered by local biodiesel. During planting season, they can plant one tree every three seconds, or 250 acres in a 24-hour period.

What Gaviotans are possibly most proud of is their way of harvesting the forest without cutting it down. A Gaviotan worker can tap 1,000 pine trees in a five-hour workday. The tapper clears a strip of bark and staples a bag below. One week later, another strip is cleared above the first one. And then a week later, a third strip. In one month, the bag is full of resin, which has become liquid gold for Gaviotas. After tapping a tree for eight years, they let it rest for a few years, and can begin to tap it again.

In their on-site resin factory they turn the resin into rosin (also known as colophony) and turpentine in the Gaviotas-designed distillery. The rosin gets used around the world in a plethora of products including paints, cosmetics, violin strings, and chewing gum. Next door the biofuel plant turns the turpentine, along with used cooking oil, into biodiesel, which not only runs all of the diesel engines in the community, but also powers the generators used to run the biofuel plant. Each year they produce 1,500 tons of rosin, 200 tons of turpentine, and 100 tons of biodiesel.

Although Gaviotas may seem to be a technophile’s dream, residents have no Internet. For a short time they did, powered by solar photovoltaic panels. Before Internet access, when the Gaviotans had problems they needed to solve, they thought amongst themselves, and came up with solutions relevant to their specific site and circumstances. Once the World Wide Web came, they turned to their computers to find solutions. After two years, they realized they were not making as much progress as before. “We returned all the Internet equipment and PV panels,” declares Lugari, “and Gaviotas returned to thinking.”

A self-sufficient community in one of the most difficult places in the world should be a model that the rest of the world learns from. However, Lugari likes to point out that Gaviotas is not a community that can be replicated. “What needs to be replicated is the Gaviotas way of thinking.” Gaviotas has grown and prospered by putting sustainability first and living their attitude of AVV (alli vamos viendo). “The only fixed idea in Gaviotas,” states Lugari, “is that nothing is done that is not sustainable in the final balance.”