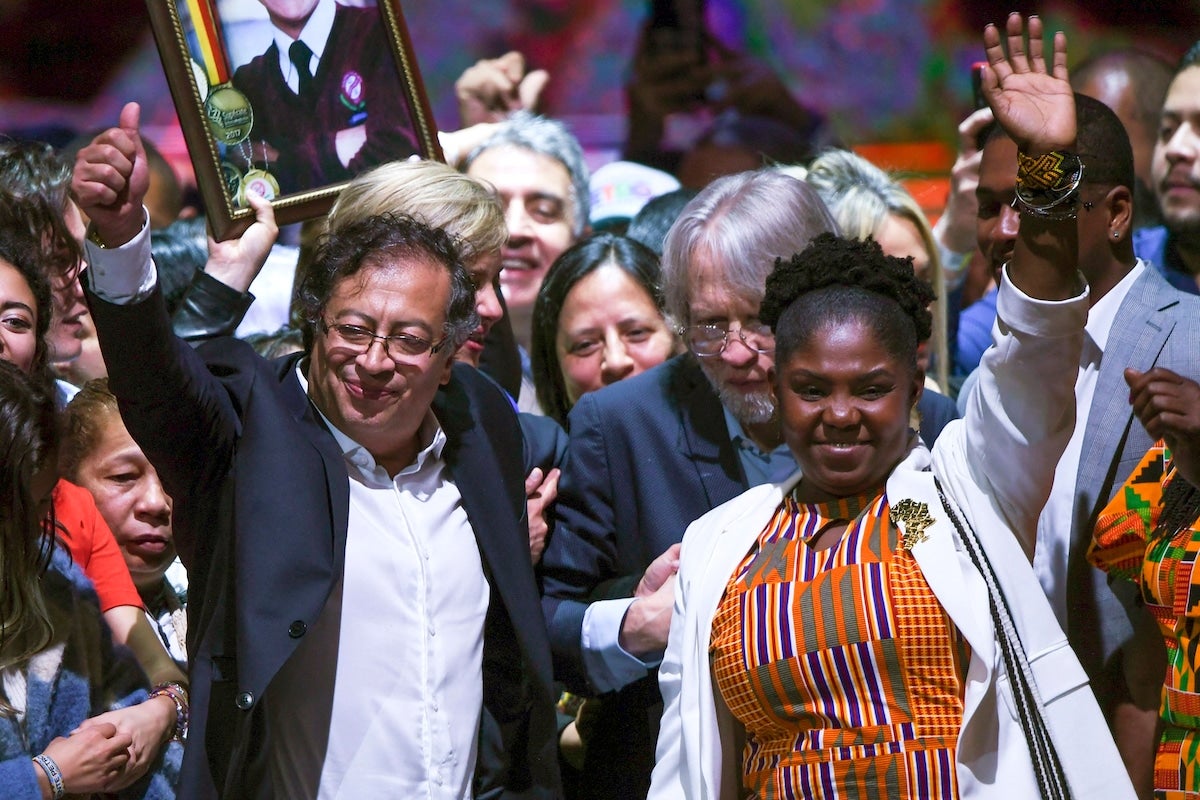 The results of Colombia’s latest election could be a major victory for the planet.

On Sunday night, the country voted in its first-ever leftist president, Gustavo Petro, and its first Black vice president, Francia Marquez, who is also a Goldman Environmental Prize winner, as Climate Home News reported. Included in the pair’s ambitious agenda is a commitment to ending new fossil fuel exploration and phasing out all fossil fuel use. If they succeed, Colombia could become the largest fossil fuel producing nation to abandon the energy sources largely responsible for the climate crisis.

“These are not baby steps but huge steps towards the transition and reducing fossil fuels,” Colombian environmentalist Martin Ramirez told Climate Home News.

In his manifesto, Petro promised to transition from an energy system based primarily on fossil fuels to one based on a variety of renewable sources. He also promised to incentivize the use of electric vehicles and to protect the Amazon rainforest as a crucial carbon sink.

“We will promote within Colombia’s foreign policy a great American front in the struggle against climate change, which includes saving the Amazon rainforest and restoring it as the great lungs of humanity,” the manifesto said.

It also said that the country would obtain financial credits for leaving the Amazon alone and for keeping fossil fuels in the ground.

Further, Petro has said that his government won’t look offshore for fossil fuels or develop fracking projects, according to Climate Home News.

Abandoning fossil fuels is part of a larger vision of moving away from, in Petro’s words, the “old extractive economy,” as The New York Times reported.

“The old coffee-growing country has been left behind and sadly we moved into oil and coal,” he told El Pais in 2021. “This is unsustainable and will bring about extinction. We need to move away from an extractivist economy and move towards a productive one.”

His platform also has many social justice components including making sure everyone has access to work and income, providing subsidies for single mothers and instituting universal health care, according to The New York Times. However, it might prove difficult for Petro to follow through on his promises.

“This is a program of very deep transformations,” Rosario University in Bogotá political science professor Yann Basset told The New York Times. “On all these issues he is going to need significant support from Congress, which promises to be quite difficult.”

According to the Colombian constitution, a president cannot seek reelection, so Petro only has one four-year term to accomplish his goals, Climate Home News explained. He faces opposition from a majority of the country’s lawmakers.

Still, if Petro does manage to enshrine his ban on new fossil fuel exploration into law and set a date for his fossil fuel phase out, then Colombia could join the Beyond Oil and Gas Alliance. This was established by countries that currently represent 0.2 percent of worldwide oil production at the COP26 climate conference in Glasgow in 2021. Colombia now represents around one percent of global fossil fuel production.

“Some of the most powerful examples of leadership when it comes to keeping fossil fuels in the ground are no longer coming from some of the European countries that created [the alliance],” Oil Change International campaigner Romain Ioualalen told Climate Home News. “It’s coming from a middle income country in Latin America.”

“This is an important moment for the ‘nobodies’ of this country who have never had a voice,” Marquez told reporters after she was selected as Petro’s running mate, as Al Jazeera reported. “This is a moment of racial justice, of gender justice, ecological justice – and a moment of social justice.”

Marquez’s support for the country’s “nobodies” is reciprocated. Some of the highest voter turnout in the election came from the poorest regions in the country, The New York Times reported.