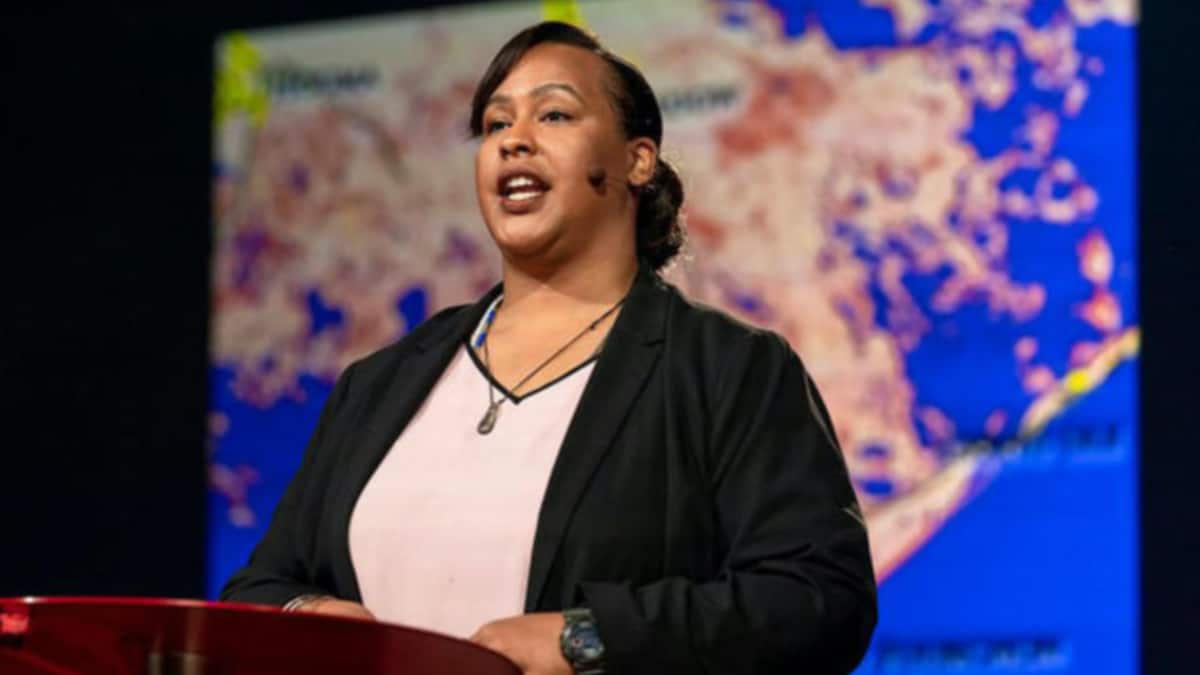 How did Hurricane Katrina—which displaced more than 1 million people in the Gulf region—propel your work, and how does it shape your mission today?

I got into this work in the aftermath of the hurricane in 2005, and it’s been 15 years as of August 29. Katrina was a massive disaster that I felt compelled to respond to. It was my hometown. I stayed because I began to understand how that disaster was a manifestation of a global climate reality.

We are anchoring the Movement for Black Lives work that’s centered around a national black climate agenda, and part of that will include in-depth communications to bring climate into the realm of Black lives—into communities that have been marginalized and targeted by our colonizing system. Part of our work is to begin a process of acknowledging the trauma that comes with being a person of color in this country, being in an environmental justice community and being poisoned every day, and going through a climate disaster. We are on the frontlines.

How do you help communities heal from this trauma when the underlying problems have not been solved?

The most difficult and time-consuming layer is building, healing, and strengthening relationships between different communities and acknowledging that many of us, especially people of color, have been systematically pitted against each other as part of a broader social infrastructure. What does it mean to reconcile these communities with each other? For example, we’re making a Sacred Waters Pilgrimage down the Mississippi River for Black and Indigenous women to address the tensions between those two communities in the U.S. and begin to heal those relationships. In the climate movement, these are the people who are tokenized; it’s just assumed they can stand on the frontlines together with no acknowledgment that there’s a deep history of mistrust and tension between these groups—not of their own creation, and rooted in colonization. You’ve got to take some time to understand how the cultures are different and how people are perceived. You’ve got to reconcile and heal before you can work, and only then can the work that you do together stand. Otherwise, the work that you do together will fall.

In addition to building coalitions, what kinds of services does the GCCLP provide to help residents cope with the impacts of extreme storms?

We started out providing free legal services to folks recovering after a disaster. We are there as service providers but we also offer a political education about what is happening to you and why. We don’t just get your FEMA paperwork completed for flood remittance, although that’s part of what we’ll do. You’re also going to leave with an understanding of the frequency of flooding, the climate impacts, and how your area in particular has just been affected and is going to be affected in the future.

Today, we have four main programs, and in each, we have a level of advocacy within them: We do Equitable Disaster Recovery; Water Equity/Water Economy; Sustainable Economy/Energy Democracy; and Land, Labor and Just Transition. Our federal disaster advocacy work centers around the modification and re-envisioning of the Stafford Act, which controls and activates FEMA. We also do some state-level advocacy around mitigation planning here in the five Gulf South states. That involves educating decision makers not just on what the community needs but pointing out what’s out there and within our budgetary reach or legislative duty.

A lot of the initial recovery work following Katrina centered around building climate-resilient communities that could withstand future storms. Has that work been successful?

Over the years, as we’ve watched people trying to create resilient communities that are more physically ready for the storms that are coming, we’ve seen it either lead to gentrification or segregation or investment in non-Black, non-Native places. Money never makes it to the frontline. So we’ve got to put in our own infrastructure systems at the community level, rooted in political education around economy, racialized capitalism, and wealth-building.

In our understanding of climate change, the economy plays a major (if not the major) role in how we got to this place. The economic philosophy of this country is one of extraction; it’s an extractive economy that started with the attempted genocide of Native Americans and the enslavement of Africans, all for profit, power, land, and control. So, we help communities to practice receiving, making decisions about, and distributing money to places where they want to see their dollars go—which is basically holding Black wealth. We help local organizations set up community-controlled funds all across the Gulf South region after every disaster. Yes, the community receives dollars, but they also go through a 12-month process to collectively develop a system of shared governance so that, should this happen again, we have systems of our own around our own money and its destination.

The practice of “blue-lining” is a new climate-driven threat that withdraws support for vulnerable communities living in high-risk flood areas. How did that manifest in New Orleans after Katrina, and how might it impact other areas?

It’s happening already in places south of New Orleans where decision makers have understood we will not make it. We’re going to lose those areas. My community is one. You watch as federal flood insurance becomes impossible because of the designations of flood risk by the Army Corps of Engineers. A point comes when you can’t even get flood insurance to protect your home. After Katrina, officials said, “Everything below Interstate 10 is pretty much written off so if you live below I-10, you should begin to plan to move.”

I think we’re going to see false information about flood lines. On flood maps of south Louisiana, the city of New Orleans is not shown in the flood zone because of the levee system, which was only rebuilt to the standards that failed the first time. As a result, people in New Orleans can get insurance but people south of New Orleans can’t.

How do you reach community members who are not already part of the climate conversation but face climate change impacts in their immediate futures?

Outreach is mainly folks just talking to the people they know. And we’re part of larger coalitions that help us build new relationships. The problem is that the climate conversation has not yet made it into the daily rhetoric of Black, Indigenous, and brown communities, so giving generic information is not good enough. We’re going to do more virtual education because video and social media are just how people get their information now in this COVID reality.

But the majority of folks we’re trying to reach do not sit on a computer all day so there’s still the problem of how to make it real. You have to understand that communication is not just words, especially down here in the South. You can sit under a tree next to somebody for a long time without words, yet a lot is actually being communicated, and they can feel that your energy is serious and authentic. I never had a problem communicating urgency to people of the Gulf South. They know I’m from here, that I love this place, and that I wouldn’t be taking their time talking like this if it weren’t serious.