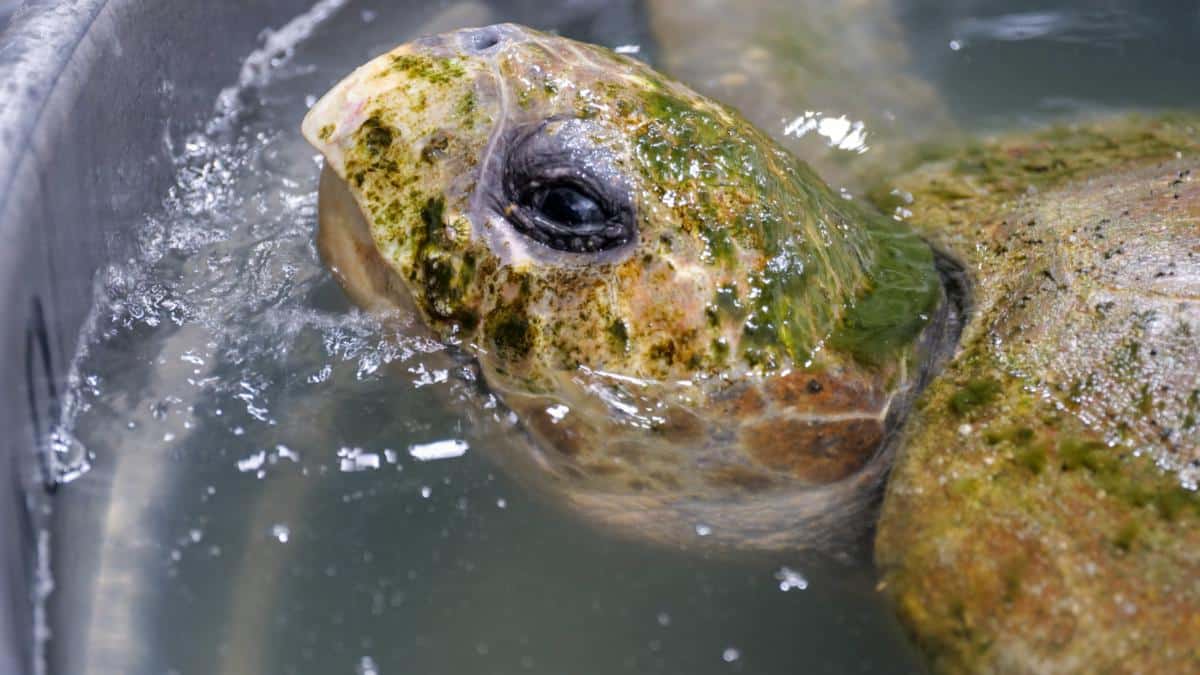 Hundreds of endangered sea turtles were stranded on beaches after suffering “cold stunning” in the waters off Cape Cod, Mass. Local rescuers and wildlife rehabilitators stabilized the turtles at the New England Aquarium (NEAQ) and National Marine Life Center and began treatment. Many of the sea turtles were transported by land or air to partner facilities around the Eastern Seaboard for longer-term care to make room for more incoming, cold-stunned animals.

“Cold stunning” is a hypothermic reaction that occurs when sea turtles are exposed to cold water for a prolonged time, explained Connie Merigo, NEAQ’s Director of the Sea Turtle Rescue and Rehabilitation Department. The dangerous condition typically develops in sea turtles when water temperatures reach 50 degrees F and cause the animals to stop eating and swimming, she said. They float, unable to eat or dive, exposed constantly to wind and waves. When winds shift onshore after storms, they work with surface currents and high tides to push stunned turtles onto the shore, where beach walkers find and rescue them.

“Sea turtles are ectothermic, meaning they take on the temperature of the water or air around them,” Bette Zirkelbach told EcoWatch. “They are not able to regulate their body temperature, so cold water temperatures become dangerous for these turtles. A lower body temperature slows the turtles’ heart rate and circulation, lowering oxygen levels and leading to severe lethargy. If left untreated, cold-stunning can progress to shock, pneumonia and even death.”

Zirkelbach is the manager at The Turtle Hospital in Marathon, Florida, a facility that received 40 critically endangered Kemp’s ridley sea turtles last week from NEAQ for longer-term care.

“When turtles are cold-stunned, they appear dead. There is no movement and very little reflex,” Merigo told EcoWatch. “Sometimes we need a Doppler and an ultrasound to even detect a heartbeat because a turtle’s heart slows so much when it is cold-stunned. It can slow to just three beats a minute even, but you can usually still save that turtle.” 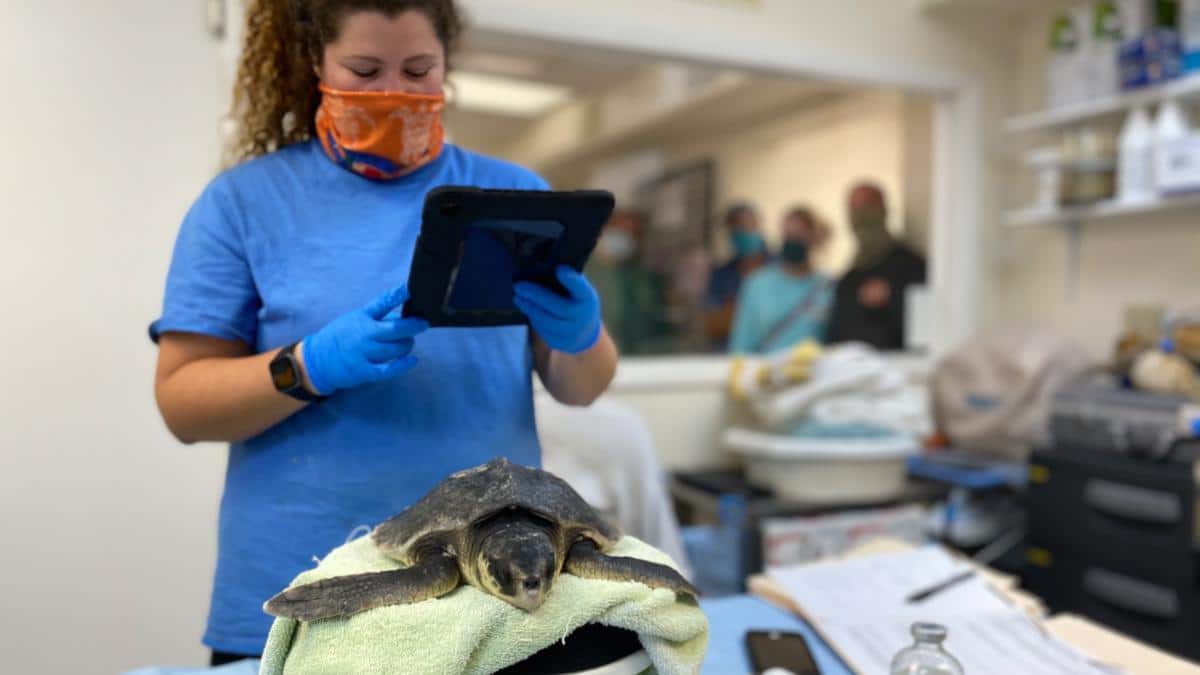 NEAQ and local rescuers begin seeing turtles every fall when water temperatures drop to that 50 degrees F threshold, and typically expect to find them into early January. After that, temperatures are so cold that any animals found are usually no longer alive.

“It is a lot of animals. They’re still coming in,” she told EcoWatch as she surveyed 39 rescued turtles that day and 20 the day prior. “So far, this is a huge year.”

At NEAQ, the turtles are gradually warmed up about five to 10 degrees F a day. More aggressive warming can cause serious damage and the turtle might not survive, Merigo said. Emergency treatments also include providing replacement fluids, balancing electrolytes and addressing pneumonia. Assessments take place for other serious problems too, such as shell or limb fractures, frostbite, emaciation and eye damage.

As local aquariums don’t have the capacity to care for all the injured turtles, a group of private pilots called “Turtles Fly Too” donated planes, fuel and time to transport some to various partner facilities around the country. Other turtles were driven to closer care facilities.

“We have a huge network of really great partners working with us, so if we can spread out the care, we can give better care to all the animals,” Merigo said.

The 40 Kemp’s ridley sea turtles recovering in The Turtle Hospital will continue to be treated and rehabilitated anywhere from 30 days to a year, depending on the severity of injuries, Zirkelbach said.

The turtle expert noted that while she’s treated cold-stunned turtles from the north before, the newest arrivals were the most cold-stunned Kemp’s ridleys ever received at one time.

The majority of cold-stunned animals are juvenile Kemp’s ridley sea turtles, estimated to be between one and five years old, Zirkelbach said. Merigo hypothesized that their smaller size contributes to cold-stunning sooner than other species, and are also washing up on beaches earlier.

Merigo noted that sea turtles are really resilient, making the entire rescue and rehabilitation program worth it. Once warm, fully rehabilitated and healthy, the turtles recovering at The Turtle Hospital will go to another part of Florida where juvenile Kemp’s ridley sea turtles will return to the ocean, Zirkelbach said.

“Sea turtles have a built-in GPS, so they will get back on track,” she assured.

Both experts noted a potential connection with the climate crisis, and a 2019 study found that warming seas increase cold-stunning events for Kemp’s ridley sea turtles in the northwestern Atlantic Ocean. Warmer global temperatures do not cause the cold-stunning, but could explain why the turtles are in the area in the first place. 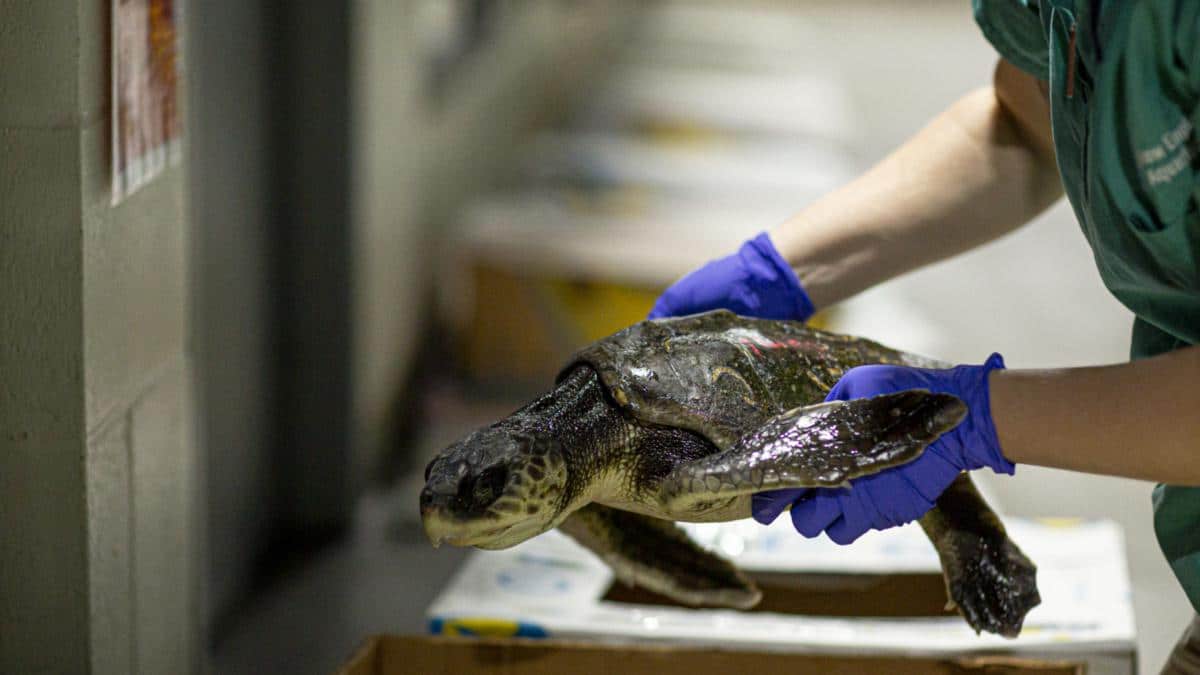 In the past decade, the Gulf of Maine, which spans from Cape Cod to Nova Scotia, has warmed 99 percent faster than the rest of the ocean, Zirkelbach said. The warm water encourages turtles that migrate north along the Gulf Stream in warmer months to stay in the bay longer.

“Turtles that fail to migrate south get stuck in the unique horseshoe-shaped topography of the Cape Cod peninsula, and when temperatures drop, the bay becomes a death trap,” she added.

Before ocean temperatures warmed, the waters of Maine were too cold for many of these sea turtles, Merigo echoed. Now, with warming sea surface temperatures, Maine can reach the high 70s to low 80s, which is “perfect turtle temperature,” she said. The potential for more turtles getting trapped in the bay and then cold-stunned is nerve-racking for Merigo.

In addition to shifting habitats as waters warm, warming global temperatures also disrupt natural gender balance in sea turtles, Merigo warned. Gender is determined by the temperature of eggs in nests, and as the planet warms, it will result in all females at some point, she said.

“The turtles we work with are all endangered and threatened,” Merigo said. “For sea turtles in general, the future is a little grim. Climate change is real; it does impact them.”