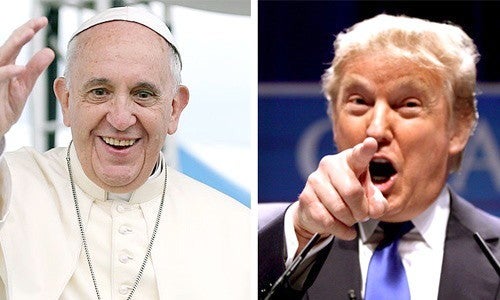 It’s the “big celebrity feud everyone is talking about,” Stephen Colbert told viewers of the Late Show with Stephen Colbert Thursday night. Donald Trump versus the Pope.

While in Mexico on Thursday, Pope Francis was asked about Donald Trump‘s plan to build a border wall. He said Trump “is not Christian” if he calls for the deportation of undocumented immigrants and pledges to build a wall between the U.S. and Mexico.

“A person who thinks only about building walls, wherever they may be located, and not building bridges, is not a Christian. This is not in the Gospel,” the Pope told journalists.

“No leader, especially a religious leader, should have the right to question another man’s religion or faith,” he said. Trump fumed that the Mexican government has “made many disparaging remarks about me to the Pope.”

“If and when the Vatican is attacked by ISIS, which as everyone knows is ISIS’s ultimate trophy, I can promise you that the Pope would have only wished and prayed that Donald Trump would have been president,” Trump said.

Pope Francis’ remarks of “building bridges,” not walls, echo his comments in the past on the topic of climate change. He has called for swift, global action on climate change, emphasizing how it disproportionately affects the world’s poor and vulnerable. In contrast, Donald Trump has repeatedly denied the existence of man-made global warming.

Colbert has a hilarious take on the feud and points out several things the Pope and Trump actually have in common.