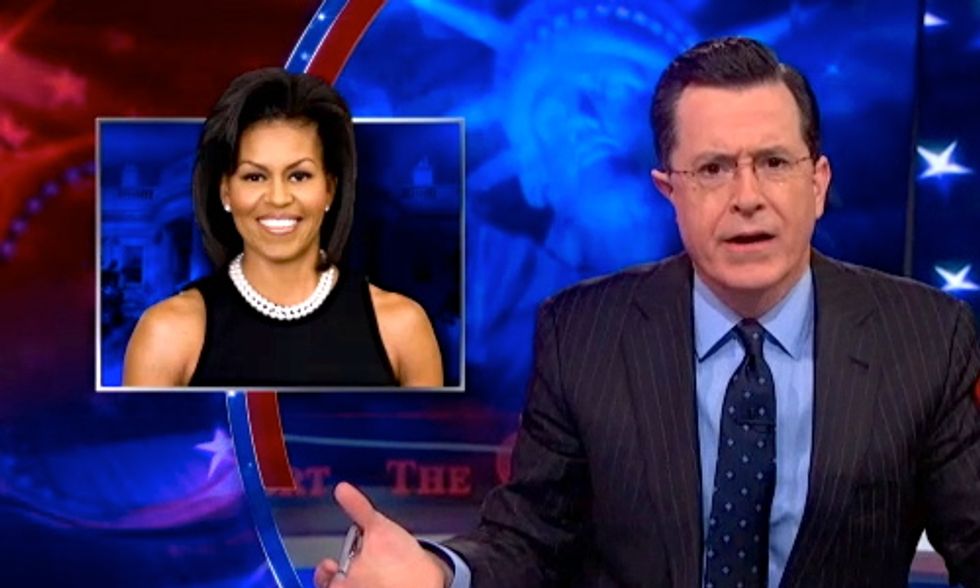 Colbert scoffed at the Journal of the American Medical Association (JAMA) study that determined obesity rates in children 2 to 5 years old have plummeted 40 percent—from 13.9 percent to 8.4 percent—and blamed Obama for her positive contributions saying, "I don't understand a First Lady accomplishing something. Everything they do is supposed to be a symbolic waste of time."

By the Numbers (Seriously)

The JAMA data came as particularly good news this week as children in the 2 to 5 year age group are highly susceptible to obesity, reports CNN. However, there were no significant changes in obesity rates for most ages between 2003-2004 and 2011-2012.

More than a third of adults over 20 were obese that same year, a number that also didn't deviate over the study's time period. Regarding gender and race, the obesity's prevelance is often higher in women and in Hispanic and non-Hispanic black populations.

JAMA's study also coincided with Obama's proposed new rules to limit the types of foods and beverages that can be advertised.

Under suggested federal regulations, companies would no longer be allowed to use logos of high-calorie products such as sugary sodas on cups, vending machines or posters.

Since 2010, the program has remained relatively the same in regard to its goal and mission.

Let's Move! had several objectives under its broader ambition of "solving the challenge of childhood obesity within a generation." Obama wanted to increase physical activity and improve nutrition in schools, overhaul nutrition labels to make healthy choices easier for families, decrease the number of calories in restaurant meals and eliminate food deserts—areas without access to fresh, healthy foods—in cities across America.

In December 2010, President Barack Obama signed the Healthy, Hunger-Free Kids Act into law, which was designed to encourage better eating habits in schools by giving the federal government more authority to set standards for food sold on school grounds. The $4.5 billion act provided more money to subsidize free meals and help administrators offset the higher costs of including more fruits and vegetables in school lunches.