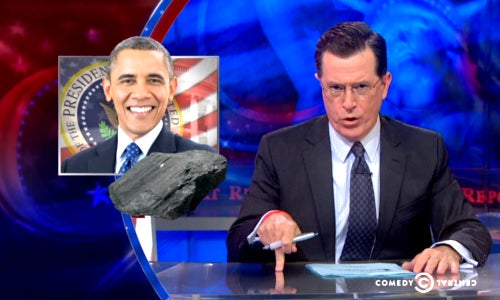 President Barack Obama tried to curb pollution this week as opposed to starting an industry war, but that’s not how some in the media viewed the proposal.

“Obamacare for Air” quickly became the catchphrase for opposers of the carbon plan earlier this week, but another one is quickly gaining ground—Obama’s war on coal.

Stephen Colbert shed some light on his Comedy Central show, mocking the shock tactics of some media members. To them, the emissions proposal represents “the nightmare scenario of doing something” about warming, Colbert said.

“What on Earth is Obama thinking,” Colbert sarcastically wondered. He later had Daniel C. Esty, a clinical professor of environmental law and policy at Yale Law School, to help him figure things on. Not surprisingly, Esty quickly assured Colbert that no war was going on. Just a potential pathway to cleaner energy.

Though he didn’t completely oppose fracking, Esty did provide plenty of reasons why renewable energy is the way for the nation to go.

“You may realize, the biggest solar power country in the world is Germany, which is even less sunny than Connecticut,” he said. “So, there are places that have made this transition begin to happen, and I think you’re seeing job growth in deployment of these renewable resources, in delivering energy efficiency in every house, every business.