Gore to Colbert: ‘I Was Wrong’ About Trump 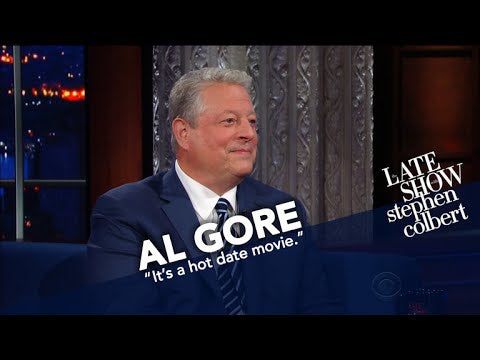 Last night on The Late Show, former Vice President Al Gore joined Stephen Colbert to discuss his new documentary, Trump’s withdrawal from the Paris climate agreement, the massive iceberg that just broke off the Larsen C ice shelf in Antarctica and the benefits of renewable energy.

“I went to Trump Tower after the election,” Gore told Colbert. “I thought there was a chance he would come to his senses. But I was wrong.” However, as Gore explained, “Immediately after that, all the other countries in the world doubled down and said, ‘we’re going to do even more. And here in the U.S., a lot of our most important governors and majors and business leaders said, ‘we’re still in the Paris agreement, and we’re going to meet the commitments of the country regardless of what Donald Trump tweets.'”

"The climate crisis is by far the most serious challenge we face" https://t.co/Vd1HO1lHfx @American_Bridge @The_Anti_Fox

Gore made sure to explain how renewable energy can help combat climate change. He said, “The other really exciting thing is, the cost of electricity from solar panels and windmills has come down incredibly fast, and in many areas it’s now cheaper than electricity from burning fossil fuels.”

Colbert asked Gore what he would say to young people who are losing hope in resolving the issue of climate change. Gore responded by suggesting that young people go see his movie, claiming that “it’s a hot date movie.”

He also strongly encouraged everyone to “use your vote, use your voice, win the conversations on climate change.”