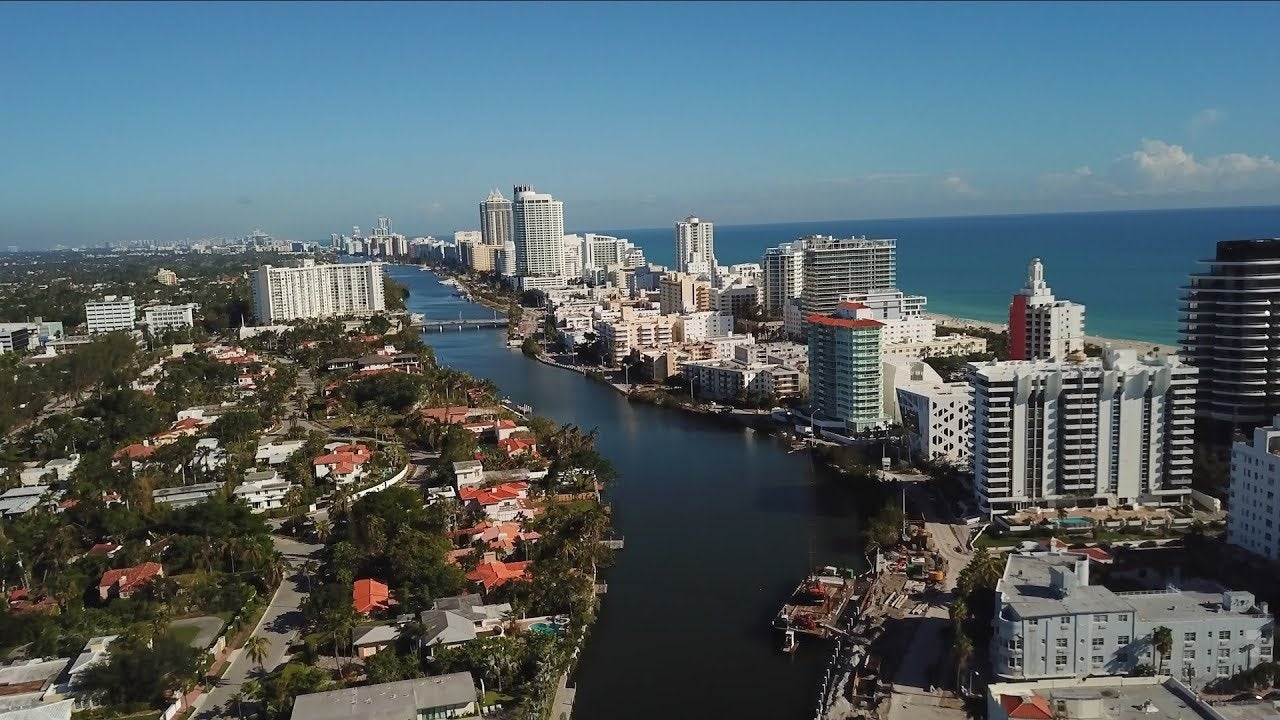 By Arnoldo Valle-Levinson and Andrea Dutton

For Americans who live along the east and Gulf of Mexico coasts, the end of the 2017 Atlantic hurricane season on Nov. 30 was a relief. This year forecasters recorded 17 named storms, 10 of which became hurricanes. Six were major hurricanes (Category 3 or stronger), and three made landfall: Harvey in Texas, Irma in the Caribbean and Florida, and Maria in the Caribbean and Puerto Rico. It was the most costly season ever, inflicting more than $200 billion in damages.

In a study we co-authored with our colleague Jon Martin, we showed that two converging natural climate processes created a “hot spot” from Cape Hatteras, North Carolina to Miami where sea levels rose six times faster than the global average between 2011 and 2015. We also showed that such hot spots have occurred at other points along the Eastern Seaboard over the past century. Now we see indications that one is developing in Texas and Louisiana, where it likely amplified flooding during Harvey—and could make future coastal storms more damaging. 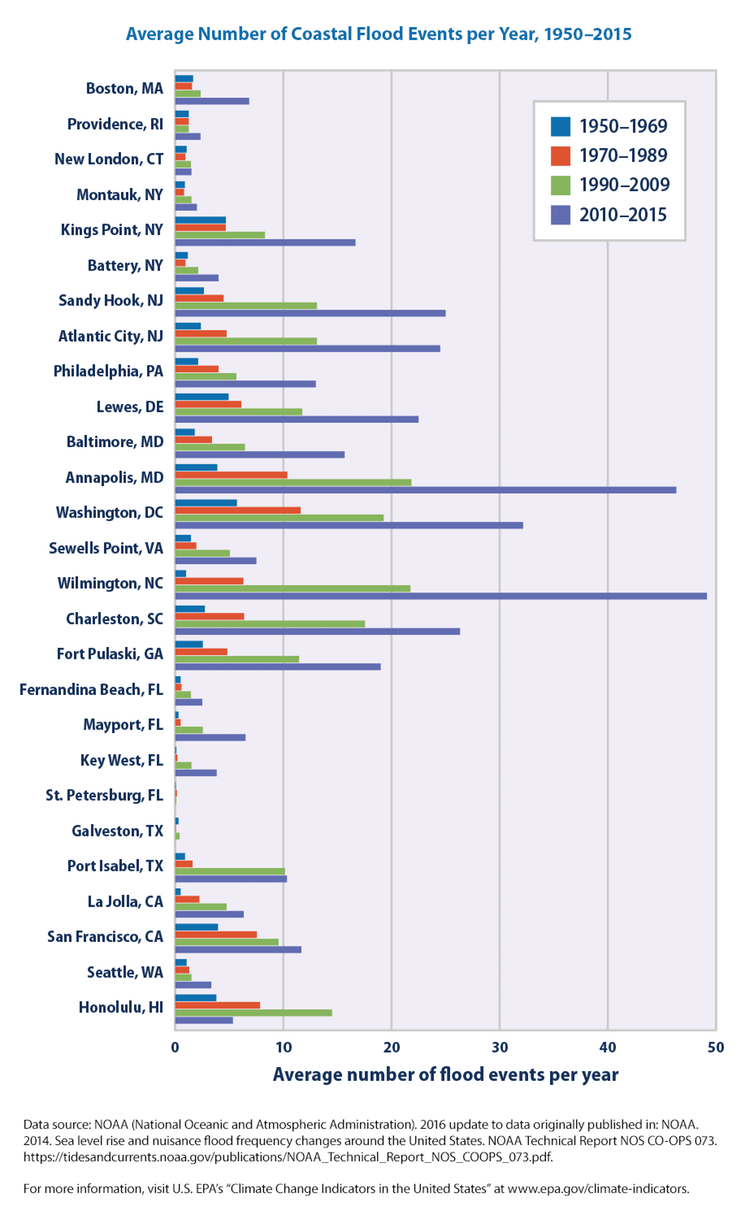 Nearly every site measured has experienced an increase in coastal flooding since the 1950s. The rate is accelerating in many locations along the east and Gulf coasts.EPA

Our work started when Jon Martin showed one of us (Arnoldo) salinity data from water trapped between sediments lining the floor of the Indian River Lagoon in east Central Florida. Here groundwater with zero salinity pools along the coast behind several barrier islands. Jon and his research team were analyzing changes in water chemistry and found that salinity had increased dramatically over the preceding decade. This suggested that saltwater was rapidly intruding into the lagoon.

This process is typically driven either by sea level rise or humans pumping fresh water from underground, or some combination of the two. Arnoldo consulted online data from the National Oceanic and Atmospheric Administration, and found that sea level rise had accelerated rapidly at nearby Trident Pier between 2011 and 2015. While global sea level has been rising at an average pace of about 1 foot per century, this site had recorded an increase of about 5 inches in a mere five years.

When Arnoldo shared this finding with Andrea, an international expert in past sea level rise, she was floored. These rates were ten times higher than the long-term rates of sea level rise along the Florida coastline. Further investigation showed that all tide gauges south of Cape Hatteras showed a similar uptick over the same period. This raised two questions: Had similar rates of rapid sea level rise previously been observed in the southeast U.S.? And what was causing this temporary acceleration? 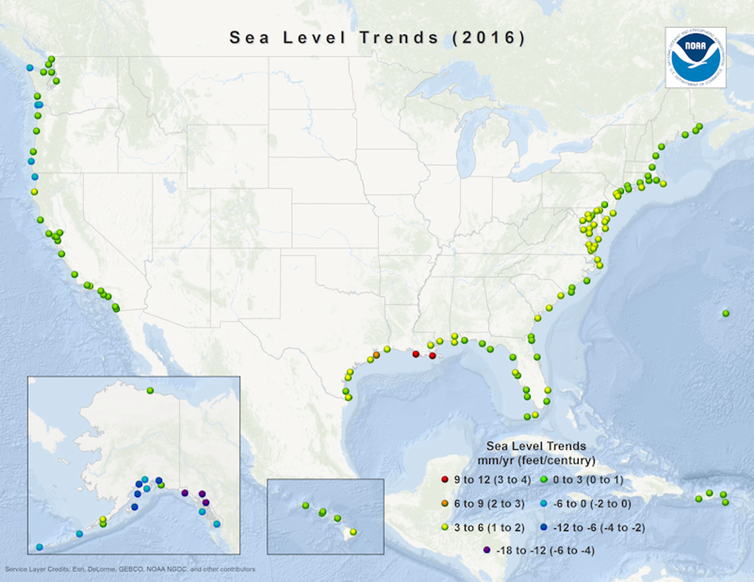 Previous work along the Atlantic coast had identified the area north of Cape Hatteras as vulnerable to accelerated rates of sea level rise, particularly in the context of climate change. Warming of the planet is expected to weaken the Gulf Stream, a powerful Atlantic Ocean current that pulls water away from the east coast and carries it northward. Slowing down the Gulf Stream leaves more water in place along the coastline, raising sea levels.

But this mechanism could not explain a jump of this magnitude in sea levels south of the Cape. Another previous study offered an additional clue. It proposed that the North Atlantic Oscillation (NAO), a seesaw pattern in air pressure over different regions of the North Atlantic Ocean, could explain the shift in the position of short-term variations in sea level rise.

Shifts in the NAO alter the position of the jet stream, wind patterns and storm tracks, all of which affect the distribution of water in the North Atlantic basin. Ultimately, the cumulative effects of NAO on the ocean determine whether water will pile up to the north or south of Cape Hatteras. Thus, water piled up preferentially to the north of Cape Hatteras in the period 2009-2010, and to the south from 2011 to 2015. 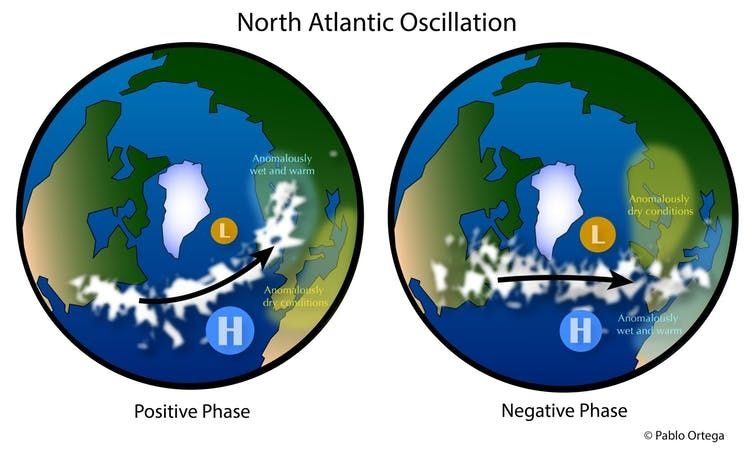 When the NAO is in its positive phase (left), the contrast between high pressure over the Azores and low pressure in the far north Atlantic is stronger than normal, which leads to mild storms over northern Europe and drying over the Mediterranean. UCAR, CC BY-ND

This NAO-related mechanism explained where sea level accelerations might occur along the Atlantic coast, but did not seem to explain their timing. We filled in the blanks by examining tide gauge records over the last century along the entire U.S. Atlantic coast. This review showed that the timing of short-term sea level accelerations, lasting one to several years, was correlated with the accumulated signal of another recurring climate pattern: The El Niño Southern Oscillation, or ENSO, which is the result of an oscillation of atmospheric pressure in the Tropical Pacific Ocean basin.

Although ENSO occurs in the Pacific, its effects propagate across North America, altering air temperatures and wind regimes in the eastern U.S. These changes in wind distributions can affect water transport in the North Atlantic Ocean, causing it to build up along the Eastern Seaboard at times. Other scientists have shown that this transport ultimately determines the timing of short-term accelerations in sea-level rise along the Atlantic coast.

In summary, we found that short-term accelerations in sea level rise have repeatedly occurred over the last century, sometimes occurring south of Cape Hatteras and sometimes focused north of the Cape. These hot spots can exceed rates of 4 inches in five years, and can occur anywhere along the U.S. Atlantic coast. They form when the accumulated signals of ENSO and the NAO converge, displacing seawater toward the coastline.

A wild card for coastal flooding

Our research has serious implications for coastal planners. Global warming is raising sea levels along the entire Atlantic coast, and communities should be preparing for it. In addition, our findings show that sea level can rise and fall around this level by more than 4 inches over a five-year period, due to variability in ocean-atmosphere interactions in the Pacific and Atlantic ocean basins. This variability can occur over the course of five to 10 years.

These hot spots amplify the severity of coastal flooding that is already occurring from storms and king tides. Residents between Charleston, South Carolina and Jacksonville, Florida—a stretch where sea levels are at least 4 inches (10 centimeters) higher now than they were in 2010—have found this out the hard way.

Now we are looking at data from the Gulf of Mexico, where tide stations are also showing water levels which are typically higher than predicted. The increase along Florida’s Gulf coast is past its peak, but Texas and Louisiana are still seeing an acceleration in sea level rise. Accelerations in sea level rise are hard to predict, and it is unclear whether they will become more serious over time. But they make it even more urgent for coastal communities to take sea level rise seriously today.