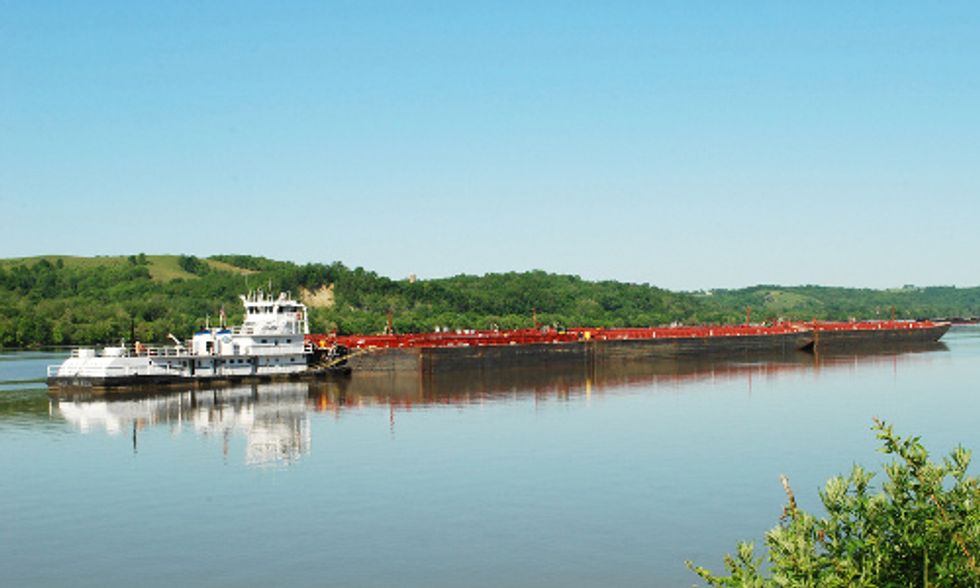 The U.S. Coast Guard, which regulates the country’s waterways, will allow shale gas companies to ship fracking wastewater on the nation’s rivers and lakes under a proposed policy published Wednesday.

The Coast Guard began studying the issue nearly two years ago at the request of its Pittsburgh office, which had inquiries from companies transporting Marcellus Shale wastewater. If the policy is approved, companies can ship the wastewater in bulk on barges on the nation’s 12,000 miles of waterways, a much cheaper mode than trucks or rail.

Under the policy, companies would first have to test the wastewater at a state-certified laboratory and provide the data to the Coast Guard for review. The tests would determine levels of radioactivity, pH, bromides and other hazardous materials. In addition, the barges would also have to be checked for the accumulation of radioactive particles that might affect workers.

Environmental groups, academics and the media have tried to get information about the chemicals used in fracking in the past. However, gas drilling companies have refused to release the specific amounts of chemicals they pump underground to release gas from the shale formation.

Benjamin Stout, a biology professor at Wheeling Jesuit University about 60 miles southwest of Pittsburgh, said the part of the policy about proprietary chemicals is worrisome to him because “it’s the easy out."

“All they have to do is say ‘proprietary information’ and they don’t  have to do anything” in terms of releasing information to the public, Stout said. (Stout is a board member of FracTracker. Both FracTracker and PublicSource are funded, in part, by the Heinz Endowments.)

The gas drilling industry already is exempt from a laundry list of federal regulations, including the Clean Air and Clean Water acts.

The Coast Guard’s letter accompanying the proposed policy specifically asks the public for comment on the disclosure of proprietary information.

The full policy can be read on the Coast Guard’s website where all public comments will be posted.

“We are required to take in consideration those comments before we move to the next step,” said Carlos Diaz, a spokesman for the Coast Guard. “Our role as a regulatory agency is to get it right.”

The question of moving the wastewater by barges has been controversial.

Environmentalists said the possibility of a spill that could contaminate Pittsburgh’s rivers with chemicals isn’t worth the risk. But industry officials said barges are the safest, and cheapest, way to move the wastewater.

“Waterways are the least costly way of transporting it,” said James McCarville, executive director of the Port of Pittsburgh Commission, an agency that advocates for waterway transport. “We look forward to being able to get the trucks off the highways as quickly as possible.”

Stout counters that the risks on the water are huge.

“If and when there’s a spill, that can’t be cleaned up,” Stout said. “That means it’s going to be in the drinking-water supply of millions of people.”

One of the companies interested in the policy is GreenHunter Water, which handles wastewater for major oil and gas companies. Jonathan Hoopes, president of GreenHunter, said the company is pleased that the proposed policy has been published.

“Now that we’ve seen the proposed policy letter, it allows us to do the research that we need to do to comply,” Hoopes said. "You’ll hear a lot more from a lot larger companies than GreenHunter in the near future about this."

Officials from the Marcellus Shale Coalition, which represents gas drilling companies, did not return a phone call requesting comment.

There is commercial interest in moving the wastewater from Pennsylvania via inland waterways to be stored, reprocessed or disposed of in Ohio, Texas and Louisiana, according to the policy.

If approved, the Coast Guard's policy could be momentous for the gas-drilling industry, as the amount and transportation of wastewater is seen as a growing concern for both the industry and its critics.

Each barge could transport approximately 10,000 barrels of wastewater over the nation’s waterways.

Steve Hvozdovich, who is with the advocacy organization Clean Water Action, said his group plans to comment on the policy.

“I’m a little disappointed to hear there’s only a 30-day public comment period,” he said. “Thirty days is not sufficient in my mind.”