Coalition Denounces Legislation That Would Pave Way for Fracking in Illinois 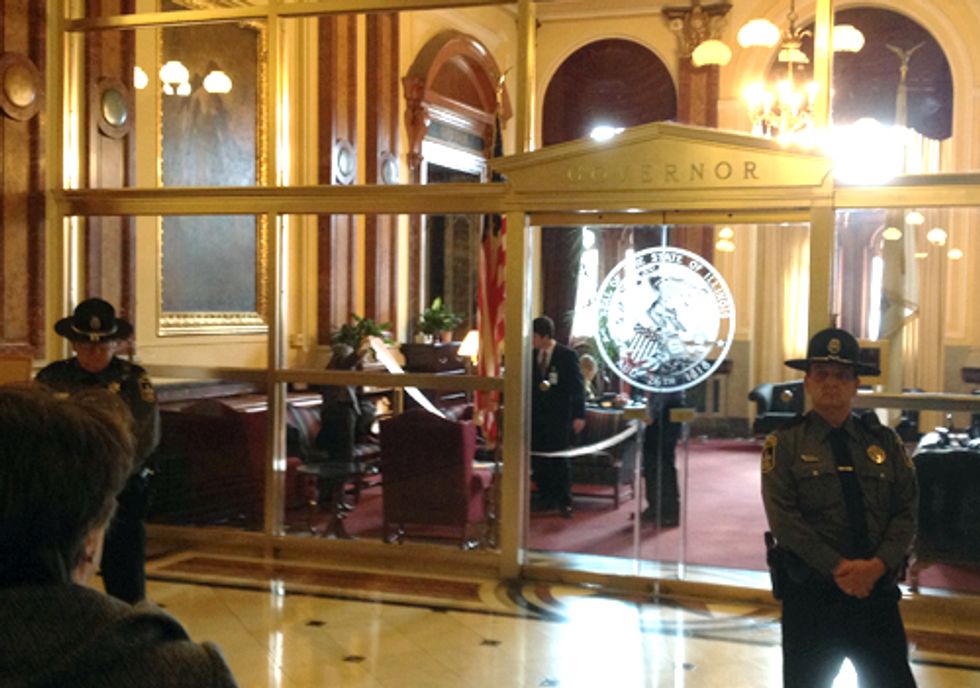 Following the introduction of a bill that would, in effect, serve as a road map for introducing hydraulic fracturing or “fracking” to the state, 15 Illinois-based and national organizations and individuals—including Illinois People’s Action, Food & Water Watch, Southern Illinoisans Against Fracturing our Environment (SAFE), 350.org, Breast Cancer Action and Americans Against Fracking advisory board members Mark Ruffalo, Sandra Steingraber and Josh Fox—urged Governor Pat Quinn and the Illinois General Assembly to reconsider the legislation. In a letter to the lawmakers, the groups outlined how HB 2615 would ultimately expose Illinois residents to the widely documented public health, economic and environmental problems associated with fracking.

More than 50 people gathered in Springfield, Illinois today to deliver more than 600 petitions against the fracking bill to Governor Pat Quinn. Grassroots leaders asked the Governor's staff to protect their communities and oppose the bill. Photo by Jessica Fujan

“This bill is anything but a regulation bill,” says Illinois People’s Action (IPA) leader Mary Bechtel. “It’s really a de-regulation bill. It’s full steam ahead for big energy companies to exploit our state for their own profits, and we’re going to fight to protect our air, water, health and farmland. New York Governor Cuomo just extended his state’s moratorium on fracking because the science is still unclear.  Is science different in Illinois?  We need a moratorium here too.” IPA is demanding Quinn kill the bill and work for a ban on fracking.

Public backlash against fracking has escalated in recent years as more than 300 U.S. communities have taken action against the process. States such as New York, New Jersey and Maryland have taken more measured approaches when considering whether to allow the process, including soliciting input from the public and studying health impacts, steps that Illinois policymakers failed to consider when brokering the terms of HB 2615.

“The people of Illinois are no less deserving of protections than those of New York and Maryland, where caution is the responsible way to approach the raft of unstudied health problems related to hydrofracking,” said Americans Against Fracking advisory boardmember Mark Ruffalo. “We need to fight to protect Illinois from the impacts of fracking and the raft of mysterious health problems we see arising in states where caution has been thrown to the wind. We call on the leadership of Governor Quinn and the Illinois legislature to follow New York’s lead and wait to drill after health studies have been done. HB 2615 is rash, irresponsible and shortsighted.”

The groups opposing HB 2615 consider the bill ill timed and inadequate. High volume fracking is not currently occurring in Illinois and organizations signed on to the letter urged lawmakers to keep it that way. The letter points out, however, that even as a regulation bill, HB 2615 is grossly inadequate in that, among other things, it:

“The oil and gas industry is zeroing in on our communities, despite the objections of many concerned citizens and entire communities,” said Vito A. Mastrangelo of SAFE. “SAFE plans to increase the pressure on our elected officials. We intend to ensure that fracking does not come to our communities—not provide a road map to frack them.”

The detrimental effects of fracking are numerous and well documented. Extracting, transporting and burning natural gas all contribute significantly to greenhouse gas emissions and worsen global climate change. In addition to the carbon dioxide emitted from burning natural gas, significant amounts of methane leak as new wells are fracked and as natural gas is transported. Methane is a potent greenhouse gas, about 33 times more efficient at trapping heat than carbon dioxide over 100 years, and about 70 to 100 times more potent than carbon dioxide over 20 years according to a 2009 study published in the magazine Science. Moreover, more than 1,000 cases of water contamination have been documented near fracking and drilling sites in the U.S.

“Fracking not only pollutes our air and water, it also exacerbates climate change and threatens public health,” said Food & Water Watch midwest region director Emily Carroll. “Illinoisans do not need half measures that open our state to this dangerous process. Governor Quinn and the legislature should take a step back, take a second look at the facts about fracking, and take immediate action to make sure that not a single well is drilled in Illinois.”

As for the public health effects of drilling and fracking, the process has been linked to increased ground level ozone pollution, greater instances of asthma and the discharge of volatile organic compounds into the atmosphere. A 2012 study published in the Proceedings of the National Academy of Science found that, when compared to those who live further away, people living within half a mile of fracking operations face significantly higher cancer risks, as well as a greater chance of other health problems connected to pollution.

“Chemicals used in the fracking process include known carcinogens and endocrine disruptors that can leach into wells and aquifers and mix with drinking water in nearby communities as well as far-off cities,” noted Breast Cancer Action policy and campaigns coordinator Annie Sartor.

“A growing body of evidence demonstrates the connection between toxic chemicals used in the fracking process to increased risk of many health harms, including breast cancer. It is the role of our elected leaders to protect us from toxic chemicals that may increase risk of developing disease, and Illinois legislators must put public health first by rejecting HB 2615, instituting an immediate moratorium on fracking and taking steps to ensure that fracking never comes to Illinois,” she concluded.