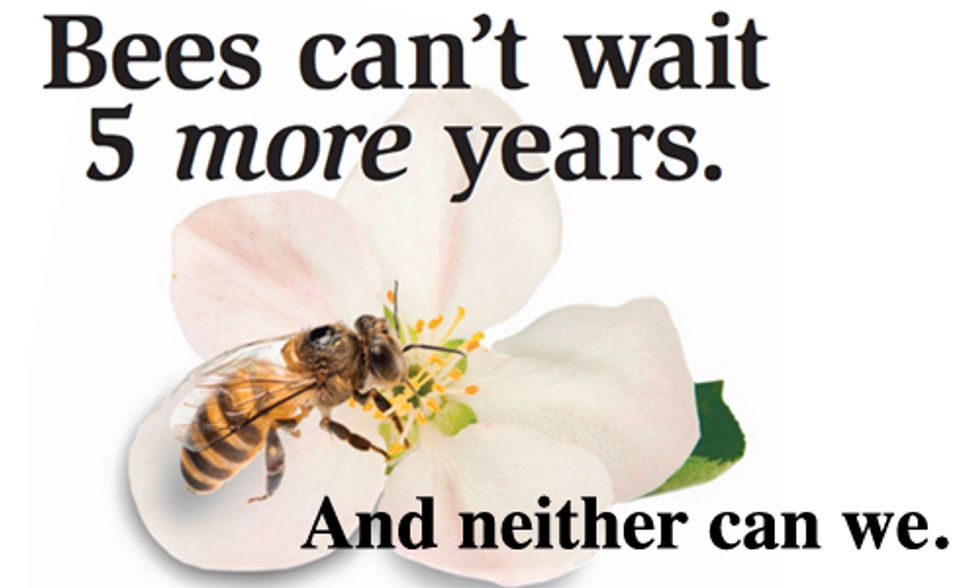 In the name of pollinator protection, more than 60 organizations launched a national media campaign yesterday to bring attention to the severity of bee colony declines due to the use of toxic pesticides. Full-page advertisements ran in the New York Times and six other major papers, according to Beyond Pesticides.

Coinciding with the onset of the European Union’s two-year moratorium on three of the most potent and harmful neonicotinoids, the media campaign highlights the impacts of bee declines as well as encourages readers to call on the U.S. Environmental Protection Agency (EPA) to take necessary action.

“We hope this national media campaign will spur public action to combat this major threat to the environment and to our food system. We must protect bees and other pollinators from these harmful pesticides that EPA has so far failed to safeguard them from,” said Larissa Walker, policy and campaign coordinator for Center for Food Safety.

Beekeepers in the U.S. have been losing, on average, more than 30 percent of their bees each year since 2006—twice what is considered sustainable, reports Pesticide Action Network. Commercial beekeepers lost more than 50 percent of their colonies last year—some even reported losses of 70 percent or more.

Though a multitude of scientific studies have linked bee declines to pesticides, in particular a class of pesticides known as neonicotinoids, the U.S. still allows their widespread use.

“Protecting bees and pollinators is an urgent matter that must bring our nation together to balance our need for a bountiful food production system and a sustainable environment,” said Jay Feldman, executive director for Beyond Pesticides.

One in every three bites of food depends on bees for pollination, and the annual value of pollination services worldwide are valued at over $125 billion, according to Beyond Pesticides. In the U.S. alone, pollination contributes $20-30 billion in agricultural production annually.

“Honey bees play a crucial role in pollinating the world’s food crops,” said Gary Hirshberg, co-founder and chairman of Stonyfield, and one of the ad signatories. “So protecting bees from pesticides is not only good for bees, but also for business; the loss of honey bees is a direct threat to the ability of farmers and food companies to deliver diverse, nutritional foods.”

With the EPA operating on a sluggish schedule—stating that it is at least five years away from doing anything to protect bees from pesticides—the campaign is hoping to put pressure on the agency to complete its review of neonicotinoids, which currently isn't due out until 2018. Until this review is complete the EPA can not take action to adequately protect bees and regulate pesticides.

““The EU reviewed hundreds of scientific studies and concluded that a two year moratorium was a necessary first step. The U.S. has failed to even come close to that standard,” said Emily Marquez, PhD, staff scientist at Pesticide Action Network. “EPA should follow the science and take action to protect bees from harmful pesticides.”

Since the EPA has failed to step up in a timely way, states across the U.S. are taking on pollinator protection themselves. In New York and New Jersey, legislatures have  introduced bills that would ban or track neonicotinoids, according to Pesticide Action Network. Last week in Oregon regulators announced plans to restrict the use of neonicotinoids on trees which was linked to a recent massive bee kill in that state.

“Beekeepers are losing colonies at an unprecedented rate—the losses are too extreme to keep up with, and our entire industry is at risk of collapse unless federal action is taken," said New York beekeeper Jim Doan. "Convening conferences and changing pesticide labels is lip service and window dressing to the issue, but has no substance.”