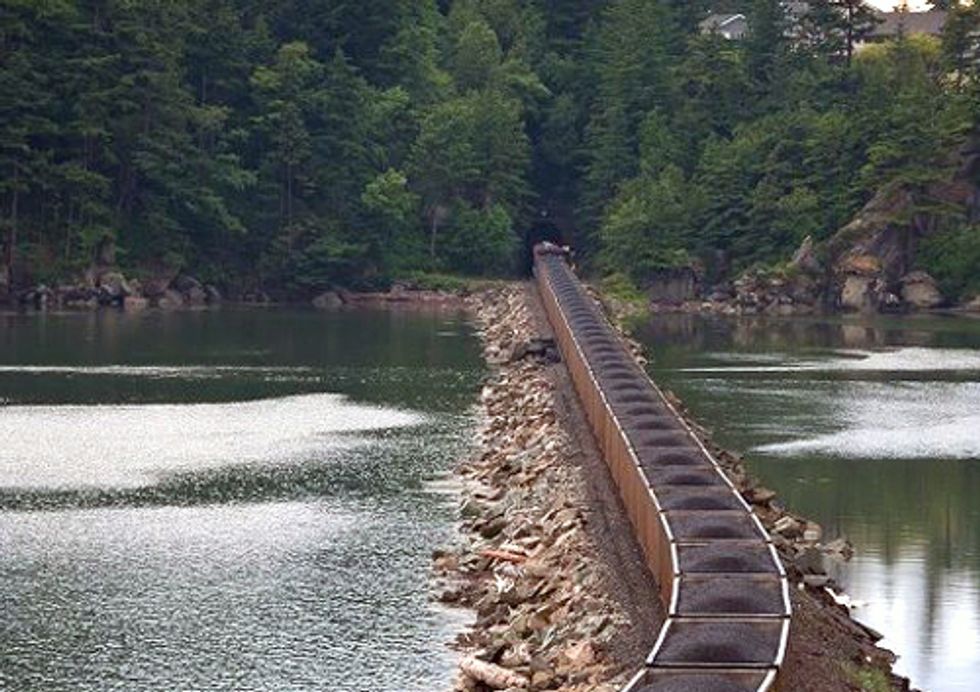 The Sierra Club and its partners sent a 60-day notice of intent to sue to Burlington Northern Santa Fe Railway (BNSF) and several coal companies yesterday for violations of the federal Clean Water Act. The Sierra Club, Puget Soundkeeper, Columbia Riverkeeper, RE Sources for Sustainable Communities and Friends of the Columbia Gorge have found evidence that the companies are responsible for emitting coal into waterways in many locations across Washington.

BNSF Railway, owned by Warren Buffett’s Berkshire Hathaway, is one of the largest coal transporters in the U.S. It is responsible for hauling an average of 480 open-top rail cars carrying coal through Washington daily. Each rail car loses an average of 500 pounds of coal dust per trip. Photo courtesy of Paul K. Anderson / www.paulkanderson.com

BNSF Railway, owned by Warren Buffett’s Berkshire Hathaway, is one of the largest coal transporters in the U.S. It is responsible for hauling an average of 480 open-top rail cars carrying coal through Washington daily. In addition to posting a report to its own website, BNSF also testified at hearings before the Surface Transportation Board that each rail car loses an average of 500 pounds of coal dust per trip. Current coal trains are composed of approximately 120 rail cars, resulting in an average of 30 tons of coal being lost per train trip. Longer trains are expected in the future should new export terminals be built.

“BNSF and other railroads haul coal around the U.S. every day. Coal shippers and railroads know that coal pollution of our waterways is a serious problem and yet for years we’ve watched them point the finger about who pays to resolve the issue,” said Cesia Kearns, campaign representative of the Sierra Club’s Beyond Coal Exports campaign. “The blame game stops here.”

By BNSF’s own figures, the four daily coal trains traveling through Washington heading to Canada or to the state’s last remaining coal plant combine to lose a staggering 120 tons of coal dust per day. Local residents and conservation groups are concerned that the problem will only worsen if coal companies receive approval to move forward with their hotly contested plan to develop five coal export sites in Washington and Oregon, which could send an additional 60 trains through Washington daily.

Coal mined in the Powder River Basin located in Wyoming and Montana breaks apart easily and contains mercury, arsenic, uranium and hundreds of other heavy metal toxins harmful to fish and human health. Under the Clean Water Act, anyone dumping pollutants or fill into U.S. waters must first obtain what is known as a National Pollutant Discharge Elimination System (NPDES) permit or a Section 404 dredge and fill permit.

“Coal is a toxic pollutant and this action today seeks to stop illegal pollution and keep our river free of dirty coal,” said Brett VandenHeuvel, executive director of the Columbia Riverkeeper. “The threat of coal export makes this lawsuit even timelier.”

Chris Wilke, executive director of Puget Soundkeeper Alliance, is concerned about the amount of coal showing up in waterways and what threats the trend poses to aquatic life in the region.“Salmon are hugely important to our region: ecologically, culturally and economically,” Wilke said. “We know salmon are acutely sensitive to the same toxic compounds found in coal and that many of these toxins can be transmitted up the food chain. It’s a very serious issue.”

Also threatened by coal dust pollution is the Columbia River Gorge National Scenic Area, shared by Washington and Oregon. Its natural scenic beauty and ample opportunity for fishing and windsurfing attracts hundreds of thousands of recreational sports enthusiasts every year, making it a top revenue builder in the region. Despite being designated as a National Scenic Area by Congress 1986, coal trains have polluted land and waterways along the 85 miles of train tracks on its Washington side.

“The Columbia River Gorge is a national scenic treasure, but the railroad is treating it like a dumping ground for coal,” said Michael Lang, conservation director for Friends of the Columbia Gorge. Based on BNSF’s reports, each coal train is dumping up to 10,000 pounds of coal into the Columbia River Gorge. “This is unacceptable and illegal. If coal export proposals are approved, coal pollution from 30 full coal trains per day would destroy everything Congress and the state of Oregon and Washington have worked so hard to protect in the Columbia River Gorge,” said Lang.

Paul Anderson, a longtime Bellingham resident and a self-described “dues-paying union member” at Boeing, has long been a critic of the plans to export coal through Northwest ports to be burned in Asia. “I hope that these serious violations will send a strong message to the Army Corps of Engineers that more expansive reviews are needed,” said Anderson.

The Army Corps of Engineers is the agency responsible for conducting an area-wide study of the impacts for all of the coal export proposals, but no announcement of the study has been made and patience is growing thin among residents who feel that the agency has eschewed its obligation.

“BNSF’s rampant coal pollution of our waterways demonstrates the latest in a series of problems with shipping coal through our local communities,” said Matt Krogh, North Sound Baykeeper at RE Sources for Sustainable Communities. “Unfortunately, it’s the perfect example of why we need a robust study outlining the consequences to our health, safety, economy, and climate if we’re increasing coal train traffic nearly ten-fold through our communities.”

BNSF has 60 days to resolve the problem of coal emissions from its trains. If a solution cannot be reached during this time, then the groups will proceed with a lawsuit in federal court.

The notifying organizations are represented by the Law Offices of Charles M. Tebbutt, P.C. of Eugene, OR, Andrea Rodgers Harris of Seattle, WA, and Jessica Yarnall Loarie of the Sierra Club Law Program.

Visit PowerPastCoal.org for more information about the fight to stop dangerous coal exports.