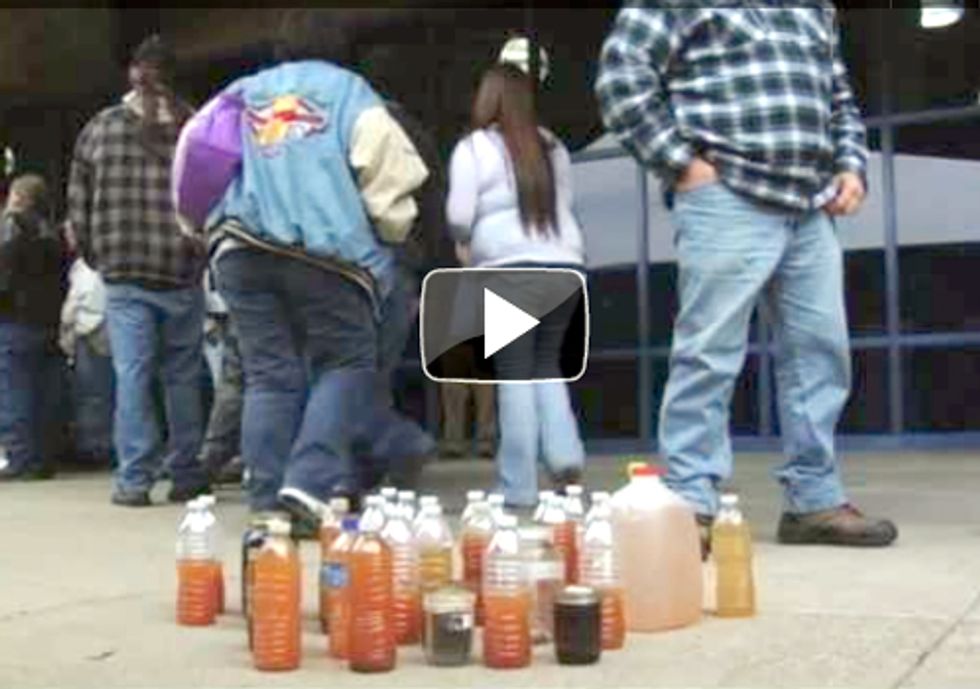 When theatergoers view the premiere of the stunning film documentary Coal Rush at the Atlanta Film Fest next week, the judgment on one of the best kept secrets in our nation's energy policy will be "revealed as water, and justice as a mighty torrent."

Never will theatergoers view a glass of clean water in the same way; never will coal be called "clean" again.

Sitting aside one of the beautiful headwaters in the great Appalachian mountain range, framed by the deciduous forests of life, a former coal operator hauntingly confesses to the enormity of an intentional "spill" that makes the Deepwater Horizon BP oil spill look like a garden leak: "We pumped an ocean into the mountains."

Translation—Over a decade-long period, 1.4 billion gallons of toxic coal slurry (or the waste from poisonous chemicals and water used to wash the coal before it's ship to market) were injected into honey-combed underground mines and leached into underground aquifers, waterways, wells and drinking water sources that poisoned the very coal miners and their families serving the out-of-state Massey Energy coal company.

Transcending the political quagmire of "environmental vs. coal" banter in a powerful and chilling chronicle of a coal slurry tragedy foretold, Coal Rush's poignant work by acclaimed Italian filmmakers Lorena Luciano and Filippo Piscopo reveals the extraordinary health and human costs from the largely ignored effects of post-mining processing, and the heroic efforts of a small legal team and coalfield residents in Mingo County, West Virginia to hold the abominable Massey Energy coal company and its regulatory sycophants account for their polluting actions.

"Don't let them convince you that they didn't understand what was in that slurry," attorney Kevin Thompson says to a 4th generation coal miner and his wife. "They knew."

Allowing residents and Massey operators to tell their side of the slurry story, Coal Rush provides one of the most devastating film portraits of regulatory disregard and ruthless corporate operations in memory. Brilliantly filmed, with a perfect spare banjo soundtrack, Coal Rush follows the 7-year crusade by Thompson and his determined band of attorneys, advocates and hundreds of affected residents to halt the injection of slurry and get Massey Energy and state officials to recognize the looming health crisis and unrelenting cancer corridors in their very mist.

"I was walking around dead," says area resident Donetta Blankenship, one of the Thompson's plaintiffs, who is stricken with liver disease among other elements.

The sheer numbers of health maladies—and deaths—along the coal slurry corridor of disease should be enough to trigger a bit of government action. Neighbors after neighbors with the same diseases mount like casualties in a never-ending war. A nurse tells one resident that she has picked up the bacteria associated with untreated drinking water in a Third World country.

"We had some faith that if your water was contaminated, that your government would step in and do something," says former miner Brenda McCoy. "But they didn't."

Only thanks to regional nonprofit organizations like Coal River Mountain Watch and the Sludge Safety Project are the residents provided with clean drinking water deliveries.

In keeping with Big Coal's legacy of denial—from black lung, to health care impacts on strip mining and mountaintop removal to carbon emissions—Massey Energy simply dismissed concerns as implausible. A Massey official boldly tells the interviewer his notoriously violation-ridden company is in compliance with regulatory requirements—Besides, "there is no credible scientific data that shows relationship between slurry injection and disposal and any adverse heath effects with humans."

When a coalfield resident challenges a state official to drink a jar of his tap water, he receives the same denial—and the same refusal to drink the water, or make any attempt to "understand what the average person has to put up with."

One of the most important film documentaries in years, turning the light on the dark side of all mining, Coal Rush faithfully documents the long-running legal proceedings until the final settlement in the summer of 2011. According to internal documents obtained by the AP, residents in the Mingo County area received an estimated $35 million in damages.

When the coal-fired lights turn back on in the Atlanta theater next week, viewers will be reminded that in the nearly 25 states that mine coal across the country, 17 still allow for underground injections of toxic coal slurry; farmers in central Illinois, for example, were devastated by similar coal slurry leaks in their watersheds over the last decade. There is a temporary ban in West Virginia.

"Water is the most precious resource on earth," the retired coal operator appeals, in his attempt to make amends with his actions, if only to "right a wrong for future generations."