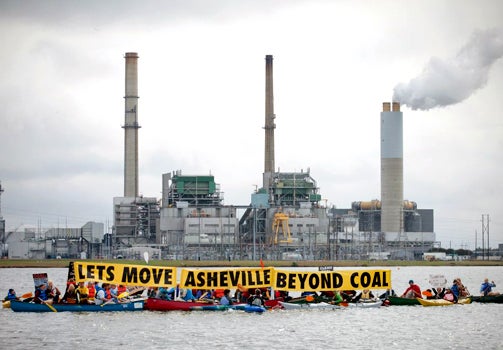 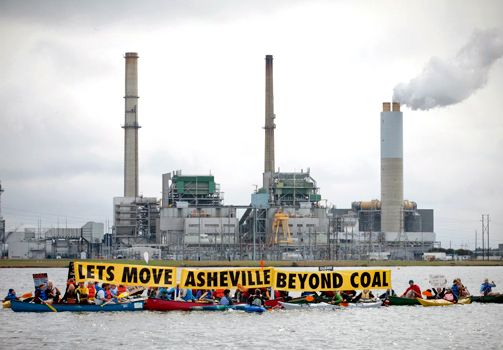 On Sunday, Oct. 14, 70 people gathered on Lake Julian in front of the Asheville coal-fired power plant to protest increased levels of water pollution from the scrubbers at the facility and launch a multi-year campaign to move Asheville Beyond Coal. Photo by Jeff Rich

North Carolina has become the poster child for toxic wastewater pollution from coal fired power plants. In the last 30 days, a staggering array of new information released by environmental groups and a massive Duke University study shows why residents of the tarheel state may be the most at risk from coal combustion waste (CCW) ponds.

Last month, Waterkeeper Alliance and Earthjustice revised the NC coal ash fact sheet with new inspection data from the NC Dam Safety Engineering Division. Site inspections by state agency dam safety engineers at every coal fired power plants across state revealed 29 high hazard coal ash ponds whose failure could cause a loss of human life. The updated fact sheet revealed that there have been structural failures and/or breaches of coal ash pond dams at the Weatherspoon, Cliffside, Roxboro and Sutton coal fired power plants in the last 10 years. North Carolina now ranks number one in the nation for the state with the most dangerous collection of coal combustion waste ponds. The updated fact sheet also revealed that none of the states 37 CCW ponds have composite liners to prevent leachate from contaminating groundwater.

Last week, Waterkeeper Alliance, Cape Fear River Watch, Sierra Club and Western North Carolina Alliance filed a legal complaint with the Environmental Management Commission to require Duke Energy to clean up groundwater contaminated by old, unlined coal ash lagoons at 14 coal-fired power plants that have been leaking toxic substances for decades. That legal filing detailed how coal-fired power plants across North Carolina have systematically failed to clean up their toxic water pollution despite state law requiring them to “take immediate action to eliminate the source or sources of contamination.”

Yesterday, Duke University released an important study documenting high levels of water pollution in rivers across North Carolina from ten coal-fired power plants. The study results showed that the French Broad River and Mountain Island Lake have the highest levels of arsenic contamination of all the sites studied. The Environmental Protection Agency (EPA) drinking water standard for arsenic is 10 µg/L. The Duke University study found 44.5 µg/L of arsenic at the Asheville coal-fired power plant discharge into the French Broad River and a whopping 92 µg/L of arsenic in the Riverbend discharge to Mountain Island Lake. This small lake provides drinking water to nearly one million people in the greater Charlotte region of Mecklenburg and Gaston counties.

The study also found that the Asheville plant had much higher levels of cadmium, selenium, antimony and thallium when compared to other coal ash plants in North Carolina. The levels of these pollutants ranged up to 17 times higher than human and aquatic life benchmarks considered safe. Asheville posted the highest levels of strontium reported in the study.

For the last two years, Western North Carolina Alliance’s two Riverkeepers Hartwell Carson and Donna Lisenby have researched water pollution impacts from the Asheville coal-fired power plant. Today they released new data illustrating the likely reason that the Duke University study found toxic water pollution discharged into the French Broad River among the most polluted in the state. The data shows a very significant increase in the total amount of water pollution discharged by the Asheville plant after scrubbers were added in 2005 and 2006. 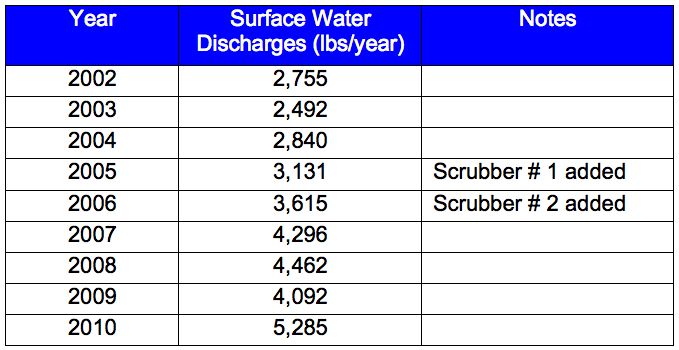 Lisenby utilized data that Progress Energy reported to the EPA in the Toxics Release Inventory from 2002 through 2010. In 2003, Asheville released 2,492 pounds of toxic pollutants into the French Broad River. By 2010, the pollution amount had more than doubled to 5,285 pounds.

“These are very toxic pollutants that have no business in the French Broad River where people swim and recreate every day,” said French Broad Riverkeeper Carson. “The fact that the scrubbers have doubled the amount of water pollution is a great concern and illustrates why we need to move Asheville Beyond Coal,” he continued. 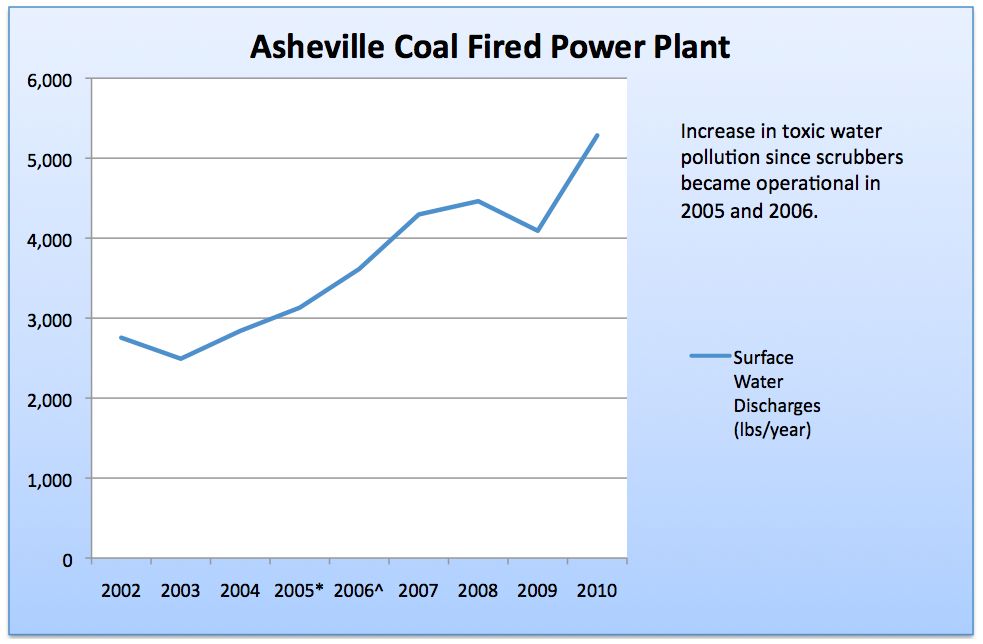 More than 80 percent of U.S coal-fired power plants with a flue gas desulfurization (FGD) system have installed a wet system that uses water to transport pollutants scrubbed from the air into ash ponds. These ash ponds then discharge a much higher concentration of polluted water to surface water. The net result is that scrubbed coal-fired power plants are much more toxic to water.

The Duke University study combined with the dramatic increase in water pollution revealed today by Western North Carolina Alliance’s Riverkeepers shows that scrubbed coal plants have become one of the most significant sources of increased water pollution in North Carolina. This has alarming implications for the rest of the country.

The Duke University study said that coal-fired power plants “…with FGD capabilities produced 58 percent of the electricity generated from coal in the U.S. in 2010.”  More scrubbers with wet FGD systems are proposed or coming on line at coal-fired power plants across the nation. Scrubbed plants tend to be larger coal burning facilities that use and pollute millions of gallons of water daily. If electric power generators continue installing these systems while the EPA fails to regulate coal ash waste as a hazardous waste, the water adjacent to these facilities will become more polluted.

Despite the danger, some senators recently introduced legislation that would prohibit the EPA from ever establishing federal protections against coal ash. Without them, this toxic pollution will continue to flow into our waters, and a problem that already threatens our health and environment will only get worse.

Please take a moment to tell your senators that coal ash is a toxic threat! Passing legislation that limits the EPA’s ability to clean up these sites and protects polluter profits over public health is not what Americans deserve. The coal industry is a powerful force in Washington. But our senators are elected to represent our best interests, not to bow to the demands of big polluters.

Tell your senator to get coal ash out of our drinking waters and protect our communities!

Since coal pollutes water at every step of its life cycle (mining, transportation, combustion and waste disposal), our people and waterways would be much better served if our nation converted to renewable energy. Coal is a deadly fossil fuel of the past. It is not a sustainable energy source for a healthy future. The atmospheric carbon that coal produces at every stage of its use threatens the stability of our climate across the entire planet. Help our country transition to clean energy by signing EcoWatch’s petition telling Congress to expedite renewable energy.