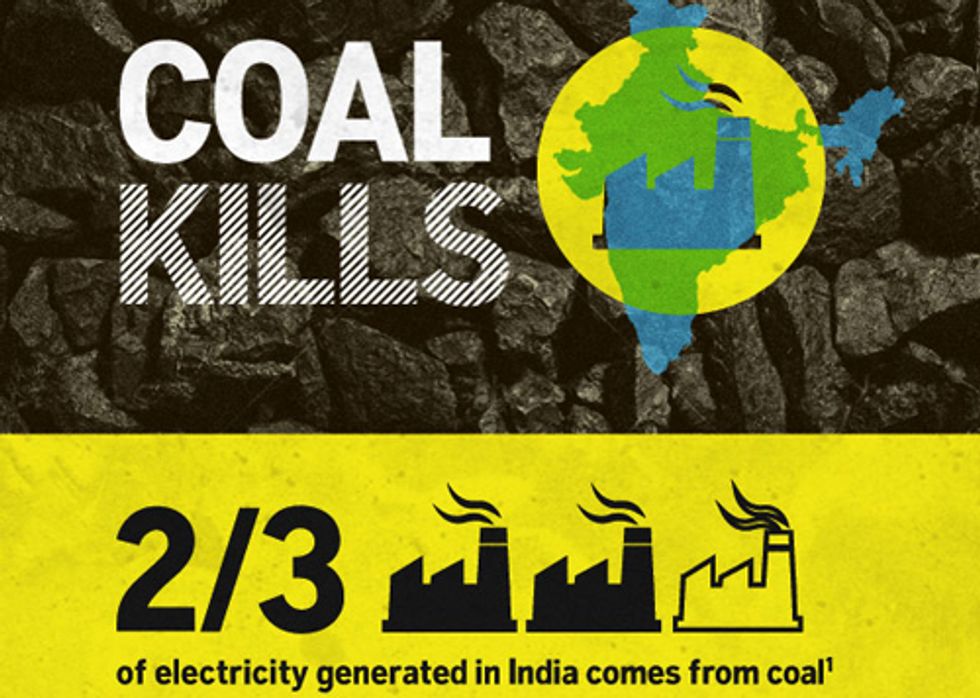 Coal Kills! We knew it all along and now a strong report has confirmed the obvious. A new report from Urban Emissions supported by Greenpeace and Conservation Action Trust shows that in the year 2011-12, 80,000-115,000 premature deaths have been reported due to emissions from coal. The report, the first of its kind in the country also shows that a massive number of asthma cases, totalling to more than 20 million were reported in that single year. The repors states that these numbers are conservative estimates which means that the number of casualties from coal could in fact be much higher.

Through detailed analysis, the report shows that the largest impact of emissions is over Delhi, Haryana, Maharashtra, Madhya Pradesh, Chhattisgarh, Indo-Gangetic plain and most of central-east India. These are regions with high population density and greater vulnerability to impacts of coal. Using a conservative value of Rs. 2,000,000 ($40,000) per life lost, the premature mortality estimates from this study would result in a health cost of Rs. 16,000 to 23,000 crore ($3.2 to 4.6 billion) annually.

The emissions are a result of India’s growing dependence on coal for growth. With plans to dramatically increase power capacity generation through coal, the number of premature deaths is only set to rise. This is a dangerous trend that demands our attention and any more deaths are unacceptable. The alternatives in the form of decentralized renewable energy and energy efficiency are already here and their adoption is critical if we want to curtain these deadly impacts.

We need a moratorium of further mining in India and power plans near densely populated areas, we need a strong movement against coal! The India Beyond Coal project of 350.org is aimed at building the narrative against coal and pushing for the alternative solutions that already exist. Our day of action on Nov. 10, 2012 showed that there is a growing fight against coal and the results of this report will only push us to do more to safeguard the health and lives of millions of Indians.