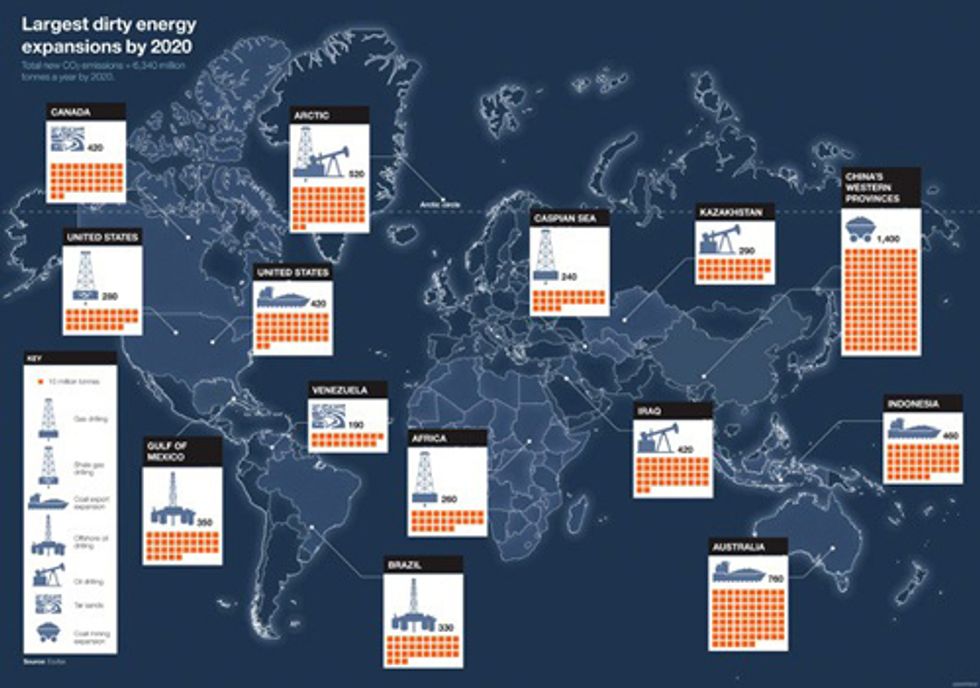 The 14 carbon intensive projects highlighted in Point of No Return from Greenpeace International range from massive coal expansion in Australia, China, the U.S. and Indonesia, to oil expansion in the tar sands of Canada, the Arctic and Brazil, to new gas production in the Caspian Sea and the U.S.

Groundbreaking analysis by consultancy Ecofys for the report shows by 2020 these 14 projects will increase carbon dioxide (CO2) emissions by six gigatonnes a year. The International Energy Agency says despite years of government promises to reduce emissions, CO2 emissions are already at a record high of 31.6 gigatonnes.

The Ecofys modeling found that the yearly CO2 emissions from these projects will be higher than the total U.S. emissions and will lock in catastrophic global warming.

“The same Australian Government warning us that recent deadly heat waves are a sign of things to come is also presiding over a globally significant expansion of coal exports, the resource which is driving climate change,” said Greenpeace CEO David Ritter. “We are willfully sabotaging our own future.”

In a one-page advert in Australia’s national media on Jan. 14, eminent scientists and academics joined the call to end Australia’s coal export expansion, in order to "prevent global warming running out-of-control and destroying lives and livelihoods here and abroad."

Even the World Economic Forum, in its Global Risks 2013 report for this year’s gathering in Davos, warns that we are on course for the global temperature to increase by 3.6 to 40 C, possibly by 6 degrees. These increases will be well above the promise of governments to keep global warming to below a 20 increase.

“Given the human suffering, destruction and economic turmoil of recent extreme weather events, a world with runaway climate change is a frightening prospect. We cannot let that be our legacy,” said Kumi Naidoo, executive director of Greenpeace International, who is meeting key business and government leaders at the World Economic Forum in Davos this week.

The report features an Ecofys pathway showing a 75 percent chance of avoiding climate chaos if emissions peak soon and then drop by 5 percent a year and emissions from the 14 projects are cancelled. Greenpeace’s Energy [R]evolution shows that renewable energy and energy savings can deliver the energy our economies need.

“We are running out of time to prevent catastrophic climate change,” said Naidoo. “The companies promoting and the governments allowing these massive climate threats must replace them with renewable energy right away and become part of the solution to climate chaos.”

Watch this charming video illustrating the impacts of coal exporting on Australia: