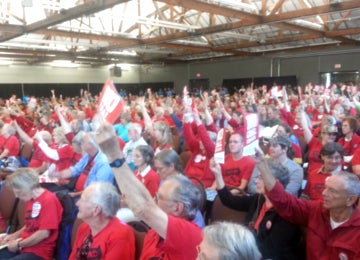 Communities concerned about harmful coal mining and coal export are revving up again for hearings scheduled during the next month in Washington State. On Sept. 17, the first of five environmental impact “scoping” hearings was held in Longview, WA, for a proposed coal export facility in Longview. The Longview project is the second proposed coal export facility in the state of Washington to make its way to the environmental impact statement (EIS) scoping period. The first was the proposed Gateway Pacific Terminal at Cherry Point, near Bellingham, WA, which prompted a comment period and a round of statewide hearings last year. An unprecedented amount of comments were received during the last scoping period, ultimately leading to the state announcing that they would engage in a fairly substantial review for the Gateway Pacific proposal. 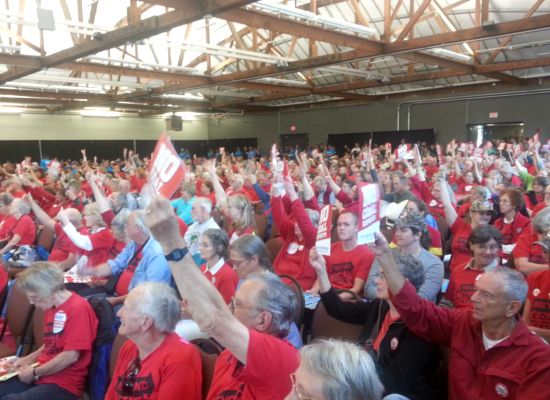 The remaining three highly-controversial Pacific Northwest coal export proposals together would add up to 100 million metric tons of coal a year. Shipping that amount of coal each year through West Coast communities would clog our railroads, ports and roads; risk our families’ health; pollute our air and water; hurt local economies and continue to stoke the climate crisis. In addition to Longview and Gateway, a Coyote Island Terminal is proposed on the Oregon side of the Columbia River at Boardman. Three other proposals have recently been scrapped by proponents.

“If coal exports are allowed from any port in the Pacific Northwest, it will significantly accelerate the deadly effects of climate change in the name of profit for corporate shareholders,” said Brett VandenHeuvel, executive director and Riverkeeper at Columbia Riverkeeper, which is a licensed member of Waterkeeper Alliance. “Waterkeepers from China, India, Idaho, Washington and Oregon oppose these proposals and will do everything we can to defeat them,” added VandenHeuvel.

The proposed coal export facility at Longview is named the Millennium Bulk Terminals—Longview, LLC (MBTL), and is currently backed by Ambre Energy North America and Arch Coal. They have submitted an application to export 44 million tons of coal each year, and if built, it would be the largest coal export terminal in North America. 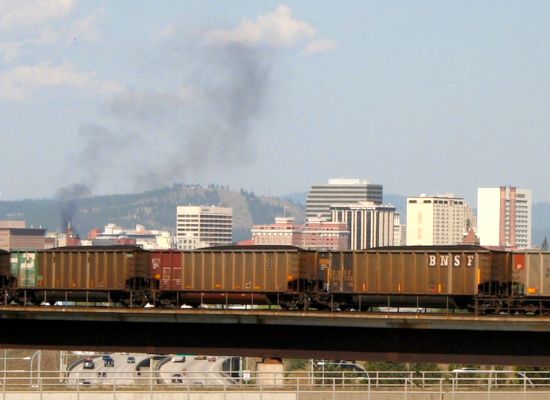 The Longview project has a rocky history. In 2011, a legal challenge exposed internal documents showing that Ambre and their U.S. subsidiary Millennium Bulk Logistics misled Cowlitz County and state officials about the size of their project, claiming it would ship five million tons per year when they planned on more than 10 times that size.

Following the controversy, Ambre withdrew its permit application and in 2012 re-filed for a terminal that would handle 44 million tons of coal/year, the current proposal.

“Coal is the most destructive and dirtiest of all carbon-based fuels,” said Chris Wilke, Puget Soundkeeper and executive director of Puget Soundkeeper Alliance. “Its extraction, burning and even its transport come at a terrible cost in toxic pollution, human health and climate change. This cost is borne out by increases in cancer, asthma, lung disease and neurological disorders in the affected communities.”

“Coal is also the dirtiest of fossil fuels when it comes to climate change, and its evil twin, ocean acidification, increasingly threatens Washington’s shellfish industry and the entire ocean food web” continued Wilke, noting that the Columbia River project will negatively affect waterways around the world, including Puget Sound.

“There is simply no path to controlling carbon that involves continuing to burn coal at current levels,” Wilke said. “It is mathematically impossible, which is why expanding coal burning and exports is pure insanity.”

Across the country, Americans are turning to cleaner energy and phasing out coal power. Because of that, the coal industry has been working on a new plan: strip-mine coal in Montana and Wyoming, transport it on coal trains through Northwest cities and towns, ship it on massive cargo ships off the West Coast, and sell it overseas.

Speak Up Against Longview Proposal

And now there’s another chance to derail a dirty coal export proposal and ask the tough questions that the coal companies have refused to answer.

The public comment period for the scope of the EIS for the proposed Longview coal export facility is open now, and will be until Nov. 18. Information about the proposed project will be available at each of the hearings around the state of Washington, as well as via the official EIS website established by the three agencies involved in the process.

“These coal export projects are drawing unprecedented resistance from communities across the Northwest because they are bad for the environment, bad for the economy and bad for our communities,” said Crina Hoyer, executive director for RE Sources for Sustainable Communities. “I’m impressed by the well-informed, articulate scoping comments that we’ve heard for both the Gateway Pacific project and now the Millennium Bulk project. Community members are speaking from the heart and they’re saying, no to big coal.” 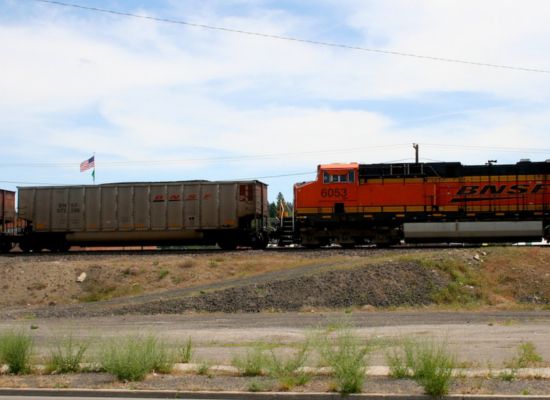 As it was last year with the EIS scoping process for the proposed Gateway Pacific Terminal at Cherry Point, the unified message for these hearings is:

The strong opposition to the proposal follows recent news that a majority of voters in both Washington and Oregon now oppose plans to export coal from Northwest ports, opposition that has grown by double digits in the last year.

“This poll confirms what has remained consistent throughout the debate about coal exports: the more people learn about the issue, the more they are opposed,” said Beth Doglio, co-director of Power Past Coal. “It’s like an onion: the more layers you peel back the more you realize what a stinky deal this would be for our communities, economy and planet.” 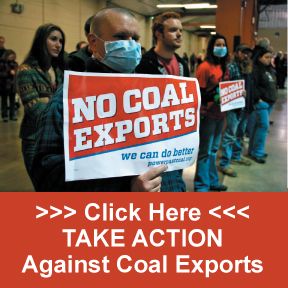