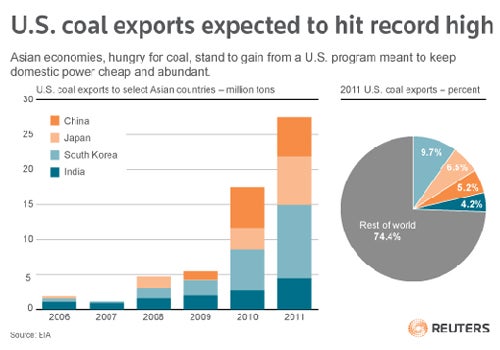 Here’s an energy-related foreign policy issue that isn’t getting any campaign attention: Coal exports are booming, fueling a surge in global warming pollution—and American taxpayers are picking up a good portion of the tab.

The latest figures from the Energy Information Administration shows just how strongly coal exports have risen. Boosted by growing demand in Asia, the U.S. is on track to ship record amounts of coal overseas this year, surpassing the previous all-time high set in 1981.

If coal exports—mostly steam coal for power generation—continue on pace through the rest of the year, it’s possible they could surge past previous projections for a record year. However, EIA says exports have fallen slightly in the second half of the year due to the global economic malaise and a slowdown in China. But that still won’t stop it from breaking the previous record:

Exports in August, the latest data available, reflect some of the weakening global demand for coal, falling 2 million tons from the record June levels. While declines in export levels inject some uncertainty, exports remain elevated with lower August exports still 13 percent above August 2011 levels. As a result, 2012 is still expected to surpass the 1981 record.

This increase in exports marks a significant reversal from the general downward trajectory of U.S. coal exports beginning in the early 1990s, which bottomed out in 2002 just under 40 million tons, the lowest level since 1961. Coal exports in 2011 rose 171 percent from 2002, with only a brief interruption by the global recession. Export growth accelerated after the recession, with consecutive post-2009 growth of more than 20 million tons per year, a level of growth not seen since the 1979-to-1981 export boom. Current data for 2012 (through August) show coal exports are growing even faster, and should more than double 2009 export levels, buoyed by growth in U.S. steam coal.

Asia didn’t get much attention in last night’s presidential foreign policy debate. But if we’re considering energy policy (which the candidates did not), the graphic below shows why the region is an important factor in our policy decisions. In 2011, four Asian countries—China, Japan, South Korea and India—made up slightly more than a quarter of U.S. coal exports. And with coal consumption in the region expected to nearly double by 2020, a lot more coal could be headed from America’s mines to Asia’s power plants and steel mills. 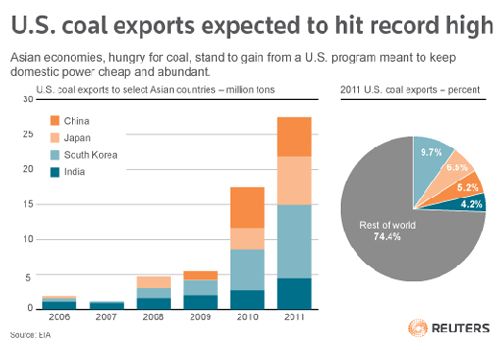 So why should the U.S. taxpayer care? As journalists and analysts have pointed out time and time and time again, companies sending coal to be burned in other countries are getting access to taxpayer-owned lands for very cheap. Much of the nation’s coal comes from the Powder River Basin, which is located on lands in Montana and Wyoming managed by the Bureau of Land Management.

Over the last 30 years, the Bureau of Land Management has held “auctions” with one bidder and handed over the resource for next to nothing, keeping coal prices artificially low. (In the latest “auction,” Peabody Energy—the largest private coal company in the world—secured taxpayer-owned coal for $1.11 per ton. The company will likely be able to sell it in China for around $100 per ton).

According to a report from energy analyst Tom Sanzillo, this leasing process has amounted to a $28.9 billion subsidy to the coal industry over the last three decades. When Americans were consuming most of the coal, the issue didn’t get a lot of attention. But now that natural gas is displacing coal consumption in the U.S., companies are doing all they can to push their product to other countries—meaning that indirect subsidy is also going overseas.

So you get the situation we’re facing today: Americans are paying for large companies to dig up coal at bargain prices, sell it to other countries at market prices, and subsidize their global warming pollution.