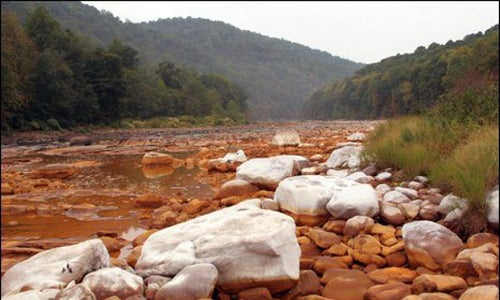 Vaida Lilionyte-Manthos holds a B.A. in History and Anthropology from Vilnius University and Master’s degree in Political Science from West Virginia University (WVU). Originally from Vilnius, Lithuania, she lives in Shepherdstown, West Virginia with her husband David. Mrs. Manthos is pursuing her doctorate in political science, also from WVU.

As a teenager I truly believed that America is the perfect country where everyone cares for their environment and uses all their natural resources wisely. However, my opinion changed radically when I came to Western Maryland and then West Virginia to study. I could not understand why some of the streams are so suspiciously orange and without any fish or aquatic plants; but soon I learned that this “suspicious color” comes from the acidic drainage of old coal mines. 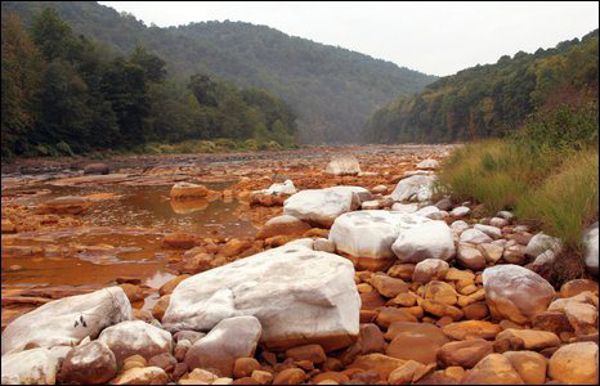 The Cheat River in North Central WV, though significantly improved now, ran rust-red for years after a mine blowout in the 1990s.

I was surprised to learn Appalachia was plagued by a wide range of environmental issues and problems which have never been properly addressed. Failing to learn from history, the region loses its iconic ridges to mountaintop removal strip mining and suffers from a resurgence of black lung disease while disasters keep repeating year after year: from the Upper Big Branch Mine disaster that claimed 29 lives in 2010 to the Elk River chemical spill in 2014 that poisoned the water supply of 300,000 people in nine counties.

I study Political Science at West Virginia University and once I moved to West Virginia I realized how important the coal industry had been to this state, at least in the peoples’ mind and their rhetoric. It seems that any anti-coal speech in WV equates to political suicide. Natalie Tennant, the Democratic nominee for U.S. Senate understands this, and in a recent TV ad, she defends the coal industry by threatening to figuratively cut off power to the White House and accusing Obama of not supporting hard working coal miners. This West Virginia Democrat’s accusation is strange because President Obama, who is pushing for stronger coal-fired power plant regulations, is also a Democrat.

Recent numbers show that the coal industry only employs about 87,000 people, while clean energy industries employ about 360,000 nationwide (Nesbit, US News; June 3, 2014). Additionally, coal only accounted for 18.1 percent of the total domestic power supply in 2013 (US Energy Information Administration; June 2, 2014), meaning that coal is no longer the main energy source in the U.S., and it has cleaner and safer alternatives.

The question arises why people in coal-producing states are so supportive of this industry despite the fact that coal does not create as many jobs as it claims? As a political scientist I could suggest that this support of the coal industry is related with the strong legacy of natural resource extraction or big industries lobbying influential politicians. However, I believe that the tendency to hold onto the past is much stronger than the actual legacy of natural resource extraction.

I was born and raised under the Soviet Union and I remember what quality of life we had then: empty stores, scarcity of necessary goods, only four car models to choose from, and you had to get permission from the local government to buy one! People did not have the right to free speech, were not allowed to travel abroad, nor could they proclaim religion without consequences. Buying a simple one-room (literally, one room; not just one bedroom!) apartment could be a great challenge, and my list could go on and on. Surprisingly, despite all the hardships under Communist rule, some people in Lithuania and other post-communist countries wish the Soviet Union would come back.

Their explanation is simple: under Soviet rule everyone had a job, regardless the pay, quality or necessity of these jobs. The government controlled every aspect of life. People lived in their little low quality apartment and fought for better food in the stores, but their lives were stable. However, the situation changed once Lithuania became an independent country. Many people were not able to adjust to a changing world, learn new skills or adapt to the free market, so they refuse to accept the collapse of the Soviet Union. 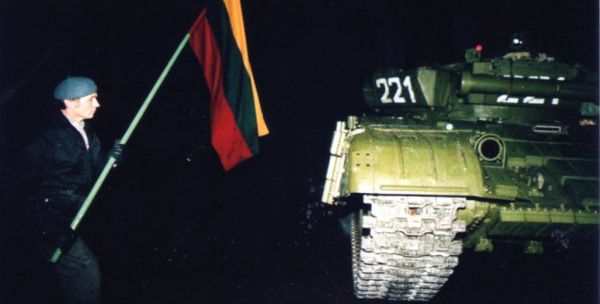 Lithuanian protestor in front of a Soviet tank in the final days of our struggle for independence. But not everyone agrees this was progress. Image: Wikipedia

In a similar way, I think people in coal-producing states hold on to the memories of the great industries that coal supported and the days when jobs were bountiful. Notwithstanding the lives lost in the coal mines, lungs turned black from coal dust and the air and water polluted by the mines and power plants; coal provided stable jobs and a way of life. And just as many believe that coal made America great, there are still people who believe that the Soviet era was Lithuania’s “Golden Age.”

I believe that just because coal or the Soviet Union did some “good” in the past does not mean that we can ignore the harm. It was only after the fall of the Soviet Union that we understood the harm which had been done by the Communist regime. In a similar way, thanks to science, new technologies, research and environmental organizations, we have a better understanding of the consequences of mining and burning coal, for streams, rivers, for public health and for the climate. We should look forward for new ideas and technologies, which brings real progress, instead of pining for the past.