Another Coal Barge Sinks in the Sundarbans World Heritage Site 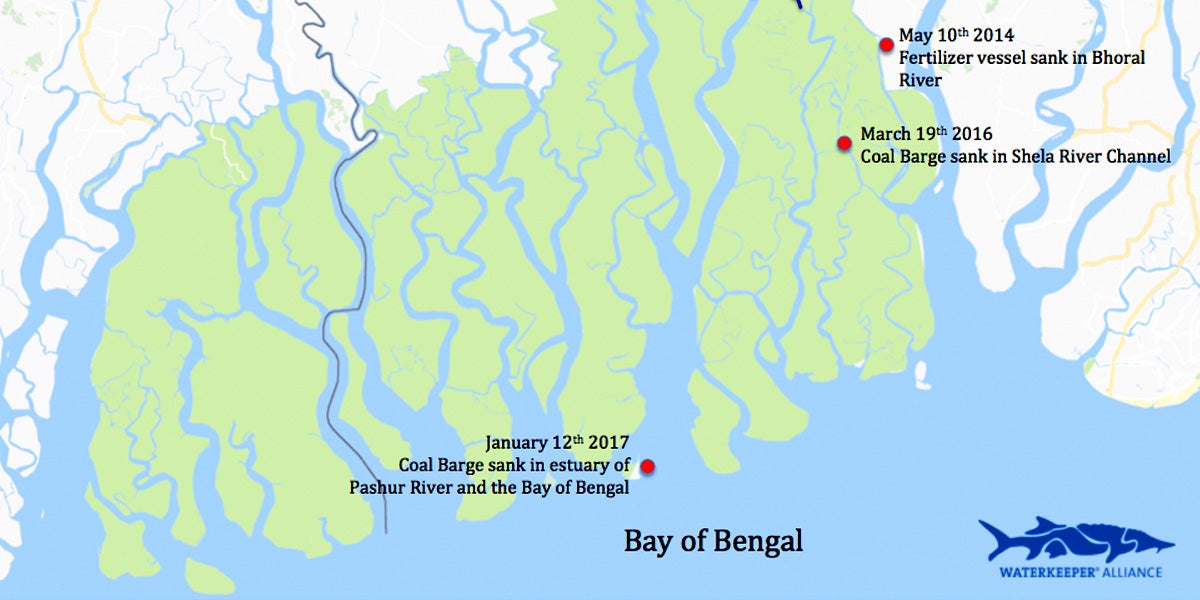 On Jan. 13, the MV Aichgati, a large bulk cargo vessel carrying 1,000 tons of coal, sank in the estuary of the Pashur River in the Sundarbans World Heritage Site. In addition to the large amount of coal, hundreds of gallons of fuel oil, batteries and other toxic contaminants may now be polluting the Sundarbans.

The is the fifth time a vessel has sunk in the Sundarbans over the past two years. In December 2014, an oil tanker capsized in the Chandpai Dolphin Sanctuary on the Shela River, spilling and spreading 350 m3 of fuel oil across at least 40 km of the waterway. Five months later in May 2015, a cargo vessel sank, polluting the Bhola River with 200 tons of potash. In October 2015, a barge transporting 570 tons of coal capsized near the Dhangmari Dolphin Sanctuary in the Pashur River. In March 2016, a cargo vessel transporting 1,245 tons of coal sank in the Shela River. The waterways flowing through the Sundarbans are home to the Dhangmari and Chandpai dolphin sanctuaries, created to protect the rare Irawaddy and Ganges dolphins.

“Five recent episodes of ships capsizing have created a cumulative impact that endangers the rare aquatic ecology of the Sundarbans,” Donna Lisenby, clean and safe energy campaign manager for Waterkeeper Alliance, said. “The Rampal coal plant must be stopped before it further imperils the World Heritage Site.”

The governments of India and Bangladesh are aggressively moving forward with the construction of the proposed Rampal coal-fired power plant which will dramatically increase the shipping of coal, coal ash and gypsum pollutants through the Sundarbans.

“If the Rampal coal plant is built, it will require hundreds more coal ships and barges to travel through the Sundarbans,” Sharif Jamil, coordinator of Waterkeepers Bangladesh, said. “This is one of the many reasons why the World Heritage Centre (WHC) and International Union for the Conservation of Nature (IUCN) concluded that the proposed Rampal power plant poses a serious threat to the Sundarbans and should be canceled.”

In addition to cancellation of Rampal, Waterkeeper Alliance and Waterkeeper Bangladesh supports the shipping recommendations made by the WHC and IUCN in the June 2016 Monitoring Mission Report:

Enforce the permanent closure of the Shela River to all vessel traffic, national and international, and apply speed limits and effective control measures for night and poor weather conditions for vessels navigating along the Pashur River.

Develop an effective action plan and emergency response facility in consultation with all relevant stakeholders to react to any future shipping incidents in a timely and coordinated manner, and consistent with the recommendations made in the United Nations Development Programme (UNDP) oil spill assessment report.

There was grossly inadequate emergency response that failed to remove of sunken vessels and their toxic cargo in a timely manner in all past five shipping disasters in the Sundarbans. Adherence to the WHC and IUCN recommendations is necessary to prevent more capsized ships from spewing additional pollution into one of the world’s most important, water-dependent World Heritage Sites.

“All these shipping accidents show that the leaders of India and Bangladesh are not taking steps to protect the Sundarbans; rather, they are attempting to increase damage and destruction,” Pashur River Waterkeeper Noor Alam said. “This accident again proves the carelessness of the government towards the protection of the Sundarbans and justifies the call to stop construction of Rampal on the banks of River Pashur.”

Waterkeepers Bangladesh and Pashur River Waterkeeper will continue to monitor this latest shipping disaster to assess whether proper clean-up, mitigation and enforcement are completed by the government of Bangladesh.