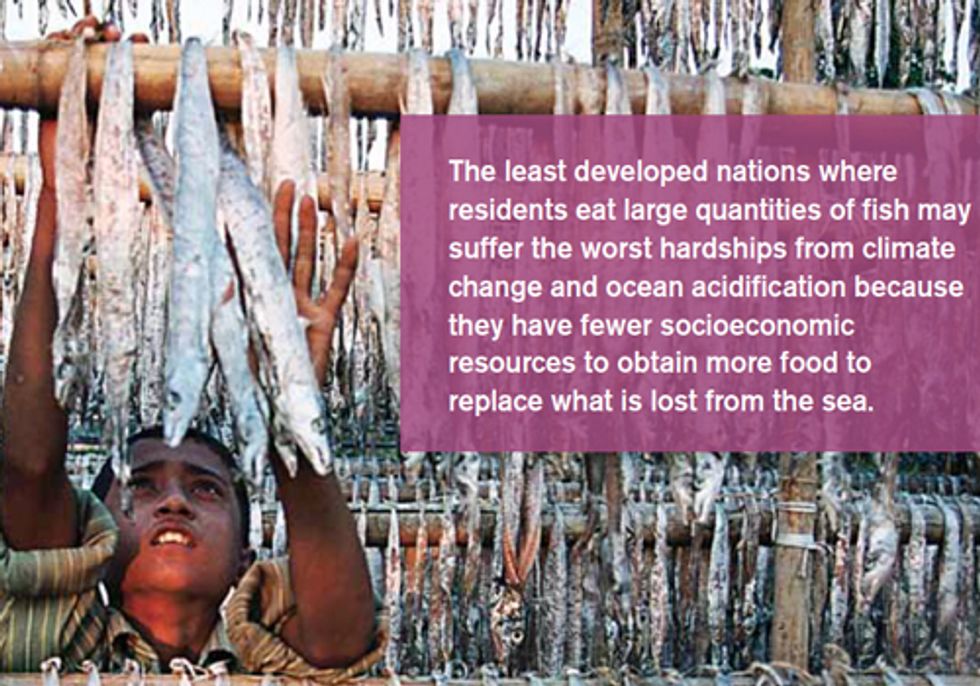 Oceana, the largest international advocacy group working solely to protect the world’s oceans, released a new report today entitled Ocean-Based Food Security Threatened in a High CO2 World, which provides a ranking of nations that are most vulnerable to reductions in seafood production due to climate change and ocean acidification.

While seafood is currently a primary source of protein for more than a billion of the poorest people in the world, rising carbon dioxide emissions are causing the oceans to warm and become more acidic. Rising ocean temperatures are pushing many fish into deeper and colder waters towards the poles and away from the tropics, while increased acidity is threatening habitats such as coral reefs and the future of shellfish like oysters, clams and mussels. In fact, many coastal and small island developing nations, such as the Maldives, depend more heavily on seafood for protein and will suffer the greatest hardships because they have fewer resources to replace what is lost from the sea.

“For most of these island nations, seafood is the cheapest and most readily available source of protein,” said Matthew Huelsenbeck, report author and marine scientist at Oceana. “Most small-scale fishermen simply aren’t capable of following fish into distant waters as climate change and ocean acidification wreak havoc on coastal resources. Reducing CO2 emissions is the only way to address global ocean acidification and the primary means to stop climate change.”

Oceana also found that several large oil-producing nations are vulnerable to threats from climate change. For example, Iran, Libya, Kuwait and the United Arab Emirates are among the nations most likely to be impacted as fish migrate toward the poles.

“Most of the nations that will suffer have done very little to cause climate change. On the other hand, some of them are major oil producers,” said Huelsenbeck. “In either case, it will be the poorest artisanal fishermen that will be hit hardest.”

In the U.S., millions of jobs and billions in profits are at risk if there are substantial losses to seafood capture, processing and sales because of regional climate impacts. It is estimated that rising temperatures will cause the continental U.S. to lose an average of 12 percent of its catch potential by mid-century, causing serious impacts on profitable fisheries in the Gulf of Mexico, Pacific Coast, and the North and Southeast Atlantic.

“The U.S. isn’t immune to the effects of rising CO2 emissions,” said Huelsenbeck. “Take oyster farms in Oregon for example, which have already experienced massive die-offs over the last decade as coastal waters have become more acidic. We also can’t forget about the multi-billion dollar tourism industry that’s under attack as corals reefs and other marine life begin to disappear from our shores.”